We are thrilled to announce the 2016 Poetry Awards shortlists for the Gerald Lampert and Pat Lowther Memorial Awards, the Raymond Souster Award and, together with the Calgary Spoken Word Society, the 2016 recipient of the prestigious Sheri-D Wilson Golden Beret Award. The winners of these awards will be announced on Saturday, June 18 at a special awards luncheon at the Canadian Writers’ Summit. Visit poets.ca/conference for more details! Throughout April, visit our Community page to find interviews with and more information about all the shortlisted authors. 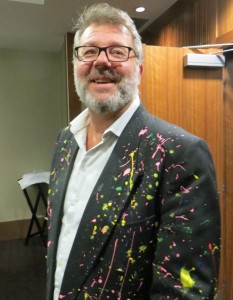 Celebrating its 10th anniversary this year, the Golden Beret Award was created by Sheri-D Wilson—a pioneer of spoken word poetry in Canada—to honour  a Canadian spoken word artist who has made a substantial contribution to the development of spoken word, through the originality and excellence of his or her own writing/performance works, and through involvement in—and contributions to—the expansion of the spoken word community. The award was first presented at the Calgary International Spoken Word Festival in 2007 and carries a $1000 prize.

The League of Canadian Poets and Calgary Spoken Word Society are thrilled to announce that the 2016 recipient of the prestigious Sheri-D Wilson Golden Beret Award is RC Weslowski!

We are pleased to honor RC Weslowski of Vancouver, BC for his influence and impact on spoken word in Canada. He is a multi- talented performer who loves to walk between worlds to see what the ghost dragged in. RC wears many masks including poet, clown, storyteller, playwright, broadcaster, voice actor, coach and educator. Over the past 15 years he has toured North America, the United Kingdom and parts of Europe including many spoken word, poetry and music festivals.