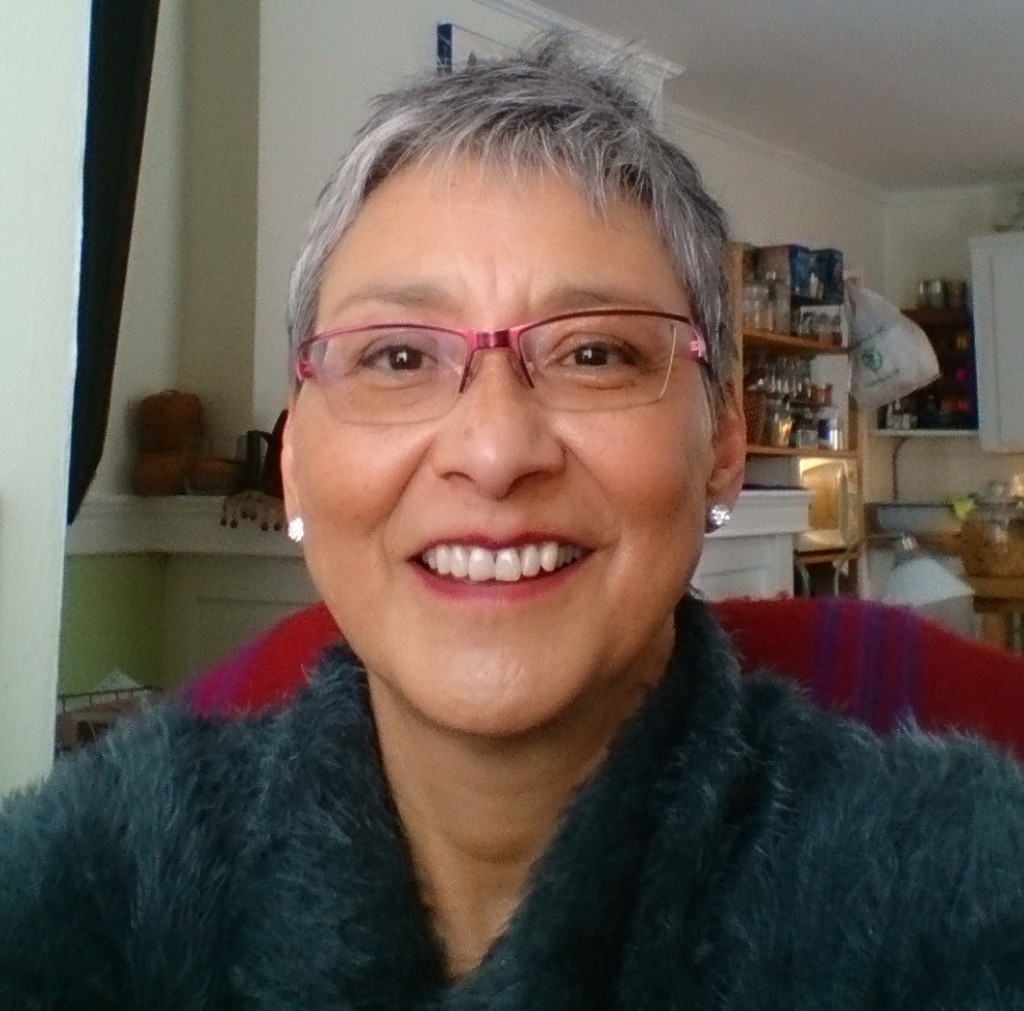 Marilyn Dumont’s book A Really Good Brown Girl won the 1997 Gerald Lampert Memorial Award. This collection is now a Brick Books Classic and in French translation from Les editions Hannenorak Press. Her second collection, green girl dreams Mountains, won the 2001 Stephan G. Stephansson Award from the Writer’s Guild of Alberta. Her third collection, that tongued belonging, won the 2007 McNally Robinson Aboriginal Poetry and Aboriginal Book of the Year. The Pemmican Eaters was published by ECW Press, 2015. Marilyn has been the Writer-in-Residence at the Edmonton Public Library, the Universities of Alberta, Brandon, Grant MacEwan, Toronto-Massey College, and Windsor.  She has been faculty at the Banff Centre – Writing with Style and Wired Writing and advised and mentored in the Aboriginal Emerging Writers’ Program.

My favourite part of writing this book was the research of historical memoirs of the period.

The hardest part was finding new language to write about iconic symbols of “Canadian history” especially the figures of Riel and Dumont and of doing beadwork. 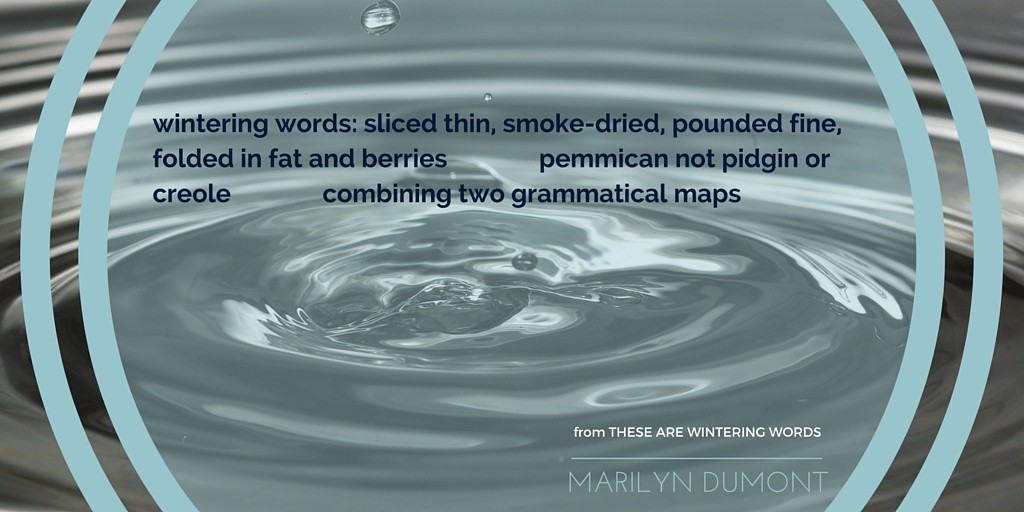 I spent most of my writing time with a history book and my journal. Since I moved around in the process of writing this collection, pretty much  any chair and table would do, and then I’d transfer that to the computer page.   If I impassioned by a subject, that helps me write better.  If I compare myself to others or the English literary tradition, that is a big silencer to writing.

Major Canadian influences were the book Strange Empire by Joseph Howard, visiting Batoche and seeing the bullet holes in the church, and discovering more about Gabriel Dumont – that he established a home in Montana for orphans whose parents were killed at Batoche.

The League reminds Canadians that there is poetry produced in this country and that it’s a vital art form. 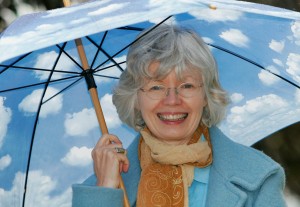 Standard Candles is Alice Major’s tenth poetry collection. It follows her award-winning essay collection, Intersecting Sets: A Poet Looks at Science. Her previous poetry awards include the Pat Lowther prize and the Malahat Long Poem prize. She has served as Edmonton’s first poet laureate, as well as president of the League, the Writers Guild of Alberta and the Edmonton Arts Council.

My favourite part of writing this book – any book – was making the metaphorical connections. You read a phrase like “rectangularization of the morbidity curve” or start thinking about an astronomical idea like the standard candle. You spin it around in your brain to see if you can make it connect with something else – something about life, the human condition. Then, click, it lines up and suddenly you’re in. I love that feeling! 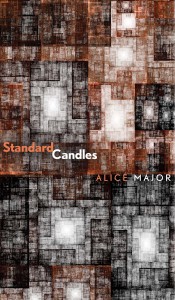 Oh, for me the hardest thing with any poetry manuscript is deciding what poems go in and what stay out. This book covers a lot of territory (well, the universe is a pretty big place), and I still worry whether the last section really belongs – it reflects a different kind of cosmology than the scientific one. But somehow I felt it was needed emotionally.

You take poems out, you put them back in. And ultimately you throw up your hands and say,  “What the heck, there’s no one right answer.” 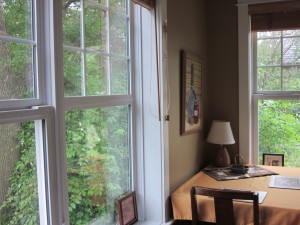 I am very fortunate – I have a home that’s a good place for writing in, with several quiet spots where I can stare out windows.  I do have an office and computer desk, of course. You need that for some stages of writing.

But the computer is hooked to the internet, which is probably the worst place for a writer to spend much time. Your mind needs to wander to be creative, but Facebook is the wrong place for wandering. That can be a real roadblock for me getting things done. 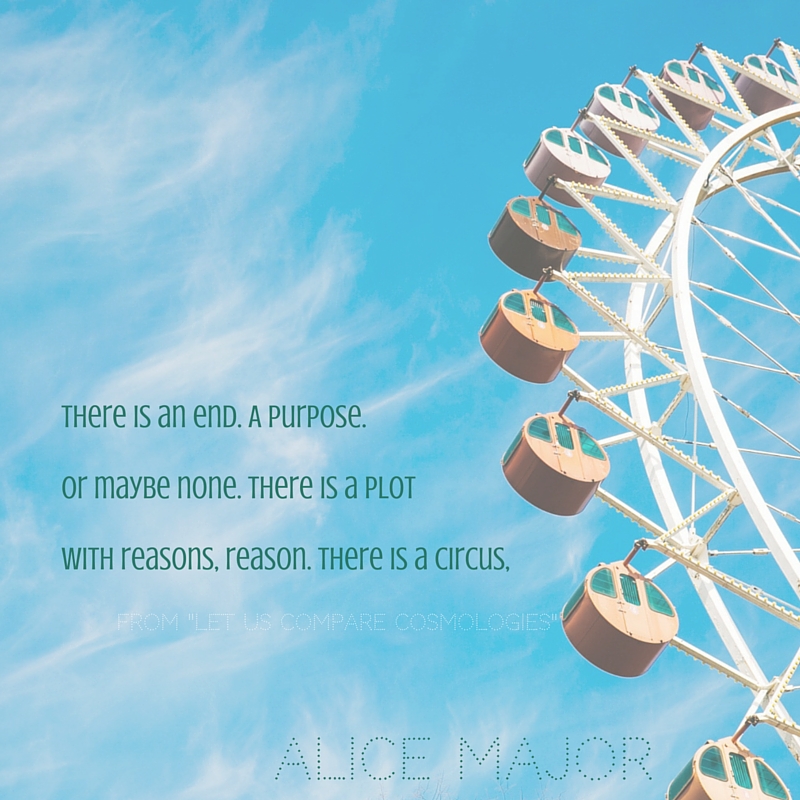 Well, one was this city, Edmonton. My husband works with the inner city and his experience informed much of that last section.

Second influence – well, there’s a faint whiff of Leonard Cohen in the sonnet sequence called “Let us compare cosmologies.” His first book, Let us compare mythologies, was one of the first books of Canadian poetry I ever read. I remember very little of those poems, beyond a general impression that you could mix up classical or religious mythologies with the contemporary world and find poems at the crossroads.

I joined the League after my first book came out in 1992, and that put me in touch with writers across the country. We can feel a bit disconnected out here on the prairie.

Like any organization, you get out of it what you put in. You have to make an effort to pick up the end of the thread and follow it. I made a point of getting to the AGMs (alas, I missed the good old days when the Canada Council would cover members’ travel to get there) and I served on National Council as president. That’s how I made the personal connections. And those connections helped me figure out the poetry landscape.

I’ve also benefited from the reading programs and the competitions that the League operates – three of my books have been shortlisted for the Lowther, which I won for The Office Tower Tales. But the real benefit has been connection to a very diverse group of people who care about poetry.