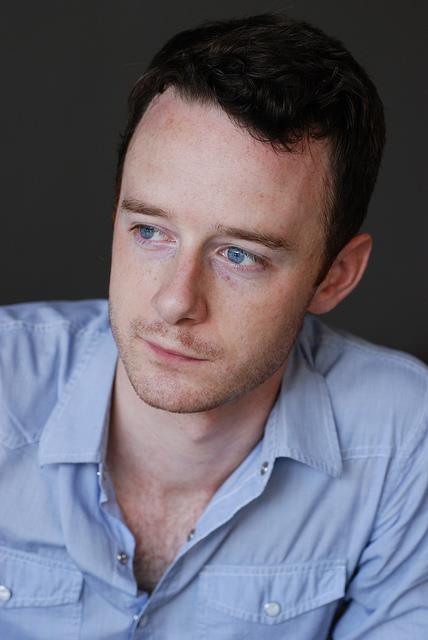 Chad Campbell’s debut collection of poetry, Laws & Locks, was published in 2015 by Vehicule Press. His work has appeared in The Walrus, Maisonneuve, Arc, Brick and Carousel, among other journals, and was anthologized in Best Canadian Poetry 2015. A graduate of the Iowa Writers’ Workshop, and a former teacher at the University of Iowa, he now lives and works in Toronto. 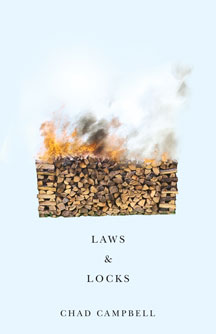 I didn’t have much of an idea of what I was writing, until about three years in. A mentor of mine, James Galvin, pointed out the thread of lineage and madness in my then manuscript, which helped me to drop some drafts and concentrate on others. It was then the book started to coalesce. The year or two after that was a good time in writing Laws & Locks—researching, drafting, and pulling the book together in earnest.

There are a lot of people in Laws & Locks, and even though once they crossed the line into poems they became characters, I felt indebted to them. If I was going to source poems from those lives, I needed to learn as much about them as I could, to honour the scope and integrity of their lives. I don’t think I always succeeded, but it meant learning to modulate my voice, and to get far enough inside the research that I could earn some fluency with the details of their lives. 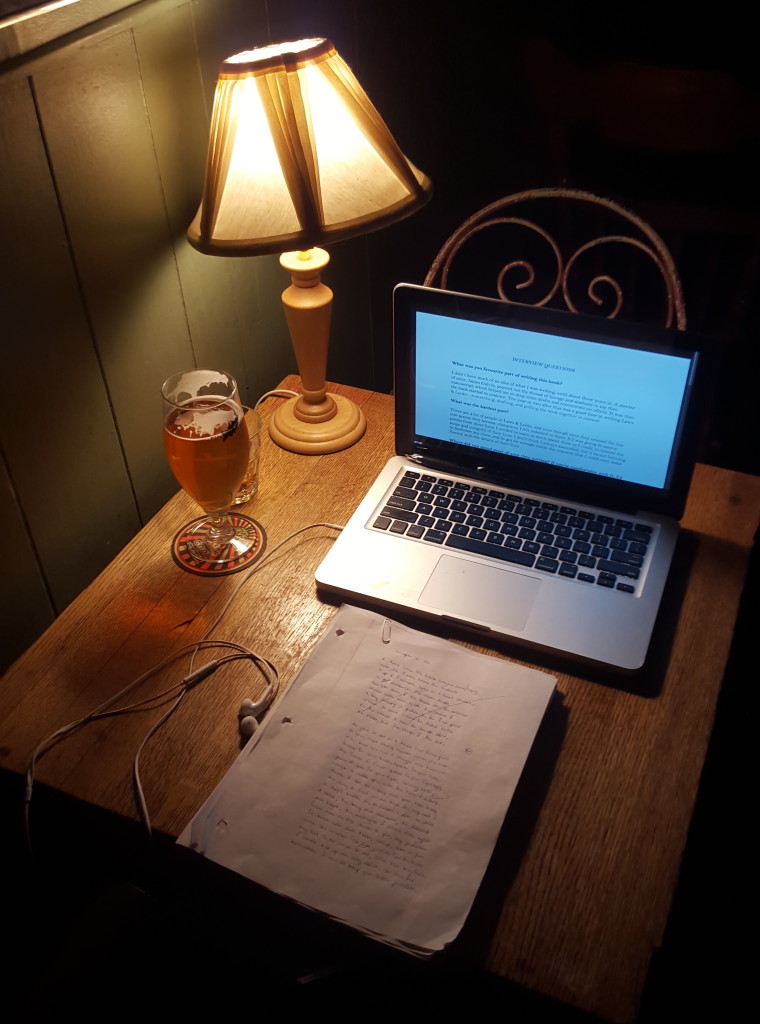 My time was split between Toronto and Iowa while I was writing the book, but in both places the routine was the same. I would research and revise at home during the day, and then shift to bar at night to write new material. In the case of Iowa City, it was my bedroom in the small house I shared with two other writers, and at night a bar called Gabe’s. Other writers didn’t really go there (except for the soul music on Thursday nights), and it had a back patio where I spent most nights writing, smoking, and drinking beer. Here in Toronto, it’s a home office during the afternoon and early evening, and a bar in the east end called The Only.

In terms of writing better, I need to be as immersed as I can in a given subject. I know I’m ready to write when I feel a sort of pregnancy with the material: research, others’ poetry, paintings, landscapes, and so on. Music is really important to the writing too. There are always a few albums that are companions to me over the course writing a poem or a sequence of poems. In the case of Laws & Locks it was Radiohead, TV on the Radio, and Caribou.

Roadblocks? I think over time you become more sensitive to the needs of a given poem: when it needs to be set aside, when it needs another form, when it’s practice for a poem that has yet to be written, and so can be tossed or taken apart for scraps. But I’m still learning all of that, and in writing Laws & Locks I stumbled with each of those all the time. 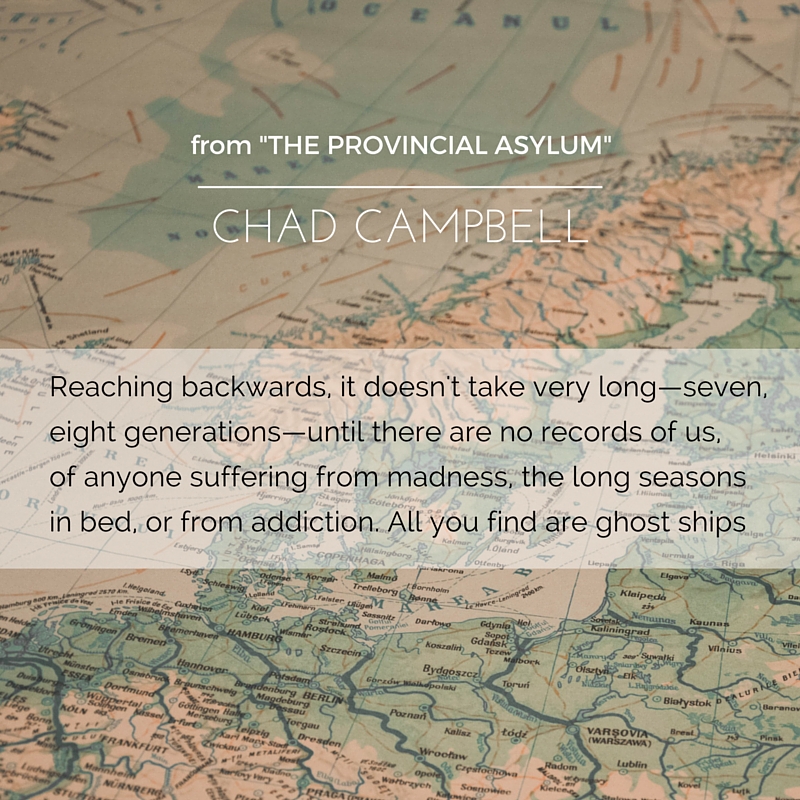 For her sequences, I’d often return to Dionne Brand’s Land to Light On. Tim Lilburn for landscape, and how to evoke place. And my grandfather, Iain Campbell, who, in his retirement, collected many of the journals, photographs, and letters I researched in writing much of the book.

Eight years or so in the academic environment left me feeling tired and top-heavy in the brain department, so I’ve taken a year away to work and enjoy other parts of life. There will likely be a PhD in the next couple of years, but I’ve been working steadily on the next book. I’m about forty pages in. 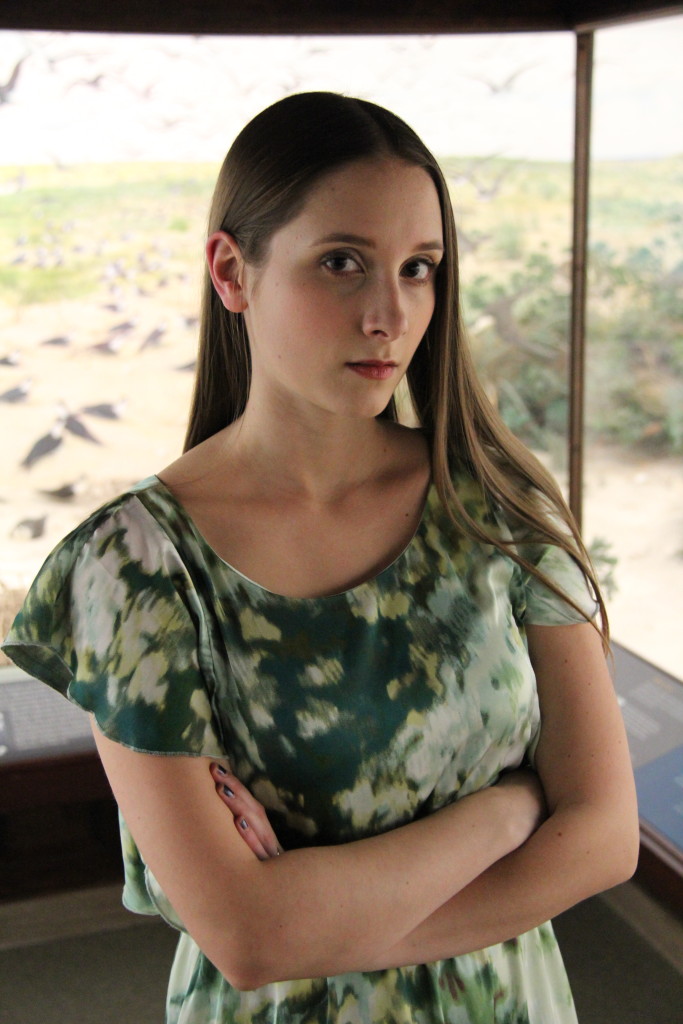 Cassidy McFadzean is a Regina-based poet and graduate of the Iowa Writers’ Workshop. Her first collection Hacker Packer was published by McClelland & Stewart in the spring of 2015. 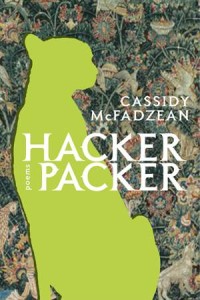 My favourite part of writing the book was revising the individual poems before I sent it out for publication. Once I have something written, I really revel in working with words, moving around parts of a line that aren’t working, and shifting sounds until they seem to click into place. I’ll go through a piece until I feel like I’ve found the strongest words for what I’m trying to express, and eliminated all the bad habits I tend to repeat. I always have a thesaurus and rhymezone.com open on my computer as well.

The hardest part for me is getting that first draft onto the page. Sometimes I’ll start with a line fully-formed and it’s easier, but most of the time I have a frenzied, anxious feeling when I write the first draft, as if I’m running out of time, or as though I’ll lose the thread of inspiration that took me to the page in the first place. I guess I find poetry less about endurance and more about working in charged segments of sustained concentration. I also struggle a lot with self-doubt and anxiety. When I initially sent out drafts of the book and received rejection after rejection, I had to remind myself to have faith in my work and keep going. 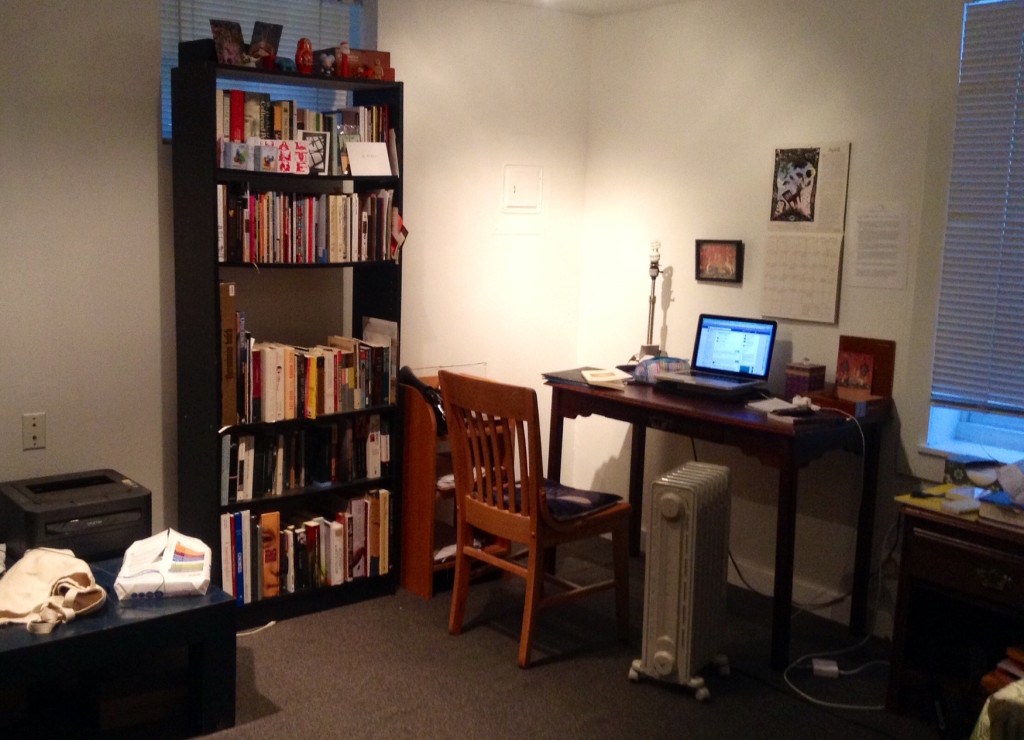 It’s important for me to have books and artwork nearby, as well as trinkets I’ve collected in my travels. I always have music playing, usually pop music, and I go through phases of playing the same album on repeat. Roadblocks for me come from being stuck in my head too much. I have to remind myself to go on walks, and I’ll have periods where I have to work at a coffee shop to get out of the house. I remember my last few weeks in Iowa it was impossible to work at my desk. I was overcome with a feeling of dread from being in my apartment, and would stay out all day at various coffee shops. I find it’s important to listen to gut feelings, and sometimes I’ll spend a few days reading poetry or novels to refocus myself. 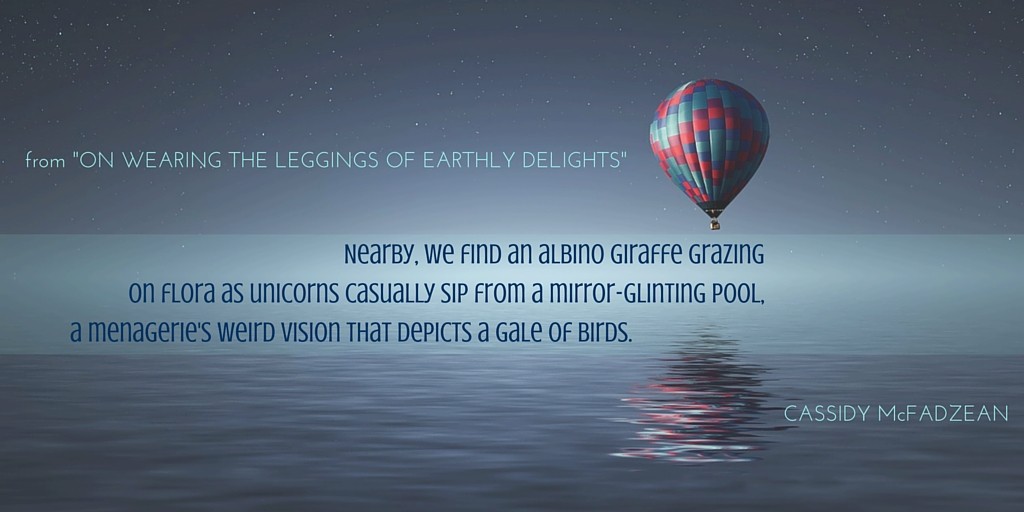 I mentioned obsessively listening to music; I remember listening to a lot of Drake, Grimes, and Moonface while writing this book.

I’ll be spending May at the Banff Centre Writing Studio. It’s my first time there, and I’ll be working on a collection of poetic charms that explore desire and agency. 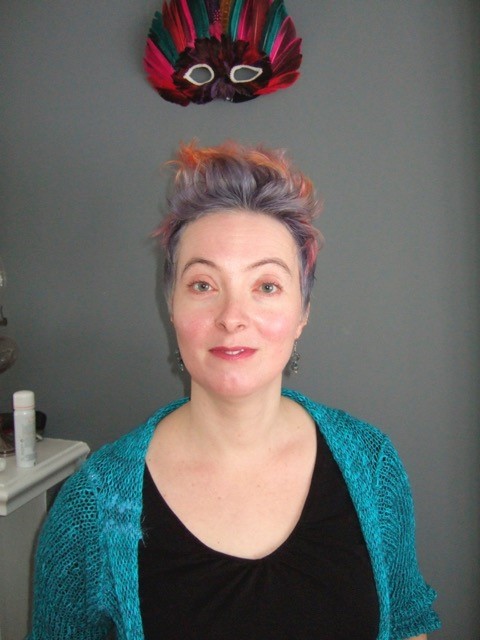 Sarah Tolmie is the author of the speculative fiction novel The Stone Boatmen (2014), the short fiction collection NoFood (2014), and the MQUP poetry collection Trio (2015). Baseline Press published her chapbook Sonnet in a Blue Dress and Other Poems in 2014. Her newest work is a novella collection, Two Travelers, which comes out with Aqueduct Press in June of this year. She has also published poetry and flash in TNQ and Grain. She is the recipient of grants from the Ontario Arts Council and the Canada Council. 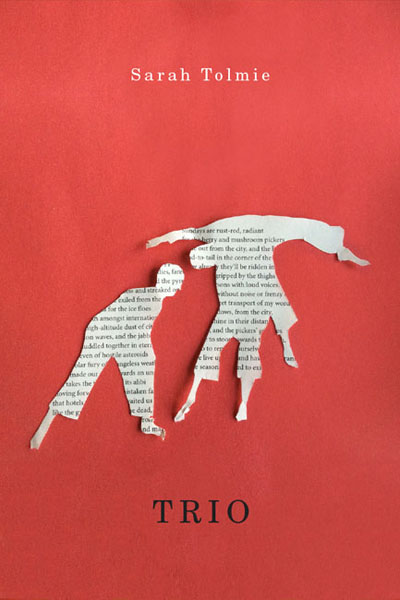 It was working with the sonnet itself, realizing that it is still a living form. It imposed a lot of discipline, enforced clarity, and really transformed the way I write — and edit. It did great things for my bullshit meter.

Cutting the book down. There were almost 400 sonnets at the beginning. It took ages.

I don’t write in any privileged space. The first two books I wrote were on the Greyhound bus. I wrote some of these poems in my study at home; some in my office at work; some in bed; some on local transit buses; a few in parks. I wrote them on a combination of computer, iPad and iPhone, depending on what I was carrying at the time. I have a no-fuss attitude toward writing because I began to do it seriously when my children were babies. I got used to using every second of time I had, whenever and wherever I had it. I edited the massive manuscript in several longer stints in residencies: at Artscape Gibraltar Point on the Toronto Island, and in Banff at the Arts Centre.

That is hard to answer. In broad strokes I think my brand of feminism is quite Canadian. It assumes that women have been professionals for several generations, have rights, make money, and work with men; it is a middle class form of feminism, as women have made up a significant portion of that class here for the last 30 years, at least. Yet women live in that class very, very differently from men. To a large extent that is what this book is about. 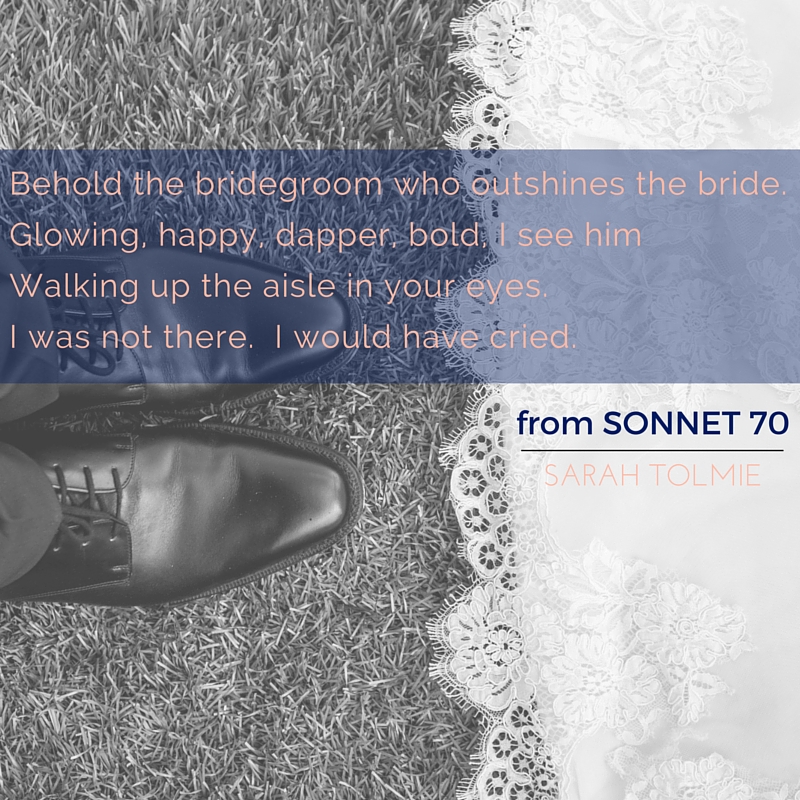 I would also say, perhaps counterintuitively, that my education is Canadian, or reflects Canadians of my generation: that is, it was freely chosen and pretty self-directed. I was free to become a medievalist if I wanted to; I got excellent training at U of T; I went to Cambridge and studied Middle English. The writerly influences on this particular book are almost all from medieval and Renaissance English literature and I have no problem with that. I don’t feel alienated from that tradition — except in being female. That entirely changes the game in love poetry. One of the privileges of being a Canadian woman is that in many respects I’ve been left alone to pursue my own idiosyncratic goals; this is frankly impossible for many women elsewhere. I am grateful for it.

Sofia Samatar. A Stranger in Olondria was a great novel, and its sequel, The Winged Histories, has just come out. I look forward to it. And while she can’t be described as up-and-coming, people should read Carolyn Smart’s Careen.