In Observing the Moon Sneha Madhavan-Reese offers plain-speech poems unruffled by pretence. Gratuitous poetic moves are at a minimum in this tender, accessible book that keeps getting warmer in your hands.

The first stanza of the four-part title poem displays Madhavan-Reese’s natural, speakerly voice and her generous patience in the set-up:

Sometimes, instead of reading in the evenings,

I take out my binoculars and look up

at the moon. Two weeks ago,

it was round and bright, every tone of light,

a pockmarked face, an ancient lace.

It’s a tremendous mother-daughter poem that signals the poet’s preoccupations: family, language, culture, love. Perhaps not quite interested in hard-wringing meaning out of moments, the poet instead points to the meanings starred in her poem’s narratives. I guess I’m also saying that Observing the Moon is not so much a regretful book, though it has some pangs. It’s a book by a grateful poet glad to notice the meanings created by the people she loves. I feel like giving Madhavan-Reese’s book to someone I love; that’s the kind of book it is.

The order of the poems, at times, felt unsurprising. I thought vaguely that I could sense what was coming, though the individual poems had such delightful surprisies. In the poem “Every Morning, Before My Family Wakes, I Invoke Ganesha, God of Beginnings and Lord of Letters,” Madhavan-Reese writes of her daughter:

over all other toys. If she tramples one

with toddler legs, my daughter kneels

to touch the book then touch her eyes,

I learned from my parents,

reserved for only books

I also direct readers to the poems “Mothering” and “Nursing” as well as to the half-dozen very short poems, which are at times pithy, at times kinds of blessings. Those two poems especially show skill and restraint from a writer who finds things in their order:

and where we are seated now. You sink into sleep

in my arms. I drink from a glass of water.

the ordinary shapes of wondrous days.

The Strike Fire New Author Series by Hagios Press is a marvel, and the book is easy to hold. I’d wished occasionally that I could dog-ear pages, but the poems start right from the top. Observing the Moon deserved plenty of dog-ears before I passed it on. 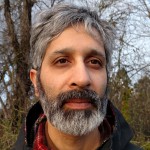 Ayaz Pirani was born in Musoma, Tanzania to parents born in Kapsabet and Tanga. He grew up in Canada and studied Humanities and Writing at Glendon College in Toronto and Concordia University in Montreal. At Vermont College of Fine Arts, Ayaz was a student of the late Jack Myers. Happy You Are Here (The Word Works 2016) is his first book.