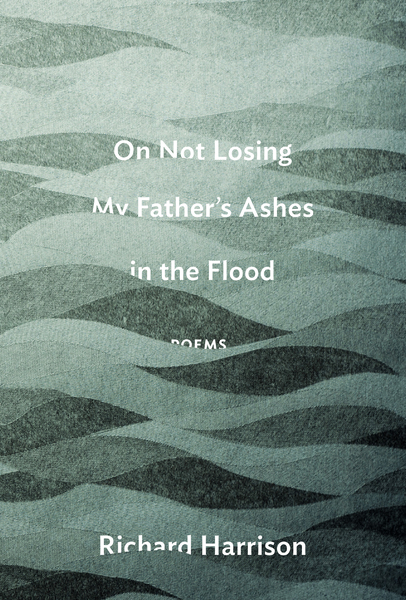 the truth to other people.

Richard Harrison has written an honest, poetic journal of his search for meaning during the aftermath from a) gradually releasing his father, who died in November 2011, and b) recovery from the Alberta floods of June 2013. In addition to beautiful, well crafted poems, the book also includes notes on the poems in the back pages that draw us even further into the experience of this tough but sensitive book. The title poem weaves the two events together, as he searches for his father’s ashes in the flooded basement of his Calgary home and watches friends take apart the water-logged piano:

And the piano, being demolished, made a concert

from the jugular grief of crowed wood, the broken memory of glue

and the squeal of screws no longer holding fast.

It ended with the crash of the great harp

every note the piano knew climaxed at once,

At the news of my father’s ashes lost to the water,

had eaten a pet they’d all fed from their hands.

This book is more than a record of recovery as the author launches on a journey through the dire events that surprise him, many times, through his self-discovery. He is all at once professional, personal, and confessional. What makes his poetry have even more of an impact on the reader is that, simultaneously, Harrison examines his thoughts about what makes a poem or a story, and his experiments with poetic structure.

Long lines stretch across the page with the next line shifted over, again and again. Sometimes there are large spaces between parts of a single line, and in one case (“A Home on Al-Mutanabbi Street”) the poem starts with prose poetry that shifts into spontaneous line arrangements half way along. Then there are the topics of the poems: always, one feels he is peeling away social defenses, like layers of an onion, to finally reveal his inner self with an honesty that is finely honed. It is like being granted permission to look at the world from inside the mind of another.

Harrison searches for the meaning of life in these poems while weaving his two overwhelming griefs and various issues within his own intimate family life. Occasionally, he inserts brighter moments between the warp and weft threads of the story to share his sense of humour (“A Poem in the Arms of Tyrannosaurus Rex”). Yet this book takes time to read, because it is filled with clear perceptions of unavoidable darkness on the human journey. His commentary on a friend’s wedding fiasco, how the passing of the groom’s mother on the way to the event caused the wedding party to contemplate their own potential for a shortened life (“Gone”), illustrates that he is never far from considering either his own loss or lost opportunities to explain himself.

Poetry is play, even in the darkest of its discontents.

Poetry is a sex abuse victim,

and rhyme is the laughter of disasters we survive.

That’s why the hockey book was the door for me

from saying to writing,

from me to you.

(“Saddledome: After the Flood”)

Always, Harrison maintains an eye on his inner self as he relates to the world around him, checking his actions and thoughts against a strong moral compass, or his perception of familial and professional duty, within the context of great literature. At the center of his work is his relationship to his father:

of a man who found beauty everywhere but in himself.

My father taught me a poem is not its words, but the ringing it leaves behind.

In these poems, Harrison rings many bells. Metaphorically, he tears muscle down to the bone to understand the disease that removed his father’s hold on memory and, eventually, removed his father from his grasp (“The World Made New”). He contrasts that loss with poems about the inventiveness of his students (“Slinky”) and the realization that you should never make promises because the future is unpredictable (Now is the Winter). He often focuses on things that are minute and common, such as bees, and sex, and surprises us by saving two mating bees from being trampled on a soccer field – but, midway through the poem, he takes a sharp turn of direction and focuses on language through the purpose and meaning of writing.

And isn’t it odd that it is not odd to talk of living things this way? These days

I feel comforted, thinking of the unfathomable mystery at the heart of a bee

as piece of paper in a bottle, and on that paper, nothing more than one

In fact, the poet in him discovers it is our ability to invent that makes us human, not animal, and our ability to love despite our imperfections that make us human (“When: A Love Poem”). And all the while, Harrison illustrates a complicated relationship to literature, whether it is Shakespeare or Dylan Thomas or Borges, through his memory of the relationship he once enjoyed with his father.

This is the reply to the poet

(“With the Dying of the Light”)

This is a book that grapples with important questions that all human beings ask themselves at some point, including questions about fatherhood and tragedy, as the adult son grieves for the loss of his father, and the man of the house deals with the losses caused by a great flood. It opens windows on important moments in a family and the building of relationships. Speaking about seeing the movie Captain America with his son, twice, he says:

Seeing it again, my son said it was just a man

I always look for hope. In my most fatherly voice, I say,

Congratulations. You’re harder to please. You’re getting a critical eye.

He finds himself challenged to come up with an appropriate fatherly response, and notices the same problem in his writing class, saying: “My voice is almost priestly.” So, he falters when trying to guide his son, telling us that when he addresses the next “discontent”, his son comes back with:

‘I liked it better when everything was good.’

And then there we are together

With nowhere to go but farther away,

Within sight of paradise

On the other side of criticism.

It is as if he has seen a reflection of himself in his son, and his father in himself, and discovers there is no such thing as perfection in human relationships.

Even his relationship to his art must change after the Alberta flood of 2013. So much was lost to those waters, his archives in a disarray, the books he read as he discovered his “writing voice” soaked in water and bursting their shelves, the words blurred and sliding off of paper. He was forced to start over.

More words is the answer to the fact that a book,

fallen into the water,

takes the same second between life and death

to be ruined by its own pages.

and then it will bloat, and relieve itself of everything it held.

(Under Western Water: Returning to Work)

The beauty in this book, what brings it close to being a gem, is the writer’s ability to craft a vision of his inner struggle through personal dilemma that jointly allows the reader to address their own internal inquiry. That vulnerability, that openness, is what makes the poems in this volume ring.

There are parts of myself I’ve kept from the light,

(“A Poem is a Story that Sometimes Happens to Someone”)

Harrison’s ability to consider his relationship to all of his intimate family, in a manner that speaks genuinely of both his struggles and surprises, is the gift he offers to those of us who read his poetic journal.

Sharon Berg is a Canadian author, writing poetry, book reviews, and stories. She has published poems in periodicals across Canada and in the USA, Australia, the UK, and The Netherlands. She also published short stories in various periodicals such as: Quarry, The Fiddlehead, Two Hawks Review, and Big Pond Rumours E-Zine.

One thought on “REVIEW: ON NOT LOSING MY FATHER’S ASHES IN THE FLOOD | BY RICHARD HARRISON”