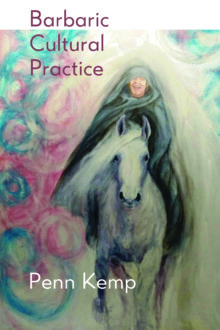 The title of Penn Kemp’s most recent poetry collection reflects her urgent activist response to government announcements she thought could undermine Canadian diversity.  As they campaigned to hold onto power in 2015, the Harper Conservatives vowed to create an RCMP tip line where Canadians could report suspected “barbaric cultural practices” such as honour killings and female genital mutilation. Status of Women Minister Kellie Leitch said the hotline would allow “citizens and victims” to directly reach out to authorities because such, “practices have no place in Canadian society”— but the effect was to demonize new Canadians and polarize society around identity politics.

In this latest collection, Penn Kemp — peripatetic poet and author of more than 25 books — points out the “barbaric cultural practices” of Canada and the West:  proxy wars, poverty and pollution. Her poetic critiques engage the reader with wit and word play. As an ex-patriot Canadian poet based in Hong Kong where freedom is under threat, I could relate to Penn Kemp’s broad, ironic perspective in Barbaric Cultural Practice.

In “Arms and the Boy,”  the narrator watching war coverage falls:

through the scream as if to land
among proud and elegant peoples
divided by civil, uncivil arms.

Women and men cleaving, cleft, bereft.
Dispossessed of a West they thought they knew.
Dis
oriented, where do they turn?

The boy who survives the onslaught of smart bombs, “…cannot speak–/language lost though lies thrive.”

In ”Smog Alert,”  the air is gritty—chewable: “Clouds crowd the mind,  clogging thought.” The city often “fills/our lungs with tiny lumps that hang there”

No matter the seriousness of their subject matter, the poems in this collection avoid despair. A poet’s sense of wonder is never far off. Penn Kemp plays with how the poem can come to us as reluctant visitation. In “Cogito Ergo Sum,”  Kemp jokes:

This is the poem and I
take no hand in it. I
want to write a comedy.

That’s rich. That’s fun
ny laughs the voice in
my head that keeps
right on talking the poem
down the tree and onto

In “Paraclete down the Street” a “sudden poem lights/on (her) shoulder, a tameable parakeet…”. Kemp is a jazz poet who often riffs on her subject with internal rhyme and alliteration.  Reading this collection has made me want to pun! Even when she protests how computers distance us from poetry Penn Kemp is a-mused. In “Mind the Game.” she  pauses and reflects:

We are beyond the mouse.

My Spell Checker would change Cogito to Caught.
For someone’s  Suggest salmon’s.

In the poignant poem “Struck by Stroke” the poet shows her emotional range. The narrator is gentle on the topic of love and ageing:

Those who give the brain a rest recover
quicker…His mind is air-brushed
to a whiter, more spacious landscape
reflected in such snowy waste outside.

So we sink into sweet reverie fireside,
unthinking, unburdened…

In “For the Trip,” the narrator offers her ageing mother, who is searching for a butterfly a, “beaded purse with its butterfly motif as substitute/more lasting than real…”. As a lover of birds and wilderness I especially appreciate Kemp’s poems penned in praise of nature. They are as ominous as they are playful about the consequences of the Anthropocene. In “Bass on the Grass” the narrator warns:

We have been fluid mercury
in a mess of water weed
swimming cross-current.

We know to elude the net, a web’s small intricacy.

We scry so little, under water or on this
unnatural resting place where up and down
dissolves. Long lines no longer connect us.

In “Grazing the Face of Climate Change,” birds migrate–

Icarus is evoked  in the same poem as warning about global warming:

Bright implausible wings dim
before a brighter sun, too close.

Free to fail only
once and then no
longer. He arrives

dead last. Death lasts
for
ever.

No longer
boy but
myth.”

In Barbaric Cultural Practice Penn Kemp challenges us to reflect the way only she can. Trudeau may be at the helm, but Canada’s own Trump, henchmen and women are waiting in the wings. This collection remains relevant. In the final poem of the book, “Ongoing Cultural Practice,” Kemp advises those of us who love humanity and the natural world to “Bear down hard./The time is come.”

One thought on “REVIEW: BARBARIC CULTURAL PRACTICE | BY PENN KEMP”