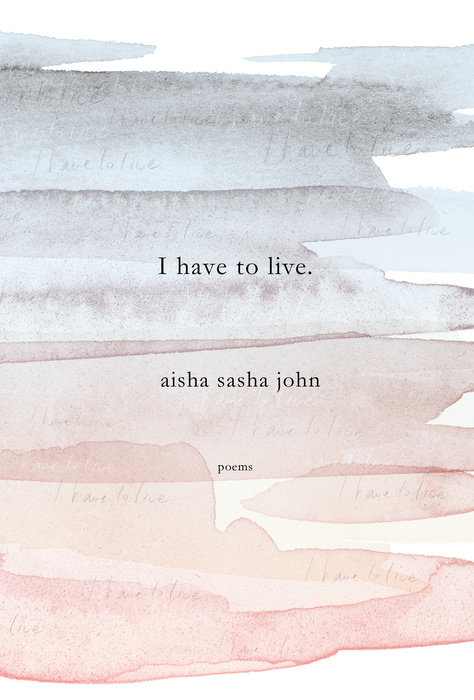 Aisha Sasha’s John’s third full-length book of poems begins at the beginning, as it were, with a salutation:

The first knowledge is of our ignorance.

What follows is a lean-lined phenomenology, or daybook of sensuous experience. “There’s stuff inside of things,” John writes, tracing concentric interiors and their contents, including insects in cocoons, food in refrigerators, writers in cities, eyes in nipples. (12) But these poems are exercises in movement and habitation, such that one does not simply move from one nesting interior to the other. Any affirmation of one’s bearings doubles as a negation:

The world as written here is edible and enviable both, an horizon to strive towards and a cocoon to nibble through. The auto-eroticism of these poems is based in subjective necessity — “I have to live” is both title and frequent refrain — but the pleasure sought thereby is not merely self-directed. Any boundaried being is by definition both inclusive and discerning, and John’s is a capacious poetic: “because I/Like everything,” she writes, which endorsement reads both as a zen-like embrace of actuality, but as a possible simile; the ‘I’ akin to that which it regards. (17) A poem called ‘He thinks I should be glad because they’ continues:

On a certain level, this treats of the anxious difference between being and being seen. But the opening line taken by itself appears ominously correct, too: the idea of Aisha is not Aisha, and it is in likeness to this dissemblance that one is as oneself. At this minimal distance, the most intimate experiences may be observed wryly and with incredulity. From ‘I was born a baby’:

I didn’t have any teeth.

Due to the fact of

Adorably profound, the unassuming nursery-rhyme simplicity of this near-couplet formally amplifies its devotional purposes. Mother, a “favourite lady,” attends the birth in adoration though it is in- and through- and for- her, too. Air is upsetting as upset is everywhere, like air. The mother of the poem, of the poet, is as omnipresent and ambivalent. Years later, John writes, “she buys me high-tops.” The poem “allegorizes” footwear, occasioning a kind of supportive biofeedback, as loving support from the ground:

At first they too felt the full ankle support

In loving tribute to another, the book leaves off somewhat gnomically where it began, at the absolute beginning of one’s provisional being:

Righteous and ruminative, philosophically deft as they are lyrically assured, Aisha Sasha John’s suites comprise a real statement of poetry not as a formal means but as a lifeform, and correspondingly, of life as a poem, scarcely to be contained.