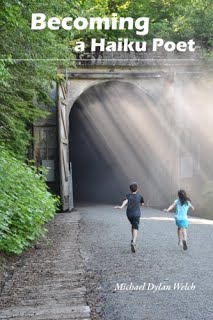 On the first page of Becoming a Haiku Poet, author Michael Dylan Welch states, “While too much information can also impede the poetic impulse, with haiku, as with other genres of poetry, it’s worthwhile to move beyond superficialities…”. This book does that.

In this slim volume, Welch covers many topics including the use of objective imagery, implication & suggestion, as well as defining some Japanese terms (kire, kigo). All of this helps introduce the reader to a deeper & clearer understanding of haiku. Welch tackles the sometimes contentious issue of syllable-counting, & he is definitive – haiku is a genre of poetry, not a form.

There is a useful resources list at the back of the book, as well as suggestions for next steps, & a ‘Haiku Checklist’ for those just starting out on the path of the haiku poet. Importantly, Welch encourages reading as well as writing.

The excellent examples of haiku included in the book – both his own & by other well-known poets – are left to be examined by the reader without any specific exposition. Welch sets the reader on the path in this way – allowing them to begin exploring & understanding haiku on their own terms, & from their own perspective.

His conclusion, however, is more of a rant – he is stridently critical of ‘pseudo-haiku’ & “…the popular misperception of haiku merely as a 5-7-5 poem…”. It might have been better to emphasize to new writers the importance of TRUST – to trust that their readers will make the leap necessary to understand their haiku, & also to trust that by continuing to read & write they will become better haiku poets over time.

This is a guide for beginners, but it may seem that Welch sometimes forgets it. For example, he encourages people, as a next step, to teach haiku, or to form a local haiku group. This is a stretch, but it is possible – & I should know – I’ve done it!

This review by kjmunro appeared first in the Haiku Canada Review Vol. 10 No. 2, October 2016