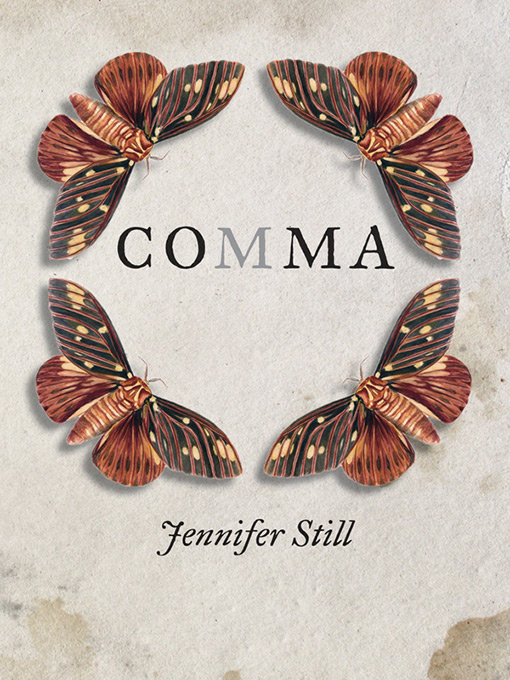 Jennifer Still’s latest is a tender document of writing-through: through a traumatic family episode, and through the text of another, foregrounding the bodily saliency of each. In the meticulous title sequence, ‘comma’ denoting both a lived and written interval, Jennifer Still lovingly commemorates the time of her brother’s coma with the patience of a scrapbooker and archivist. Coming across a copy of his handwritten field guide of prairie grasses, Still begins to read for company, and then commences to write as accompaniment, “for motion, life, the raw breath of my brother’s long dream,” she explains:

In this field, the vast page between my brother’s silence and my vigil ear, a voice balanced on a tuft of grass; a seedpod dragged up a whole field behind it’ silique drifted into soliloquy.

In a poetic essay, strikingly situated at a halfway point rather than as an introduction or endnotes, Still alludes to the erasure poems of Mary Ruefle: “I pick my words as if they were flowers,” Still quotes, and the poems preceding are precisely such a serendipitous bouquet. “The scrap poem is about impermanence,” Still elaborates, and the botanical referent of this overwriting furnishes us an emblem of creative decomposition. Letter-forms are analogized to pistils, petals, stamens: shapely artefacts preceding a poet’s purposes, poetic in themselves. Resemblances are suggestive, and the minimal gap between one glyph and the next is the site of so many generative, generous gaffes: this poet’s optic is both innocent and fascinated, in a manner reminiscent of bpNichol’s alphabetic obsessions: “When I read vitals all I see are vials with a cross inside.”

Many of my favourite pages of this collection are in the third section, ‘SWARM,’ collecting undersized facsimiles of Still’s collage works on looseleaf paper. Sentences are glued onto the page (“The poem is self-adhesive,” Still writes elsewhere) in visual allusion to the regurgitative work of nesting birds and insects, symbols of domicility analogized by visual proximity to the anatomical heart and its chambers. Still employs needle and thread throughout these tactile poems, her line literally passing through the page, as in the poem photographed below, where a bolt of red intersects the script of a murmured benediction, ‘LIVE,’ as an IV threads a vein. 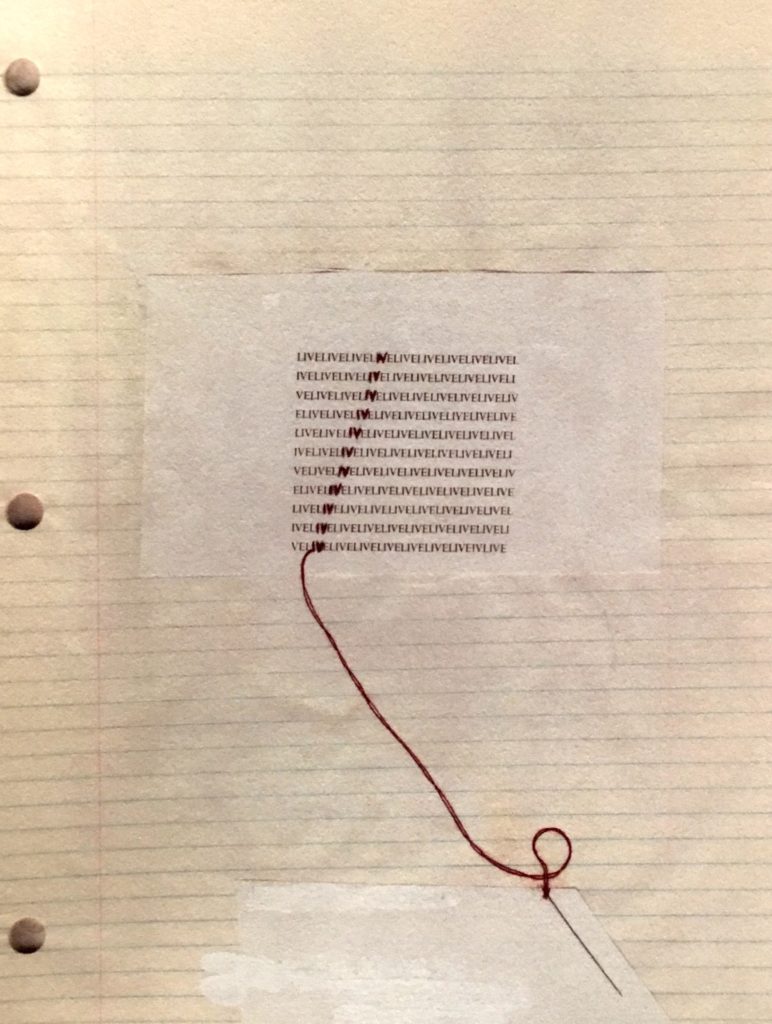 The materiality of these poems is foregrounded in several nesting registers: the ink on the page of the book is a named presence (“the last hue to print/when the toner runs dry”) and the paper gapes behind. The spatial arrangement of the poems in the final section, perhaps preserving the chance placement of the excavated words, calls to mind a divinatory means. In this poetic, words are discoveries as much as decisions, such as the slant rhyme (‘sheds/seed,’ ‘black/fleck/cheek’) cutting across the poem ‘HAREBELL’:

The poem-constellation is abstracted to visual noise on the facing and final page, an asterism preserving only penmarks; only what is a pause amid prevailing silence? The poem seems to allude to a subpersonal punctuation, impatient markings on the page denoting time spent. The granular silence of the poem crackles on the page, like a cloud of gnats, recalling lines from the poem ‘BALD-FACED’: “Emptiness, you have far more body than I imagined. What is breath but the parceled, celled interiors. The thin-coiled rheostatics of swarm?” 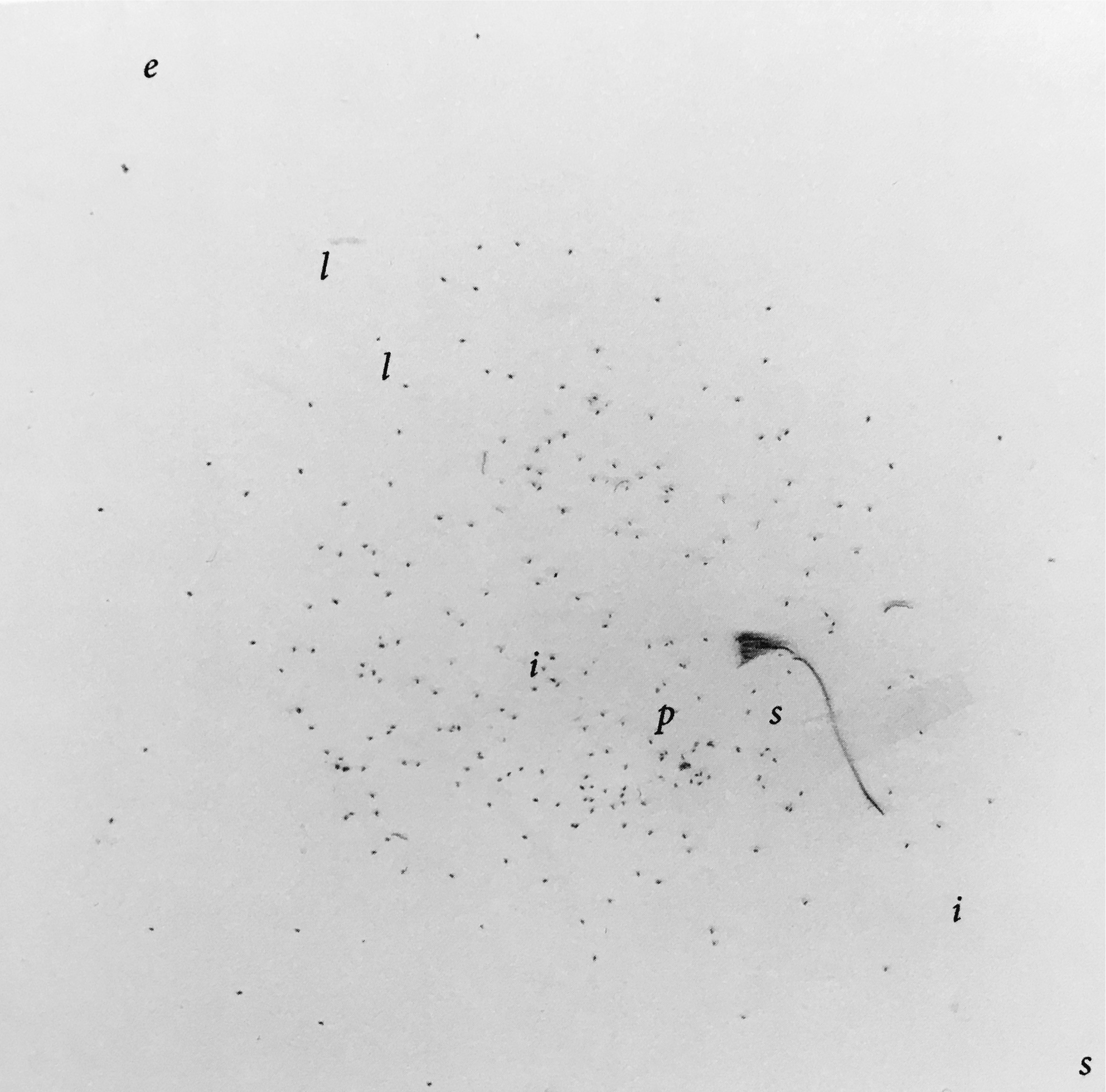 To end then on a pencilled swarm, or spittle of a living breath, with an ellipsis, is to affirm the basis of poetic thought in the inarticulate that is supposedly its limit; in those signs of life exceeding scripture, in the pause promising more; in the miniature event, a spark.