Submissions for our second annual national broadsheet contest close on December 1, 2017, and we were thrilled to have a chance to chat with our first winner, Doyali Islam, who will also be judging this year’s contest. You can read a delightful little interview on the Town Crier with Doyali about her winning poem “cat and door,” and read the poem here! 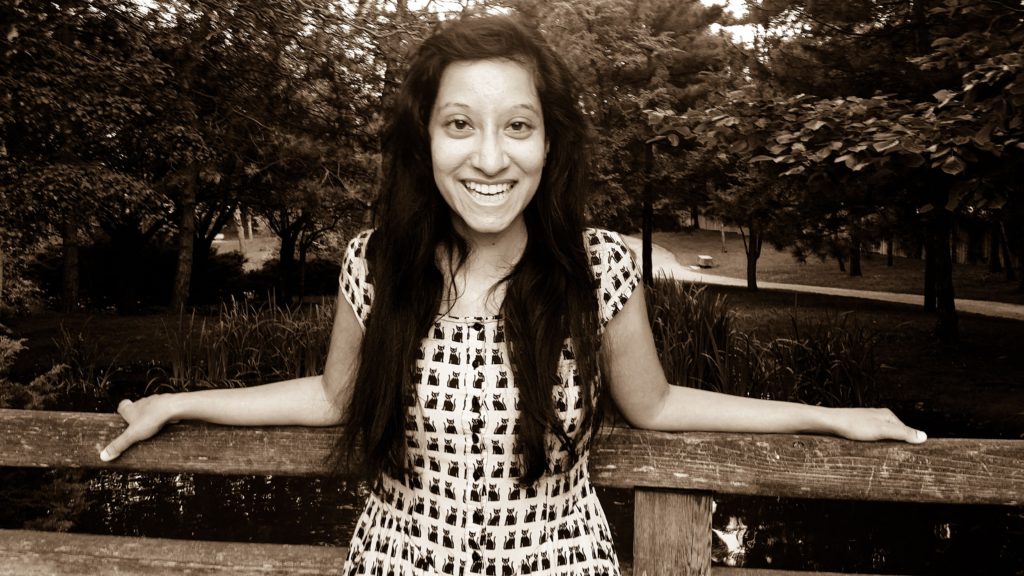 League of Canadian Poets: First, what made you submit to the broadsheet contest last year?

Doyali Islam: Often poets become caught up in thinking about poems as part of a larger/longer work – a full manuscript – but I value the poem as poem. As a single entity, all of its facets must shine, and every mark on the page matters. The broadsheet contest was an opportunity to return to these basics. The fact that the winning poem would be enlarged and set on artisan paper meant that entering the contest was a chance to be ‘hyperaware’ of my work. Also, I just really love broadsheets, because design is important to me – and Briar Craig handled the printing beautifully! (Thanks, Briar!)

You can read more about Briar’s attention to crafting the broadsheet here.

LCP: I love that — especially because “cat and door” feels so distinctly separate from what I’ve read/heard you read from your larger works. You’ve had a whirlwind of successes since winning: an interview on CBC, a new position at Arc, and—I hear—a lot of interest in your manuscript. What’s it been like, behind the scenes, since we first made the announcement in March?

DI: Structurally and formally, “cat and door” is consistent with the other poems in my full-length manuscript, but it is one of the lightest in terms of subject matter – even when taking into consideration its philosophical and metadiscursive elements.

I’ve been working on the manuscript since 2010, and this ‘slow work’ approach has been rewarding – both intrinsically, in terms of risk-taking, honing my craft, and reinvigorating my poetics, and extrinsically, in terms of public and industry reception. (I wrote “cat and door” in 2014 and revised it in crucial ways before entering the contest!)

Of the five presses to show interest in the manuscript, three queried soon after the CBC Radio Sunday Edition interview. I was surprised and grateful for the interest, although I had to tell them that the manuscript was under consideration elsewhere. I do wonder what the post-radio interest means, in terms of what – and whose – writing is perceived as ‘valuable’ and what – and who – is deemed ‘inconsequential’. At the same time, I am appreciative of the Sunday Edition opportunity: complete strangers were given access to my thoughts on poetry! The radio conversation aired on Easter Sunday, and LCP’s Lesley Fletcher let me know that, over the holiday, about 15 people expressed enthusiasm for the interview – many of whom are outside the ‘literary’ community and who happened to be listening to CBC. Lesley’s note gave me hope that poetry can actually find its way into a stranger’s ear.

The poetry editorship at Arc (July 2017 onward) has been fantastic. Arc wanted me on board – literally! – because of my approach to community-building. However, the fact that my poem, “site,” won their 2016 Poem of the Year Contest and the fact that “cat and door” won the 2017 (inaugural) LCP National Broadsheet Contest couldn’t have hurt.

Behind the scenes? …My ‘cat dress’ has increasingly become something of a uniform. I now have five copies. (Move over, Barack Obama, Mark Zuckerberg, and Matilda Kahl!)

LCP: I love that idea of “slow work” – persistence paying off not just in how you’re being recognized, but also in your personal development as a poet.

DI: I am 33. Sylvia Legris was a mentor figure to me when I was 25, just turning 26, in autumn 2010. We conversed over the telephone. What I keep returning to now is the fact that she said, “The work comes first” – not the desire to win a prize, or even the thought of publication. It’s ironic, because you and I are having this conversation because of a contest. It’s ironic, because Sylvia won the 2006 Griffin, and I myself have been extremely fortunate with contests/prizes awarded by blind juries and blind guest-judges. But I have noticed something again and again in conversing with poets and reading their interviews: masterful works – for instance, Soraya Peerbaye’s Tell: poems for a girlhood and Shane Book’s Congotronic – take time. Hm. Perhaps all this to say, if you’re not ready to submit to this year’s National Broadsheet Contest, start working now and aim to submit next year! For some people, deadlines help to actually create work.

LCP: The prize also included membership with the League – and we’ve loved having you as a member. How has your first year of membership been so far?

DI: My first year has been lovely! The League has been super supportive! My advice to the yet-to-be-determined winner: spend time familiarizing yourself with the League’s first-year-of-membership benefits, so that you can leverage it. To be honest, I don’t think I used my first year of membership fully – missing out on the reading opportunities for new members. It pains me, but I try not to be hard on myself, because I have chronic health issues and often need to stay home for self-care. (Both my roles as Arc Poetry Editor and as the new TWUC Write Editor allow me to work mainly from home.) But my favourite thing about membership so far has been the League’s newsletter – ST@NZA – which goes out electronically to all members and includes great submission opportunities.

LCP: As the guest judge this year, what are you looking for in the winning poem?

DI: Everything I demand of my own work! I seek a poem that makes me long to return to it again and again, and that yields ‘more’ with every pass. A poem that knows it needs to take its place in this world, especially if it offers up more questions than answers. I want to feel, in my body, the care of the writer’s hands – every fibre of my being commanded to attention, to listening. Something handled deftly and wrought finely. Something urgent and precious as water.

LCP: And finally: what’s going on with you right now, writing-wise?

DI: I’m writing more and more in my journal: the hand returning to the paper page. Social media serves several valuable functions, which I won’t address here, but a lot of people seem to be using it to keep records – like, “Oh I ate a sandwich;” “Oh I might get lucky tonight;” “Oh I’m running from here to there, and my life is so busy.” I don’t know how this kind of public announcement functions or who it serves, and I don’t want to consume it. And I find for myself that, now that I have access to social-media platforms, my impulse is to share publicly – and immediately – what I would have once reserved. I want to protect certain aspects of myself. I refuse to let spirit and memory be up for offer. So I am writing by hand, because certain things need to stay quiet and intimate and close – until they become urgent enough to turn into poetry.

Doyali Islam’s poems have won Arc’s Poem of the Year Contest, CV2’s Young Buck Prize for writers under 35, and League of Canadian Poets’ inaugural National Broadsheet Contest. In 2017, she was a National Magazine Award finalist for poetry. Her poems can be found in The Fiddlehead and Kenyon Review Online. Interviews can be found online through The Poetry Extension, Project 40 Collective, Town Crier, IFOA, and CBC Radio’s The Sunday Edition. Doyali is the poetry editor of Arc and the new editor of The Writers’ Union of Canada’s Write magazine. She lives in Toronto. www.doyalifarahislam.com + @doyali_is