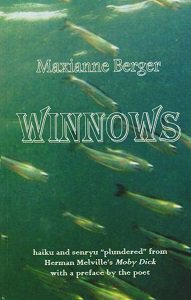 To winnow is to separate the wheat from the chaff, & in Winnows we find a series of erasure poems mined from Melville’s Moby Dick. These poems come from the novel, but do not tell the same story.

If I didn’t know these words were taken from another source, I never would have guessed.

In the preface, Berger describes the composition technique she uses as ‘unhaikulike’ – I envision something like a word puzzle fanatic in a meditative state, scrolling through the letters until – aha! – the ‘answer’ appears…

Berger’s reflections on her project are worth reading for anyone who, like her, delights in the joys & surprises of the English language itself.

She also painstakingly explains the incidents of “cheating”, including a particularly brief chapter that led to a different sort of letter collection. Would anyone have noticed? Not me – I was too busy enjoying the poetry!

This review by kjmunro appeared first in the Haiku Canada Review Vol. 11 No. 1, February 2017