On Saturday, June 16, 2018 at our annual awards ceremony in Toronto – this year held as part of the Canadian Writers’ Summit at the Harbourfront Centre – we were thrilled to honour the winners of six League of Canadian Poets awards: three book awards, one spoken word award, and two membership awards. League member, spoken word poet, and community workshop facilitator Tanya Neumeyer hosted the lively ceremony -making us laugh, uplifting poets for the tireless work and countless hours they invest in their writing, and always making us smile.

The winner of our Gerald Lampert Memorial Award was Emily Nilsen, for Otolith, published by Goose Lane Editions! Emily came all the way from Nelson, BC to accept the award and read a poem for her captivated audience. The jury – including Laura McRae, who was there to present the award – says Nilsen “thrives in the impossible” with Otolith:

Emily Nilsen questions how we name, categorize, and ultimately come to agree on the existence of the world and our relationship to it; she thrives in the impossible. Her poetry approaches the natural world in a post-language state where “every sound from our mouths” takes “the shape of a different sorrow.” Alternately obscuring and bringing into focus perception and self-perception, Nilsen gives us a compelling collection that coalesces the protean, the liminal, and the mutable, and serves as a guide for a sacred equilibrium with the ecological through its invocation of temporal and corporeal uncertainties and discomforts.

You can read “In Order to Say it Exists We Must” from Otolith here and purchase the book here.

This year’s Pat Lowther Memorial Award winner was Lesley Belleau for her book Indianland, published by ARP Books! Lesley took a break from her studies in Peterborough to join us for the ceremony. Jury member Cheryl Antao-Xavier was there to present the award, and to advocate for the importance of Indigenous literature in Canada:

The howl of Indianland is a haunting echo, raising the unease at a longstanding injustice impossible to make right. These poems present a passion that goes beyond words, a deep-seated denude that expresses a powerful range of emotions. This is a truly moving and outstanding collection and a work that will prove its lasting value to Canadian literature for years to come.

You can read “Milkweed” from Indianland here and purchase the book here. 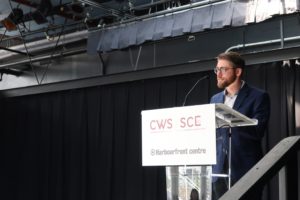 Our 2018 Raymond Souster Award  winner was Karen Enns for her book Cloud Physics, published by University of Regina Press! Can was unable to join us at the ceremony and thus, there to accept the award on Karen’s behalf was juror Jimmy McInnes. Of Cloud Physics, the jury says

it gives the feeling of being in the presence of a kind of sacred, fictional universe. There is a stark landscape in the collection, with an imploring wisdom at its heart, exploring the choral nature of the human heart and stranding the reader in a communal voice.

You can read “White Flag” from Cloud Physics here and purchase the book here.

Our Sheri-D Wilson Golden Beret Award for spoken word winner this year was Dwayne Morgan! Unfortunately, Dwayne couldn’t make it to the ceremony as it took place at the same time as his daughter’s annual father-daughter dance class, though Tanya – a fellow spoken word poet – encouraged us all to attend one of Dwayne’s performances and spoke about his integral part in the spoken word community:

Dubbed by his peers as “The Godfather of Spoken Word,” Dwayne Morgan has been a spoken word community-builder for years. He tours schools and communities extensively, and with support from the York Region District School Board, he created Ontario’s first school poetry slam league! In 2016, Dwayne was a finalist for the Premier’s Award for Excellence in the Arts, and he was also the recipient of the African Canadian Achievement Award. For his extensive community work and achievements, Morgan was also inducted into the Scarborough Walk of Fame.

You can watch performances by Dwayne on his YouTube channel, here.

We were delighted to announce that Marilyn Dumont will now be a member of the League for life! Marilyn has been a member of the League since 1996, and during her career as a poet she has won the Gerald Lampert Memorial Award, the Stephan G. Stephansson Award, the McNally Robinson Aboriginal Poetry Award, and Aboriginal Book of the Year. She is the author of four books of poetry, the latest of which – The Pemmican Eaters – was shortlisted for the Raymond Souster Award. In addition to writing award-winning books, Marilyn Dumont has also been writer-in-residence at libraries and universities across Canada, and faculty at the Banff Centre. Marilyn was also the lecturer for the League’s 2017 Anne Szumigalski lecture, where she presented a beautiful and powerful lecture about the recent history and influence of Indigenous women poets in Canada. “The writing of Indigenous women writers has sustained me through difficult early years,” she wrote in her lecture—“Indigenous women writers have helped me heal the colonial wound with their stories.” The League is honoured to have Marilyn Dumont as a member, a writer who has seamlessly joined the ranks of the women who so inspired her, and is proud to celebrate her this year with the life membership award.

You can find our 2018 poetry award shortlists here.

Congratulations to the 2018 League Award winners, and thank you to Tanya Neumeyer for hosting a wonderful celebration!