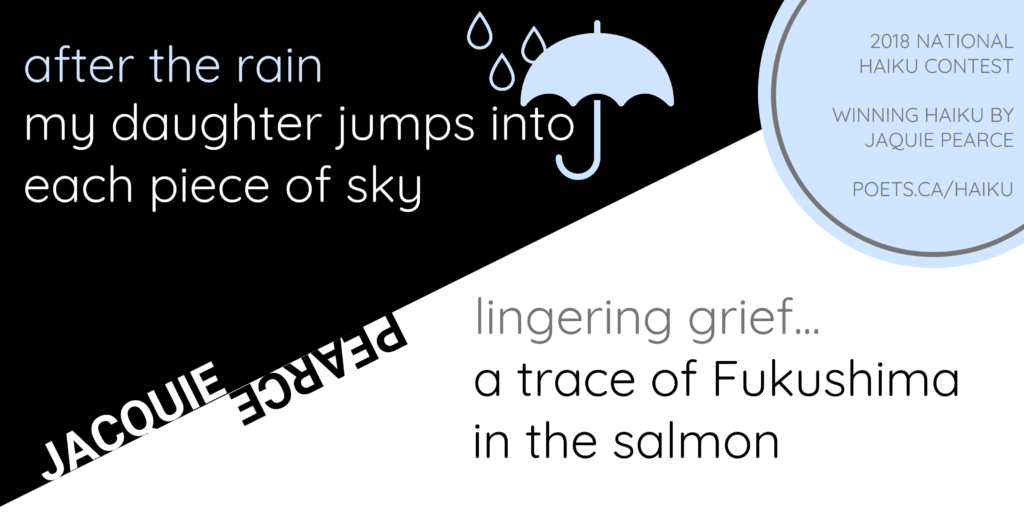 Without further ado, we are thrilled to present you with Jacquie Pearce’s two winning poems, as well as a few honorable mentions selected by our generous jurors:

“[This] is a haiku that beautifully combines the ‘small picture’ (the jumping daughter) and the ‘cosmic picture’ (the sky reflected in the puddles, which ends up in pieces because of the disturbance of the water),” says juror Terry Ann Carter. “The puddle is never actually mentioned, but we understand this, through the first line. There is a joyful hopefulness emanating from this haiku; a child who is allowed to express herself by jumping in puddles, will one day solve some of the world’s problems. An intimacy between a mother who is observing and a daughter who is playing.”

The poet herself also shares the beauitful moments that inspired her to create this winning haiku:

“When my daughter was little, she loved rain and puddles. One day, when she was in kindergarten or grade one, it was pouring rain while I walked to the school to pick her up. The whole way there, I complained to myself, thinking what a lousy, wet day it was. Then, my daughter stepped out of the school and exclaimed with huge delight, ‘It’s raining!’ She felt such joy in response to the rain, that it turned my own thinking on its head, and helped me to see the world with a renewed sense of wonder. That’s what haiku does as well. Approaching life with a ‘haiku mind’ helps me notice little things around me and see ordinary moments with a sense of newness and significance.”

Juror Terry Ann Carter praised this poem for how it “expresses a contemporary sadness by pointing to the continuing pollution damage from the fall out of the recent Fukishima nuclear accident. It is a global concern. Haiku are usually not known for their ‘messages’ but this poem is simply (and profoundly) stating a truth; an understanding in the moment, that deeply affects us all. Michael Dylan Welch, respected haiku poet, scholar and activist, speaks of the continuing moment, which is  applied here with the use of ellipsis. Darkly poignant. Of our time.“

Naomi Beth Wakan also weighed in on their final two selections: “It was hard to choose between the two winning haiku because they were both so excellent in their own way. The one describing the child jumping in puddles, and the mother so simply describing the sky reflected in the puddles was such a joyful one reflecting the promise of youth. Yet the one reminding us that in all our actions, even that of eating a piece of salmon, are moral and political issues that must be considered, presented a bitter truth. So bitter and sweet, I felt, were both necessary to be present in my choice. Each haiku presented a ‘naked’ image which gave rise to so many ideas and feelings, and that, I feel, is the essence of good haiku writing.” 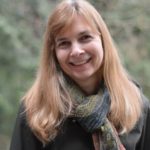 By Marianne Paul | Marianne Paul’s haiku have appeared in various publications, including (among others) the Literary Review of Canada. She has won the Vancouver Cherry Blossom Festival haiku invitational contest (Canada division) and the Jane Reichhold Memorial Haiga Competition (mixed media category). She is the author of the novel Tending Memory and the poetry collection Above and Below the Waterline, published by BookLand Press. Marianne is a member of Haiku Canada.

the world I once knew

By Beth Skala | Beth Skala is a founding member of the writers’ group Pens Ultimate Nanaimo. She is also a member of the Federation of BC Writers and Haiku Canada. Her poetry has been published in anthologies across Canada, and she has self-published two chapbooks on the poetry of ageing:  Not For Sissies and Puttin’ on the Glam.  Her memoir unSUPERvised: growing up in the 1950s is a collection of haibun (prose plus haiku). Beth is the only haiku poet to have won Best BC Haiku three times in the annual Vancouver Cherry Blossom Festival Haiku Invitational (2011, 2016, 2017).