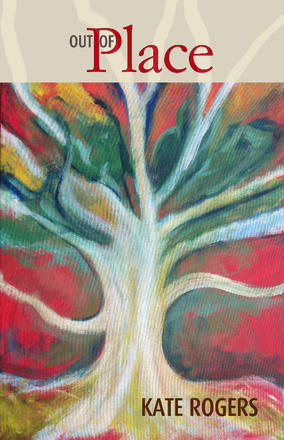 “How I Was Invented”: Belonging and (Dis)placement in Kate Rogers’ Out of Place

Place is a difficult subject to write about. With more obscure or esoteric subjects, poets can maintain a safe emotional distance, thereby avoiding the vulnerability that is both prerequisite to and the by-product of writing about our most intimate experiences. Writing about place demands a reckoning with the familiar, the examination of one’s own identity, and this forces us to confront our ghosts and demons, see ourselves reflected in convex mirrors. The objects we perceive through the lens of our experiences are both closer and farther than they appear.  Place is so embedded in our sense of self, it becomes intrinsic to the lens through which we perceive the world. All too often, we ignore or underestimate its influence in our day-to-day lives and how, conversely, the feeling of being mis-placed, or out of sync with our environments can impact generations.

Kate Rogers’ second full-length collection of poetry, Out of Place (Aelous House, 2017), tackles this subject with verve and acuity. In this largely autobiographical collection, the poet excavates her past and present to create a collage of memories that feels charged with the weight of loss and displacement. For Rogers, the physical spaces and the landscapes we inhabit, whether through birth or migration, are never separate from the dreams, language, stories and myths in which they are formed. The collection spans a period of over a hundred years, tracing the poet’s lineage from her Ukrainian maternal great-great-grandfather’s immigration to Canada in 1911 up until present-day. Geographically, the collection takes us from the frozen prairies of Canada to mainland China and Hong Kong, where Rogers lives and teaches English. The difficulties inherent in migration, and the outsider status it confers, also come alive in poet and painter Clara Blackwood’s dream-like, Expressionist cover painting, in which a tree’s roots extend deep into the earth, while simultaneously reaching upwards and outwards, seeking contact and connection outside of itself. In the same way, the poems in Out of Place explore the simultaneous desire for the known and unknown, for the comforts of home, juxtaposed with the desire for acceptance and belonging in unfamiliar territory.

Rogers sets the tone for the collection with the opening epigraph from the Palestinian-American author and critic Edward Said, no stranger himself to displacement: “All families invent their parents and children, give each of them a story, a character, fate, even a language. There was always something wrong with how I was invented.” In the same vein, Out of Place asks us to consider the ways in which we become products of physical/emotional displacement, how histories—local, cultural, personal, familial—broaden and complicate an individual’s sense of self.

In each of the collection’s four parts, “Out of Place,” “City of Change,” “Kateryna’s Children,” and “The Moment,” Rogers examines the unexpected rewards and challenges that accompany defining oneself either in relation to place, or in opposition to it. These challenges are present from the onset with the collection’s opening poem, “Prayer: for Joni Mitchell.” The poem’s short lines and uneven stanzas (“Today I want only night/don’t thank love/for its candle/casting shadows”) are particularly effective in mirroring the figurative descent of the speaker (“I need the well/in your song/for the dark cover/it pulls over my head”), as she prays for the recovery of the iconic Canadian singer, lying in coma at the time of the poem’s writing. The speaker braids Mitchell’s past in with her own, and her grandmother’s, a cathartic embrace of longing and desire, tied in with the gravity of time’s passing. In a stunning reversal near the end of the poem, the speaker stands above the metaphorical well, imploring “Please climb out, beautiful hermit./Ladders are waiting.”

In “Cataracts,” the most vivid and richly textured of the four poems that make up this first section of the book, Rogers weaves two seemingly disparate narratives together: the speaker’s encounter with the “old lady/sitting in the doorway/of her corrugated metal/hut,” and her mother’s cataract surgery. As Rogers allows her lines to lengthen, adding more significant detail and sensory imagery, her language gains momentum, becomes more visceral, and delivers a more powerful punch:

She will not flinch at the scalpel’s

glint as it peels back the blur

on the operating table,

will return to her trees.

In the second part of the collection, “City of Change,” we travel with the speaker to Hong Kong, and through her eyes, experience the unexpected beauty, complexity, and myriad of contradictions present in this tumultuous environment. In the title poem of the section, Rogers juxtaposes images to highlight these contradictions, as nature (“Where I’ve learned / to live with dangerous snakes – / bamboo vipers that drape / the trunks of trees”) collides with culture (“the maw/ of the Cross-Harbour Tunnel/ Hung Hom – choked / with cars, double-decker buses / recirculating exhaust fumes / for passengers who do not smoke.”). The poems in “City Change” blur the lines between personal and political as they explore the speaker’s initial fascination and growing disenchantment with Hong Kong, in response to the social and political injustice around her. This combination of emotions is particularly present in “Why I No Longer Read Dystopian Fiction”: “Too much like scanning the news,/or having my palm read by a stranger/who wants to sell me a fork in the road.”

In “The Borrowed Children,” the speaker describes her grief as “asleep” until her own students’ involvement in protests and confrontations with brutal police makes it impossible for her to remain in stasis or denial. These events jolt the speaker into awareness, not only of the turmoil of the external world, but of the speaker’s internal world as well, as grief for her struggling students gives way to long-buried grief for her own “lost children.” The repetition of “My grief was asleep” creates an incantation-like rhythm that underscores the seriousness of this awakening. However, despite the emotional intensity and devastating stories told in “City of Change,” the poems in this section lose some of the lyricism and poetic diction otherwise so prevalent in the collection, reading at times more as prose poems or memoir, broken into short lines. While this form feels appropriate in the earlier poems in the collection, which guide the reader downwards into the vertical realm of memory and darkness, it feels at odds here with the otherwise expansive, diary-like, meditative tone of the poems.

In the third section of the collection, “Kateryna’s Children,” Rogers’ voice ventures confidently again in the direction of the poetic, away from conventional prose syntax, as the poet explores the immigrant/newcomer experience through the lens of her Ukrainian-Canadian family history. These poems are among the strongest and most sumptuous in the collection, richly saturated with sensory detail that bring her maternal ancestors to life. The unforgiving rural landscapes of these poems set an appropriate stage for the abuse, both physical and emotional, that the women in them endure. In “Great-great-grandfather Gawdun – 1911,” Rogers engages her reader with greater nuance, depth, and subtlety, as the lines blend the natural world and female body in a depiction of domestic violence:

your fist marked a pattern on her temple –

blood under the skin. Her name was buried without a stone.

Rogers adds layers of texture through the use of Ukrainian phrases interspersed with English: “Molly, with her Anglick name…huddling by the stove /in the malha kata / of her grandparents’ house.” The English language recurs as a theme uniting earlier sections of the collection and this one, in which the ability to speak it both fluently and with native-speaker pronunciation plays a critical role in one’s acceptance and belonging to a place. Distancing oneself from one’s mother tongue, one’s heritage, and one’s natural rhythms of speech, though, are the price paid for assimilation, best encapsulated in “Diphthongs”: “Mother tore out her first tongue,/ learned to double her vowels, crisp/hard consonants.” Later in the poem, the speaker “step[s] away from the lectern” and returns to her “mute Matryoshka,” (traditional Russian nesting dolls), “Mothers/inside mothers.” The speaker in “Diphthongs” identifies most strongly with the smallest of the nesting dolls, ending the poem (and the section) with one of the most poignant, powerful images of truth-seeking and identity in the collection: “Who is she? I touch her face./ The paint has flaked away,/leaving it blank.”

The fourth and final section of the book, “The Moment,” focuses on relationships with fathers, particularly the speaker’s relationship with her own father, and is in turns heart-wrenching, shrewdly critical, and imbued with pathos. With clarity and precision, Rogers paints the portrait of a multi-layered man, linking history and identity with the recurring motif of horses. As the speaker asks in “My Father and Don Quixote,” “Who was my father–/the man on horseback/tilting at giants?” “Hokusai’s Dream,” written in the voice of the 19th century Japanese artist’s daughter, is an ekphrastic poem based on the erotic painting “The Dream of the Fisherman’s Wife.” As with the other persona poems in Out of Place, which might also be considered dramatic monologues, the language in “Hokusai’s Dream” has a lilting musicality. Roger’s alliteration lulls the reader into a lucid dream-like state that echoes the source material’s subject itself, a woman lying in the throes of ecstasy, in an altered state of consciousness:

In your dream the Ama

swims to a summer island

where the youngest diver

strings the shining beads on silk

from moths that fly

only to meet the new moon.

As a whole, Out of Place is a formidable achievement, approaching its subjects with clarity, honesty, courage, and compassion. The collection takes the reader to new heights and depths, providing no easy solution to the problems posed in Edward Said’s epigraph: the ways families “[mis]invent” their parents and children; how places and figures in our lives contribute to our often-times fraught, complex, contradicting selves. Still, even as outsiders, as we experience displacement and separation from our homelands, our languages, and our childhoods, Out of Place assures us there are always moments of connection that offer us hope, redemption, and a sense of belonging.