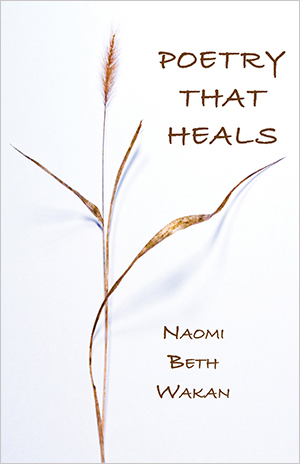 Naomi Wakan’s poetry journey Poetry That Heals begins in her “middle years” with a two year stay in Japan. As she began to translate a Japanese friend’s book of haiku into English (with the help of another Japanese friend who was teaching English to children) her appreciation for the literary form took root. She writes, “from that period on, I was hooked on haiku.”

That hooking has lasted to this day, over thirty years of reading and writing haiku – being involved with Haiku Canada as a Western Canada regional co-ordinator, and later, as a facilitator for bringing haiku poets together on “her” island – Gabriola.

There is no mention of “life force,” or “spiritual,” “inner voice,” or “sacred space” in Poetry That Heals. These words are not part of Wakan’s vocabulary; instead, she explains her “middle way” – her favourite position “on the fence of maybes.” Wakan is not aiming for perfection, or enlightenment, or “any other of those terms of extreme that are far too nebulous and exhausting. Idealism has a high failure rate. I am about empowerment, not defeat.“

Gary Synder writes, “Poetry has an interesting function. It helps people “be” where they are.“ Wakan’s chapter Being Here Now  begins to distill the essence of haiku. What it is. What it isn’t. Drawing on her contact with Buddhism (“in a superficial way,” she writes) Wakan gives her readers a compassionate view of her relationship with the “imperfect,” the “incomplete.” By giving examples of haiku from some of the best practitioners in English speaking North America: Ruth Yarrow, Alice Frampton, Winona Baker, Michael Dylan Welch, Carole MacRury among others, Wakan is “teaching by example.” Poems are followed by detailed explanations concerning juxtaposition of images, line breaks, pauses, silences.

And Wakan spends more time with the classics in her chapter on Wabi-Sabi.

While modern Japan is as vulgar as North America, and even traditional Japan had its areas of grossness, two complex terms personify the best in Japanese aesthetics and Japanese poetry for me. ….Wabi is concerned with the simple, the things of quiet refinement, the internal life. Sabi tends to be more concerned with outward esthetic values such as elegant simplicity, the patina of aging, the irregularity of handcrafted things, the unpretentious, and the ambiguous. Both are concerned with imperfection, impermanence, and incompleteness.

Wakan is not afraid to make herself vulnerable. And we as readers, are also grateful for Wakan’s perseverance, her undeniable ferocity in “getting things done.”

Writing haiku showed me the way, for it confined me to the parameters of purely speaking of the nouns of images. This discipline allowed me to be more focused and not so scattered.

Poetry That Heals is a testimony to Wakan’s own life and to the possibility for others.