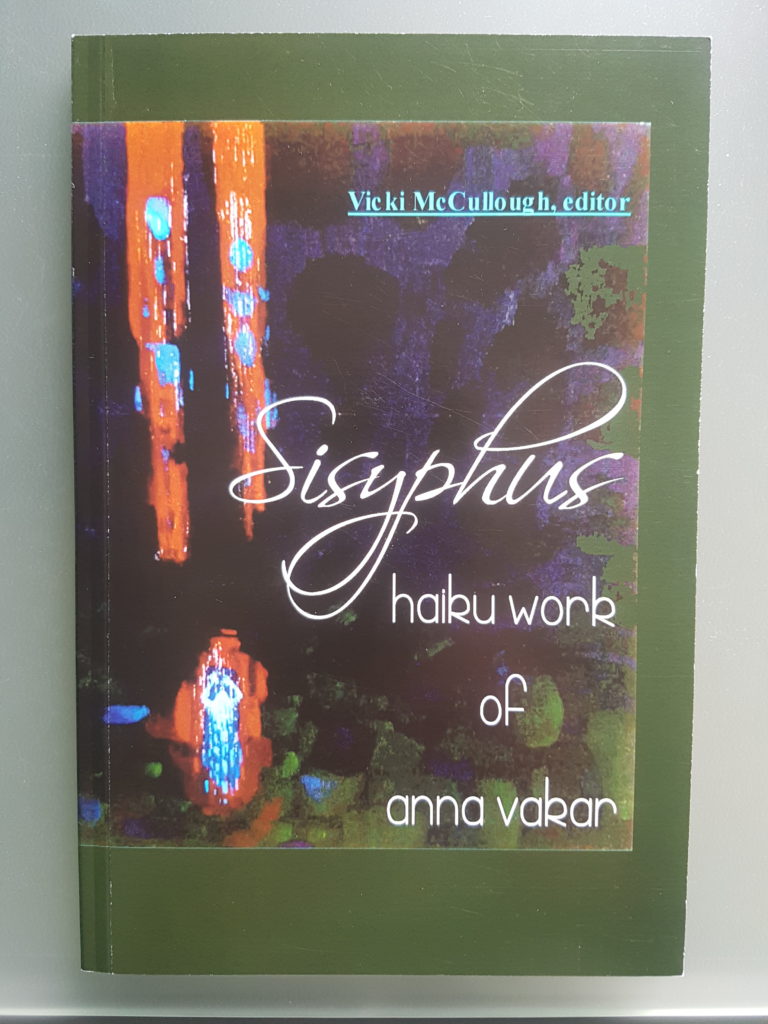 In Greek mythology, Sisyphus is punished for eternity – he must repeatedly push a boulder uphill, where it rolls back down again…

Anna Vakar, & many of us, can relate: “…trying to push my ideas uphill.”

In the Introduction, McCullough clearly distills the major points of Vakar’s commentary regarding the state of haiku at the time, (mainly the 1970’s & 1980’s), from various essays & other writings. Vakar was concerned with not only the definition of ‘haiku’, & its function in Western society, but also actively sharing an awareness of this genre. Vakar promoted the value of haiku in improving writing skills, taught haiku workshops, & facilitated a study group.

With the emphasis on her writing life, McCullough has placed the brief Vakar biography at the end of the book. Perhaps, like me, others will want to learn more about her. Years ago I discovered an article in The New York Times, during a routine google search, which describes the interesting story of Anna & her sister’s childhood escape from France to the USA in 1940 (by Nadine Brozan, 10 December 1990).

It is refreshing & informative to read about a poet & their work – my favourite example is the inclusion of a section entitled ‘Pencil Notes’… here we have a list of the actual comments Vakar has written in the margins of various haiku journals – simply fascinating!

Although not a prolific poet, in McCullough’s words, “…it’s all there.”

Here is a selection of Vakar’s poetry that show both her subtle touch, & her humour:

how come that goose

This important book, along with many others, was launched first at the 40th Anniversary celebration at the 2017 Haiku Canada Weekend in Mississauga, Ontario. It is to McCullough’s credit that she arranged a second launch later, at the Sunnybank Centre in Oliver, BC, for family & friends, & Anna Vakar herself. Sadly, Anna passed away only a few weeks later.

This book truly is a legacy project, as stated on the cover. Here is an overview of the poet’s life, their haiku, & their contributions to the English-language haiku world. How many books are there like this one? About Canadian haiku poets? About a woman?

One is reminded of the recent essays published in Haiku Canada Review by Terry Ann Carter. I can think of several poets whose life & work I would like to see in a similar treatment – is this the beginning of a series that McCullough & Catkin Press envision?