after “My heart lives in my chest” by Dorothy Molloy

He sculpts my words with the chisel of his mouth.
Fits me inside his mind’s binding. I do what I’m told
to get my playpen back, the edge of no to end
each day. What did I do to exit his eyes?
Blue-blinding marbles detached from the brain
that stems them. He won’t answer. Sits
in his fat easy chair. What did I do or what
did I do not but wear something pretty? He spits
his words in blurry circles; hurls stones
of vowels at fields of bruises. Clothes
with round edges give too much of me to see.
“Who you trying to impress? Some fancy man?”
He’s laughing now. “You think I’m serious? Just
want you to be safe, Pet.” Blind heart, pack up and run. 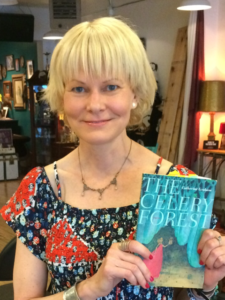 Catherine Graham is a Toronto-based writer. Among her six poetry collections The Celery Forest was shortlisted for the Fred Cogswell Award for Excellence in Poetry, named a CBC Best Book of the Year and appears on their Ultimate Canadian Poetry List. Michael Longley praised it as “a work of great fortitude and invention, full of jewel-like moments and dark gnomic utterance.” Her Red Hair Rises with the Wings of Insects was a finalist for the Raymond Souster Award and CAA Award for Poetry and her debut novel Quarry won an Independent Publisher Book Awards gold medal for fiction, “The Very Best!” Book Awards for Best Fiction and was a finalist for the Fred Kerner Book Award. She received an Excellence in Teaching Award at the University of Toronto School of Continuing Studies and was also winner of the Toronto International Festival of Authors Poetry NOW competition. While living in Northern Ireland, Graham completed an MA in Creative Writing from Lancaster University. Her work has appeared in journals and anthologies around the world and she has appeared on CBC Radio One’s The Next Chapter with Shelagh Rogers. Follow her on Instagram & Twitter at @catgrahampoet.