Toronto knew her as the Peace Lady:
For hours she’d stand athwart an overpass
That spanned the Parkway through the valley Don;
On Steeles, on Finch, on Lawrence, Eglinton.
She wore a white robe, her brown hand held high;
Two fingers telegraphing, simply, Peace.
When driving past we’d roll the windows down
And wave Peace back as Dad tapped on the horn.
At school we traded true Peace Lady facts:
She lived in the ravine, she kept raccoons.

In Nineteen Eighty-Four, cold war scares raged.
In Sunday school, we read When the Wind Blows.
Our seventh-grade science teacher confessed
Where he’d wish to be if the bomb got dropped
On Toronto: “Directly beneath it.”
In English we read Wyndham’s Chrysalids.
On TV, muppets sang “Can’t we be friends?”
Max Headroom unearthed radioactive waste
And several times a day the networks played
Emergency broadcasts, as grey and dark
As Reagan and Chernenko, null and void
As country roads shown in The Day After.

One night the evening news displayed how wide
A circle of fallout would spread in case
An ICBM struck the city’s core.
That circle’s edge — that emptied area code —
Engulfed our neighbourhood. Sleepless that night,
I lay and pictured houses on my street
Intact but vacant, windowless, and still,
All marred with carbon shadows, disused toys.
The air a thick green, toxic algae bloom,
Through which survivors shuffled, half melted,
Like plastic action figures burned by kids.

Through nervous years she graced our roads with peace,
A figurehead of hope on Toronto’s
Concrete prow; but when the millennium turned,
When cold war turned to market war, and we
Put movie studios in our pockets,
She feared they made her mission a new threat.
She was weaponized as mass distraction,
As drivers courted carnage in pursuit
Of perfect shots. So she stood down, gave up
The call for all to bid farewell to arms.

“The ‘state of emergency’ in which we
Live is not the exception but the rule,”
Warned Benjamin, in 1940’s storms.
I want the news to tell us Pauline won,
That she got a Nobel or the Order
Of Canada, or has been canonized.
Made statutory. Cast as stone icon
For all guerrilla artists to raise up
On all the city’s bridges and highways,
A figurehead to help us navigate
To any year but 1984:
A year whose end we’re all waiting for, still
As silhouettes burned to windowless walls.

Note: The poem’s title is a line from Stevie Wonder’s song “Heaven help us all” (Motown, 1970). The Walter Benjamin quotation is from “Theses on the Philosophy of History” (Illuminations, translated by Hannah Arendt, Shocken, 1969).

Copyright © Mark A. McCutcheon. Originally published in Into the Void (December 2017). 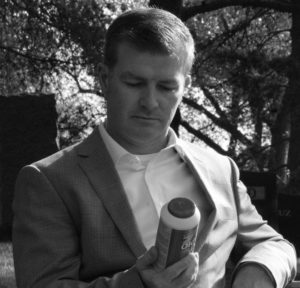 Mark A. McCutcheon teaches English literature at Athabasca University. His poems and short stories have been published in journals like EVENT, Riddle Fence, On Spec, Existere, Carousel, and subTerrain. “Heaven help the roses” first appeared as Runner-Up in Into the Void magazine’s 2017 poetry contest. Mark is the author of The Medium Is the Monster: Canadian Adaptations of Frankenstein and the Discourse of Technology (Athabasca UP, 2018) and his literary criticism also appears in The Explicator, English Studies in Canada, and other scholarly periodicals. Mark is on Twitter at @sonicfiction.