In two recent collections, urban wildlife becomes a context for poets exploring the relationship of human and animal—a relationship that stretches back into myth-making and tale-telling, sideways into contemporary biology, and forward into a future of changing climate and anthropocentric landscapes. Each poet uses a different lens and tools to produce different but complementary books. 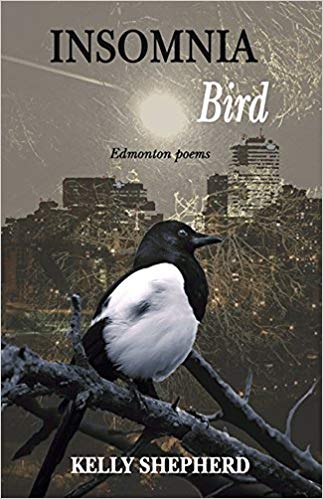 The “insomnia bird” of Kelly Shepherd’s collection is the magpie, the totem animal presiding over his city of Edmonton: northerly, edging the boreal forest, inhabited by magpie and coyote, but also by people making a living from the oilsands, transit riders and construction workers in a city under rapid construction. He cobbles together a fabulous pastiche of text from corporate brochures and websites; allusions to literary works modern and ancient; bafflegab from civic planning documents; and pieties from public consultation documents; all held together with patches of his own illuminating lyricism.

A magpie spreads his wings, lifts off
throws elm trees aside
flings houses and lamp posts left and right
hunches its shoulders, dives
and moves the entire sky.

“Reading (on) the bus, where the Great Plains begin” is one of the poems that exemplifies Shepherd’s magpie approach. The narrative of a bus ride on a dark winter morning—irritable bus driver, passengers getting on and off or breaking into argument, the road traffic and slammed brakes—is interleaved with quotes from the book the poet is reading about Brutalist architecture. The style that formed many of the city’s buildings during its rapid post-war boom becomes a metaphor for the interactions of its people; the bus’s sudden lurches echo economic and environmental ones:

We are starting to slide out of control.
Many of the passengers
are not yet aware of this…

Yet in the morning dark, Shepherd’s poem touches one final grace note, a reminder of the city’s other inhabitants: “Rabbits browse among the constellations.”

Wildlife constantly interrupts and comments on the city. “Coyote comes to town (To Take a Class in Public Participation and Conflict Resolution at the University of Alberta)” is one of the quirky titles. His magpie is not the creature of old tales that collects shiny objects – it is itself the shiny thing, something to be observed, admired, considered. It offers “a charm of picomancy,” a gesture to the future.

Occasionally the pastiche technique gets strained. One beautiful poem pictures a woman who, seen at a distance “on the smoky sidewalk downtown appears / to be wearing a luxurious, if dusty, feather shawl.” This figure becomes a kind of bird spirit, “a pillar of pigeons.” But the title, “A Neotony of Smartphones,” feels like something chosen simply to be smart. It makes some sort of connection in the poet’s mind, but the reader wonders ‘what the heck?’ and feels that the mental energy expended on making any connection has been wasted. Parataxis can be taxing at times, especially after a long day.

Nevertheless, for the most part, Shepherd’s technique works to create a sense of independent streams of existence that must coexist somehow: human and animal; the language of poet and planner; myths and jobs. As a whole, Insomnia Bird, keeps us awake for all the right reasons, including its sly humour and sharp critique of the environment humans are manufacturing. 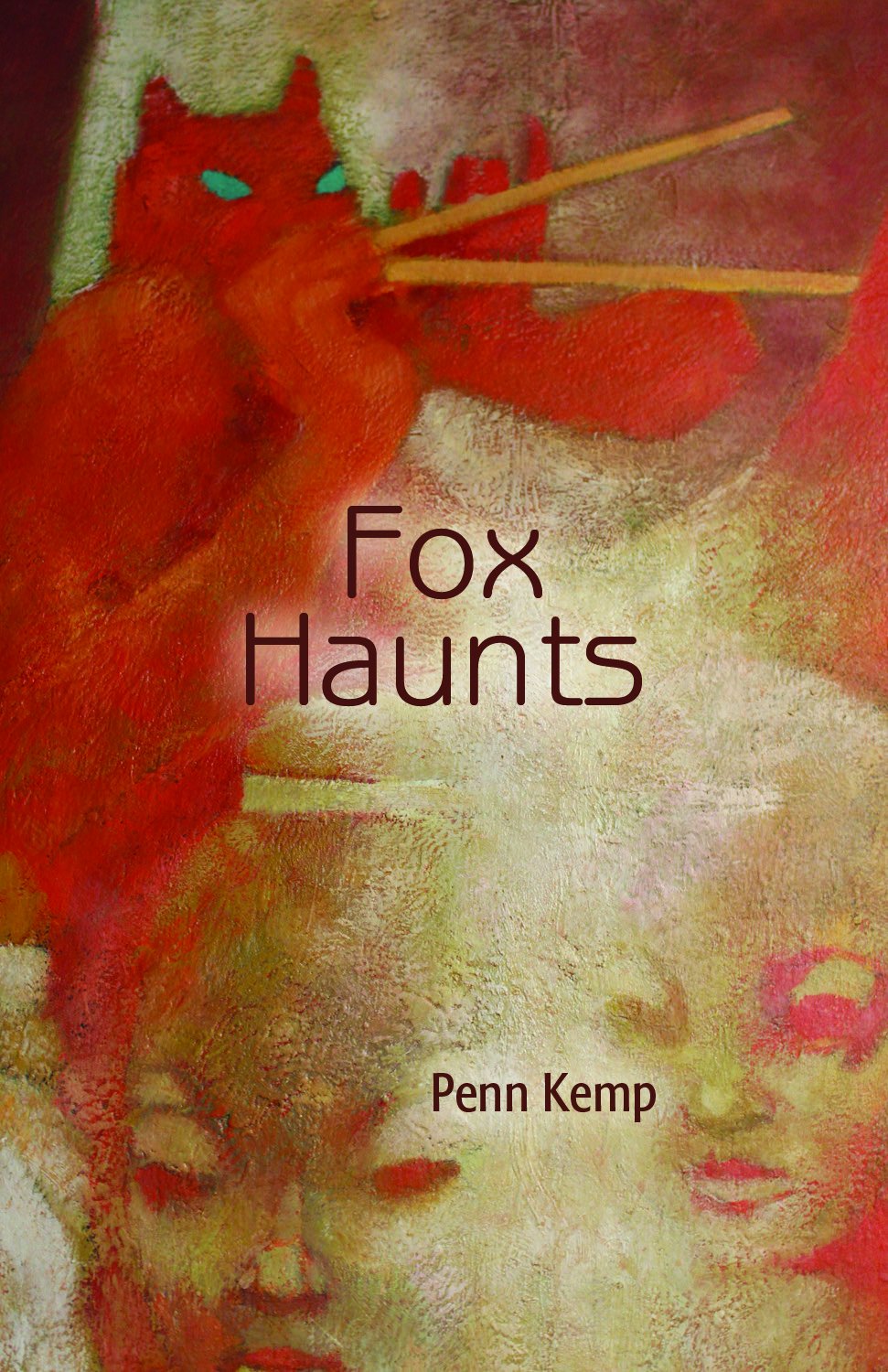 Penn Kemp’s Fox Haunts is also a book about how a wild animal can inhabit our urban lives and our imaginations. She also braids myth, science, literary allusions. But the voice here is different—more personal, less specific about a particular city inhabited by the fox and more intrigued with the dichotomous essence of the animal in our minds.

The poet’s “I” is established from at the beginning with an autobiographical poem about a child imagining the fox in her night-time bedroom—hungry, prowling:

… He was going to eat
me alive. Unless I played dead. I froze into the mattress.
The folds of the sheet turned marble. A frieze. The fox could
not smell out the stiff and still. I could sleep. Warily.

In subsequent poems, the fox often becomes ‘you’, a fellow creature to be addressed. But he remains always risky; even if you order a tame fox from the Internet at great expense, it will still be too skittish, too easily bored:

Better keep him busy, entertained or he’ll
run amok into your cushion, your couch,
your nightmare.

Fox is an animal reported on in New Scientist and “What I hear on CBC.”  Kemp incorporates intriguing scraps of biology, like evidence that prey animals are gifted with the ability to forget the trauma of being chased, that foxes can see the earth’s magnetic field, that they may be adapting to city life to avoid hunters. Such information forms the context for arresting poetic imagery:

They look on the easy prey of pets, soft
and vulnerable bichon frises left outside
by themselves in the yard, those with not
defence but a petulant, startled bark …

… Given such ready supply
of sweet fat food, Fox laughs and moves in

The paradox—it may be easier and safer for the wild animal to live near humans—is one more riff on the idea of “wildness” that Kemp explores throughout the book. Fox is both hunter and the trapped beast; the untamed animal that wears “dainty gloves.” He is the outcast who takes back the territory of our backyards: “Kudos for taking back the night, Nox Fox.” He is the ‘rewilder’ who calls us to Be Wilder.

The poems are suffused with a tension between the real creature of our urban backyards and the creatures of our imagination, individual and collective. “Who can tell foxfire from phosphene?” the poet asks in “When Eyes Close,” an evocative short lyric about the patterns flickering in our brains when our eyes are closed. The poem’s 12 lines encapsulate one of the basic questions in philosophy: what is the relationship of the human brain to a real world?

“A blur of orange, a smudge or smear/Could manifest as creature any time, // Could grow into the idea of Fox …” she writes. Pattern becomes story, but it all starts from “what glimmers, eyes shut.”

shaking his index as reproof.”

This section is broad-ranging and stuffed with facts that are literary rather than biological: The word “shenanigans” may come from an old Gaelic word for fox. The constellation we call Canis Minor is, in Greek myth the Teumessian Fox which could never be caught. Artists from WB Yeats to Alice Munro to Kurosawa have some kind of fox relationship. However the section as a whole feels forced, as though the author has been working her way through a googled list of “fox in popular culture.” A number of the pieces don’t feel as though they have been transformed into poetry.

Nevertheless, Fox Haunts is a haunting brush with Fox’s vanishing tail. The human-animal connection is elusive, interstitial, “inner and outer, on / the verge.” And Kemp’s long career as a sound poet is apparent in the sonic delight of lines like:

Fox, you are epic,

You are a theme of tales…