My grandfather, absolutely foreign,
his sheared sealskin angular hat set right
straight on the middle of the top of his head. Not
cowboys, but his buffalo coat I saw only
thrown over the hood of the car to keep
the engine warm and thought he was wrong again,
in his Old Country fashion, but he was right,
you can keep the inanimate warm with something
that was once alive. “My country.” The stones
of Odessa, the Black Sea was a terrible thing,
black as oil and cold, I thought, steps went
straight down to it and the waves licked at them.
Terrible too the cold avenues of Winnipeg, where
the Jews slotted themselves into streets named
Selkirk and Salter. Tea with lemon,
sucked through a sugar cube, poppyseed roll
in the oven. And outside, the smell of wet wool,
clean city smell, the taste of the screen door
and my own blood — how our flesh loves metal
at that temperature, cold that sings in the brain
like a fever. And it wasn’t just winter,
it was the squeak, squeak of the swings
my father and his brothers made, the heart-
shaped, spade-shaped leaves of the lilac bush,
my father turning, turning, spading the black soil.
What does a Jew do with a garden? We grow beets
for the borscht, rhubarb, dill for the pickles,
cukes; we grow peas for the kids to pick and eat,
that never see the table. But when Don Messer’s
Jubilee came on TV, we turned it off. The family
rose as one and turned our backs because there
is no irony in country music; you have only
the one hand, not the other.
It’s pure and straight and true.
Unlike life on the outside, or life
on the inside. Unlike being both here
and there or neither here nor there.
Unlike the red, cold, sweet and
sour heart of beet soup. 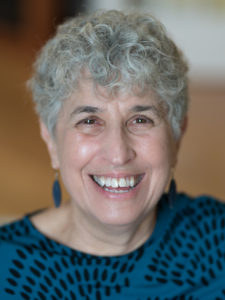 Rhea Tregebov’s seventh collection of poetry, All Souls’, was released in 2012. Her poetry has received the Pat Lowther Award, the Malahat Review Long Poem prize, Honorable Mention for the National Magazine Awards and the Readers’ Choice Award for Poetry from Prairie Schooner. Tregebov’s historical novel, The Knife-Sharpener’s Bell, won the Segal Prize in literature and was shortlisted for the 2012 Kobzar Prize.  She is an Associate Professor Emerita in the Creative Writing Program at UBC. Follow Rhea on Twitter @RheaTregebov.