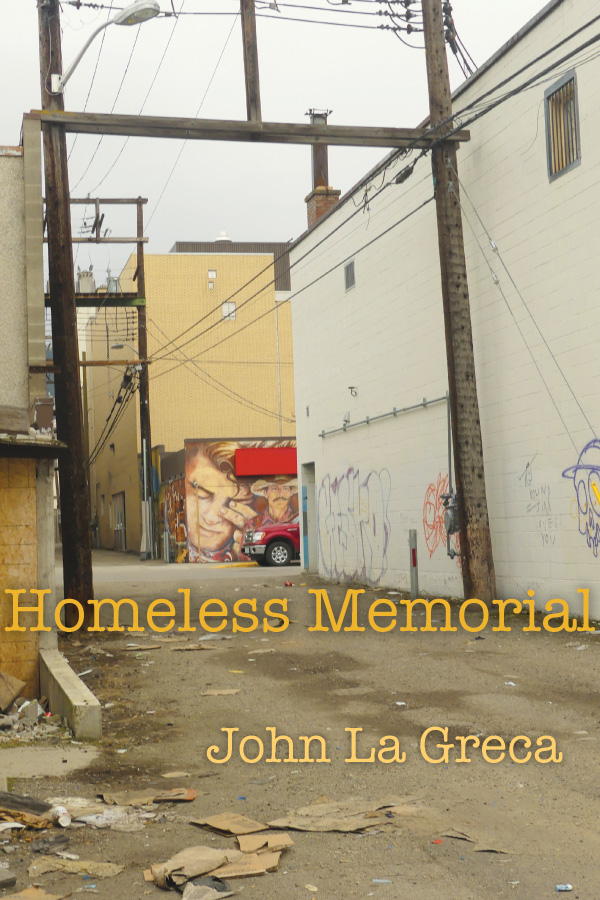 The first twenty years of my life I lived in Vernon, BC. I had a home. Which I usually took for granted. It was where I returned most nights, save for sleepovers and one night in a jail cell, futilely scrubbing fingerprint ink like Lady Macbeth. But that’s a separate story.

I went back for a writer’s residency at Vernon’s Caetani House in grey November pre-snow where I spent a great deal of time not writing, instead strolling the gardens and my hometown, the home of once homeless poet John La Greca.

I met John at Vancouver’s Poets Corner, where he read alongside industry heavyweights to a packed room. Despite the caliber of readers, it was John who people spoke most about – a complex, compact man with outsized talent. This is the man who tended that garden at Caetani House, years ago, coaxing order and beauty from ugly patches of wildness, much like his writing. Homeless Memorial is an autobiography in poems, life on the street from the inside, weeds of grit sprouting next to humour and optimism that persevere like prize orchids.

In a creative screening room we take our seats with “Terry Gilliam’s Revenge,” the author’s mental film pooled at our feet.

Striving at tricks to change shit to a valuable commodity.
I’m in a similar boat as the alchemists.

While reality rears through dialogue in “Homeless Memorial,” the title poem.

And laconic “Don’t Look Different from the Clones” shares a satisfying moment of connection.

Some six-year-old kid
Looked at me in the library.
I gave him the finger.
He smiled back at me.
I think I made his day.

In person, La Greca’s cinched jacket hood could be mistaken for blinders. His view however remains panoramic. Black and white was the only way to capture the author in a photo, his face encased in shadow. Same as his writing. Not darkened, but monochrome – refreshing barbershop poetry in a genre of coiffure salons. We know without apology when La Greca’s hungry, horny, happy, or scared. I imagine editors keen to thresh the work, which would almost certainly mute the voice. As is, we read directly from La Greca’s keen mind. Akin to music aficionados insisting on scratchy Muddy Waters LPs over remastered digital, correctly choosing authenticity over the dilution of polish.

“If I go for a walk, I find Sveva whispering in my head”

Which I understand, having heard her in that space, where she wrote in my hand details of her life I didn’t know until she told me posthumously. Homeless Memorial is an insightful extension of Vernon – a home, or none, unrefined and inviting as the garden La Greca tended, this green-thumbed writer with residence fluid as poetry, his verse perennial.

John La Greca is Canada’s Charles Bukowski, writing with deep and at times blistering honesty and humour of a side of Okanagan culture never seen in tourist brochures. For nearly fifty years, he has been our greatest poet of the streets. For all this time, he has lived with a mind given many diagnoses, including schizophrenia and obsessive compulsive disorder. He has been in and out of care since 1967, surviving on inadequate government and community support, drawn by poverty, curiosity and community into close relationships with homeless and disenfranchised people on the margins of society. Out of these circumstances, he has grown in strength, compassion and stature.

Vancouver author, poet, songwriter Bill Arnott is the bestselling author of Wonderful Magical Words and Dromomania. His poetry appears in the League of Canadian Poets Heartwood: Poems for the Love of Trees and Paper Dart Press PLAY anthologies and online. Bill performs at events in Canada and the UK.