(at the Royal Ontario Museum)

How sleep loves bones:
nightly she tends Tyrannosaurus,
comforts through the thundering seasons of its life
and in its death holds deep its darkening bones.

Discovery, slow dynamite, brings into light those bones
and Latin-names them, leaches them of data,
resurrects them into this skeleton above us balanced,
skull posed downward toward a whiff of prey.

Parched spaces pattern the dark bones
exposed against the white geometry of windows,
where stark light through years of days would bleach them.
Is this the end, the static heaven of a sunny day?

Or does the huge head nod?
Is this instead a solstice, one attenuated day
which sleep now coaxes toward an eon of descent?
Is there a greater cycle bearing us round,
bones, data and discoverers, into another dark
where sleep and love are one? 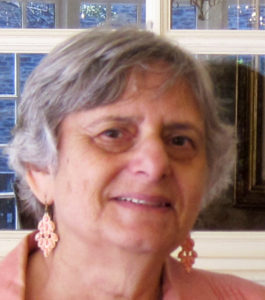 Marvyne Jenoff first published poems in Canadian Literary magazines as a student at the University of Manitoba in the 1960s. Since 1972 she has published four books of poetry and experimental fiction with Canadian literary publishers. She is also involved in the visual arts, frequently exhibiting her collages in the Toronto area, where she lives. She is currently working on a collection of poems to be called Bones’ Business.