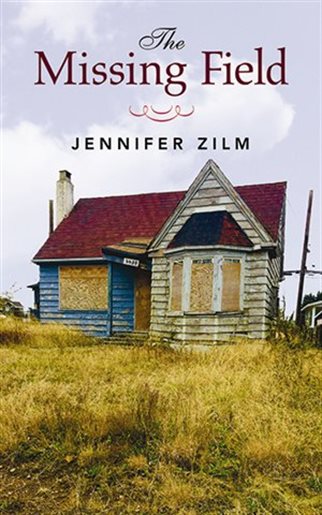 1.  I met Jennifer Zilm at Banff in May 2016, when we were both participants in the Writing Studio. She told our group by way of introduction that she collected bibles and wrote about G-d and country music. She was assembling her MS for The Missing Field, amongst other projects; I was writing a final section called “Ghost” for my second book, Ledi. I’m fairly sure I went to Banff to meet Jennifer.

2. And that she has only four emotions: tired, hungry, (I forget the third), and can’t count.

3. Things are opaque, things are fleeting. They disappear into themselves, into others.

4. Things are lost. As she says in her Acknowledgements to The Missing Field, she writes with loss in mind.

5.  ποικίλος—poikilos. When I finished “Ghost,” in the last week of our residency, I walked down into Banff and decided as I wandered along Bear Avenue to get a tattoo. I texted Jennifer. She was supposed to meet me by the river, but it didn’t work out. We’ve been texting ever since. I wanted something Greek. She suggested ποικίλος, other things. But that’s her word. I ended up going with γλυκύπικρον, which described my experience of writing Ledi. Sappho, fragment 130: “Once again Love, that loosener of limbs, / bittersweet and inescapable, crawling thing / seizes me.” (Translation by Diane Raynor). Later Jennifer let me keep her copy of Anne Carson’s Eros: The Bittersweet to continue reading on my Greyhound ride home to Vancouver. RIP Greyhound.

6. We met in Banff, but live in the same part of east Van, ride the same busses and SkyTrain lines, never once crossed paths. I write a line in a poem about the “Read the Koran” sign picked out in white on the roof of a house as I ride the Expo line. She knows it instantly—“22nd Street Station,” just past the Schara Tzedeck Cemetery—has already been there. Jennifer:

Then once I was listening
to He is my Everything on an Eastbound SkyTrain, disembarked
in New Westminster, walked up a hill into a brown brick
Pentecostal church and they were singing the same song. Grace.
How G-d forgives the off-key voices and doesn’t scoff
at black velvet paintings

I love that line.

7. Her geographies map onto mine: “the Eastbound bus / travelling you deeper into darkness” (“16 Hastings”).

8. “Page 404: not found:” a poem of erasures in a collection of ephemera, search terms, pages not found, the missing, the lost. I think when we met at Banff, The Missing Field was called Ephemera. I read the MS in the first week or so of our residency, and might have encouraged Jennifer to call it The Missing Field instead (from a line in “Phaedra’s Suicide Note”: “To dream in the missing field”); we worked out the idea of a missing middle section called by that name. In some ways we work along parallel lines; if Jennifer’s field is the library collection, the fonds, mine is archaeological, the gravesite, the body as archive. In Ledi I’m working with fragments too, burnt coriander, rosehips, the tattoos and wild silk tunic of an Iron Age woman, desert flowers and their ghostly bloom; the form itself a notebook to collect the pieces of her life, of my life, and stitch together a narrative. “Heyyou!—this postcard, like every other, is just fragment / of a larger journey” (“Postcard: a desert sestina”).

9. In “Two Postcards from a Redhead in the Desert” the speaker, let’s call her the poet, describes her “sun-punctuated body” as calligraphy, the desert a scroll: “And the desert is speaking / my ginger skin bright, bright red.” The cook in the Frank Sinatra Centre cafeteria

took one look at me and said ma atratzah,gingy?
My vocab is limited but I know what and want
so I pointed to couscous, sweet and sour chicken, and said zot
—this. Nevertheless, conjugate me.

I like how the details cook in these lines: Sinatra, ma at ratzah, gingy, couscous, sweet and sour, zot.

10. In a little stationary store called Gingko & Ink in Banff we found a collection of Hermes Baby rockets—tiny portable typewriters—in different scripts, including Hebrew. The carriage moved left to right. “I reverse the Hebrew verbs, / write remember when I mean / to spell out forget, the syllables / as I say them / zachar / sound / beautiful as oblivion / even as the word moves me / backward as I read right / to left” (“Fragments of Forget”). Maybe Jennifer started typing out the first lines of Genesis. Something like that.   Ting.

11. Sometimes she drives me crazy and I break up with her.

12. One day we went to the bank of the river and drank whiskey at noon, talking “Love Minus Zero/No Limit,” talking poetry.

13. Another day, down to the old Banff cemetery. She’d liberated a sheet from one of the beds in her hotel room. Spread it out amongst the grave markers. Notebooks. Ink. Books. Pots of yoghurt and cans of diet Pepsi. She read my MS of “Ghost,” which describes a road trip I took through the Mojave desert in the early 90s. Scrawled notes in the margins. What to keep and cut. A heart next to Art Bell, “men calling down conspiracies and angels.” But too much Portuguese! (An inside joke, long story).

14. This poem is one of my favourites: “A daughter is precarious: What We Know about Job’s Daughters.” And what do Job’s daughters know? “they know tribes of men can die because one man touched one woman / they know their details may only be primitive midrash, / their hymns are lost […] But still / the songs non-canonical lost / say poikilos talking / about their dresses and their / voices.”

17.  One of the “reconstructed fragments / from the lost hymnbooks of Job’s three daughters”:  “…no I am still minding the things of the earth / that’s why I’m singing….”

Jennifer Zilm is the author of Waiting Room (Book*hug, 2016) and The Missing Field (Guernica, 2018). She lives in Vancouver and works in public libraries. She is a failed Bible scholar and still sometimes thinks about joining a cult. In 2014 her favourite words were fragment, soft, threshold, girl, room and turning.

Kim Trainor‘s first collection, Karyotype, was published by Brick Books in 2015. Ledi appeared with Book*hug in 2018. Her poetry has won the Gustafson Prize, the Great Blue Heron prize, and the Malahat Review Long Poem Prize, and has appeared in the 2013 Global Poetry Anthology and The Best Canadian Poetry in English 2014. She lives in Vancouver.