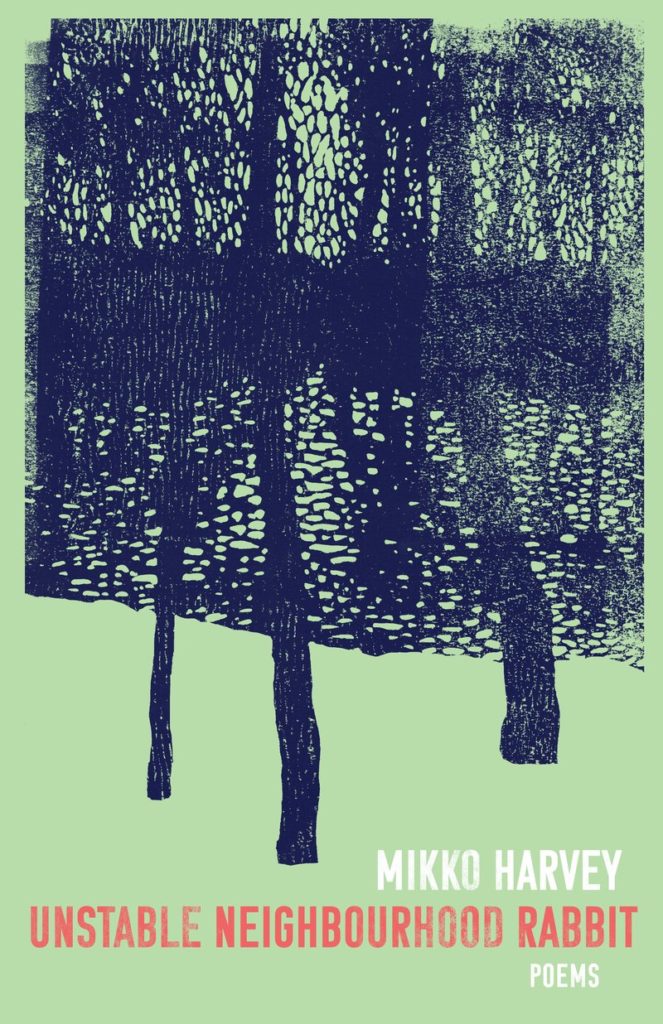 When a book of poetry opens with a tiny poem that reads like a haiku but contains elements of a three act play, you know you’re in for a curious, mind-expanding journey. “Autobiography,” the first poem in Unstable Neighbourhood Rabbit, begins… The bomb and the raindrop overlap briefly. As I read through the poem I found myself wondering if “Autobiography” is, perhaps, about human conception, the genesis of a creative person? The poem ends with an explosion, an arrival of sorts:

Reading this collection brought me back to the same feelings of awe and surprise that I had when I first encountered Harvey at the Thin Air, Winnipeg, in 2018. I was at the Festival with my poetry book Rooster, Dog, Crow and felt an immediate affinity with the other animal poet on stage.

Harvey’s presence was warm, polite, and inviting. His poems can be both frightening and hilarious in the same stanza.  As he read from Unstable Neighbourhood Rabbit, there was unease in the audience – as if they didn’t know whether to laugh or cry. There was at least one poem that evoked a collective gasp from the auditorium. Listen to the words, Harvey implied with his deadpan tone, pay attention.

Before I continue I have to disclose that my brain always makes a huge associative leap when I see the words rabbit and Harvey on the same page. This leap involves James Stewart playing Elwood P. Dowd in the nineteen fifties movie about a wealthy drunk who has visions of a six-feet three-inch rabbit named Harvey, the most unstable neighbourhood rabbit ever! The movie’s Harvey is a mischievous rabbit who is especially fond of social outcasts. Reading Mikko Harvey’s poems I was soon to discover my associative brain was right on the mark –social misfits and animals, sometimes real and sometimes imagined, inhabit every page of Mikko Harvey’s highly original book.

Rabbits inhabit the forests and yards of Harvey’s poems along with beetles, butterflies, bobcats, deer, goats, hawks, horses, lichen, pigs, reindeer, snails, squirrels… .  The animals are sometimes worshiped, tortured or sacrificed (I feel a need to say, that to my knowledge, no animals were harmed in the making of this book).

one squirrel from the pack
is chosen at random
to be pinned to the tree,
legs pulled back, underbelly exposed
while the others take turns
biting it, eating the heart

Many of Harvey’s poems are situated in the forest, the place of secrets and unrequited love. In “The Town” a dog kills a hare

He took its throat in
his teeth and thrashed

letting my fingers rest
on the skin of (her)back.

There are poems of transformation in which human becomes animal, only to be sacrificed. In “The Bird Call Association” the winning bird call comes from Sarah who sang/ a black-and-white warbler, utterly clearly.

…we slid her bare body
into the tub of gasoline and the Game master struck
and dropped a single match, declaring: Burning Wing.

In “The Masses” the extraordinary rhyming and visual power of the poem makes the poem’s ending even more disturbing when the narrator encounters a boy in the designated play area for kids.

He pulls the skinned
corpse of a cat
out of his knapsack.
The eyes have been pulled out
and stuffed in the mouth.

Finally, in “Amy”, the unstable/ neighbourhood rabbit population is being addressed along with the language/ of cruelty.  The poet moves into an apartment with his girlfriend and they raise a rabbit, Amy, in the backyard. Our narrator imagines telling his girlfriend that he is…

…the worst thing
that could have possibly happened to you.
One night I will break Amy’s neck.  I will cook her,
and eat her, and feel her blood moving
in my blood.
I will breathe on your neck and fall asleep.

Almost all of the poems in this collection have those jaw-dropping endings that I keep coming back to. Harvey accomplishes this by juxtaposing people and/or objects that normally don’t belong together and lacing them together with image, plot, and emotional tension – story-telling techniques not often found in poems.

There is a fabulist quality to several of the poems that invite us to inhabit a ‘once upon a time’ place. Once we settle into that magical and unstable place, Harvey masterfully pulls the rug out from under us. He leaves us gasping for air, we don’t know what hit us, but in a good way.

Let’s talk about holes for a moment. Not the Wonderland hole that Alice fell into chasing the hare (although that rabbit hole is implied in the book too). Let’s discuss “Break Into Blossom.”

Bless the men with holes in them, and bless the women.
Bless eight hours of uninterrupted television.

The man who cried while the woman laughed

The thin kid shooting baskets. …The cat
who lets the spider live.  The construction
worker who drops a brick on his foot, which stings
but he just laughs.  Bless the laugh as it evaporates.

The tension between the ‘flawed’ hole and the aspired to ‘wholeness’ we all crave, is articulated in “Putt-Putt,” a poem set on the golf course that ends with the heartbreak of  Let the touch of that forgetting be enough.  And, in “The Hole,” our narrator clarifies: We all have a hole/ we’re trying to fill.

Sometimes, these holes are being filled in acts of mutilation or self-destruction. In “Butterfly Hunter,” the narrator carves the shape of a butterfly into his cheek which flapped/ open, bleeding—/ a simple red wing.

Like our movie rabbit, the poet shamelessly inhabits his shadow animal. The unstable neighbourhood rabbit in question lives in all of us. He embodies the spirit and energy of poetic risk. Harvey’s ability to make normal situations new and strange is one of his greatest talents.  Combining metaphor in equal amounts with a distraught psyche that’s allowed to freefall, he heightens and liberates language.  In “Cannonball,” Harvey says People are so afraid of falling, they don’t enjoy the flying, but the truth is they’re the same… . This book is steeped in delicious strangeness. Harvey is fearless in his determination to write poems that shake up the reader, startle us to full attention.

In “The Critic Falls in Love” he writes: Nature is always mirroring/ itself back to itself.

The wind undid my shoelaces.
An elm tree I once trusted
pinned me to the sidewalk.

Perhaps this is how great poets thrive? We feed our shadows, nurture the unstable neighbourhood rabbit’s journey down the imaginary hole. We externalize our fears, create our own movies and invite others in to watch the critters of our everyday experiences being transformed into extraordinary encounters with the imagination. Or, as Elizabeth Bishop writes, Real frogs in imaginary ponds.

A final self-disclosure, I’m named after James Stewart. My parents named me after the American actor because they were very fond of the man who played Elwood P. Dowd in Harvey. It seems that the invisible rabbit keeps reappearing in my life, this time in Harvey’s fearless and highly imaginative book of poems. I’m grateful for the book and where it took me.

Mikko Harvey is the author of Unstable Neighbourhood Rabbit (House of Anansi, 2018) and his poems appear in places such as Iowa Review, Kenyon Review, Lemon Hound, and Maisonneuve. In 2017, he received the RBC/PEN Canada New Voices Award. He currently serves as an associate poetry editor for Fairy Tale Review, and lives in Ithaca, New York.

Jim Nason is the author of six volumes of poetry, a short story collection and three novels.  He has been a finalist for the CBC Literary Award in both the fiction and poetry categories.  He was on the ‘Longshortlist’ for the 2018 ReLit Poetry Award, and his poems have been included in anthologies across the United States and Canada, including The Best Canadian Poetry in English 2008, 2010 and 2014.  Jim is the founder and organizer of Canada’s annual human rights poetry event Meet Me in the Middle: Writers on Rights. Visit Jim’s website at www.jimnason.com.