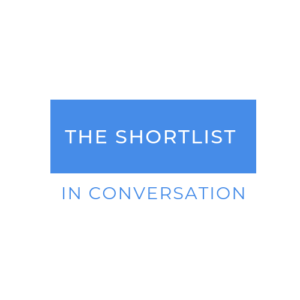 Klara du Plessis: Your poems in East and West are some of the most formally cohesive contemporary work I’ve read recently; you do wonders with the stanza, how you allow form and visual repetition to flow. Considering the book’s title and how you’ve further divided it into four sections, each coinciding with one of the compass points, I’m curious whether geographic location might (or might not) be mirrored in the structure of your poems on the page? Or whether your interest in the four cardinal points informs the formal nature of your poetry?

Laura Ritland: That’s a beautiful and generous interpretation, thank you! Although there isn’t a precise formal mechanism that joins my interest in space with my obsession with poetic structure (I wish!), I was trying to make a general thematic and conceptual link between structures of orientation and poetic form in this collection. Structure, like the Cartesian cardinal system, occupies a major tension for me, as that which is at once given and resisted: “given,” in the sense both that I’ve been made to think “East” is not “West” and that such binary or categorical forms of space and identity-making actually impact how we see and move through the world; “resisted,” in the sense that I’m curious about how I can live within those given structures in such a way that not only undoes them, but makes them liveable (or just bearable!). All this being said, I do think a lot of this collection simply revels in the beauty of form, in ways that are indeed sometimes visual, as you point out.

The visual is crucial to Ekke as well! I admire the visual puns throughout the collection—though “pun” may not be the right term, as your eye for visual cousinship between words both English and Afrikaans traces not only how words coincidentally look the same, but are in fact semantically entangled. I’m thinking of the way that “Ekke” becomes (re)composed into “ek” and “ek ke” and “ek ek.” Or the iterations of “Spieël,” “Speel,” and “Spel.” What does this visual play afford for your poetics? 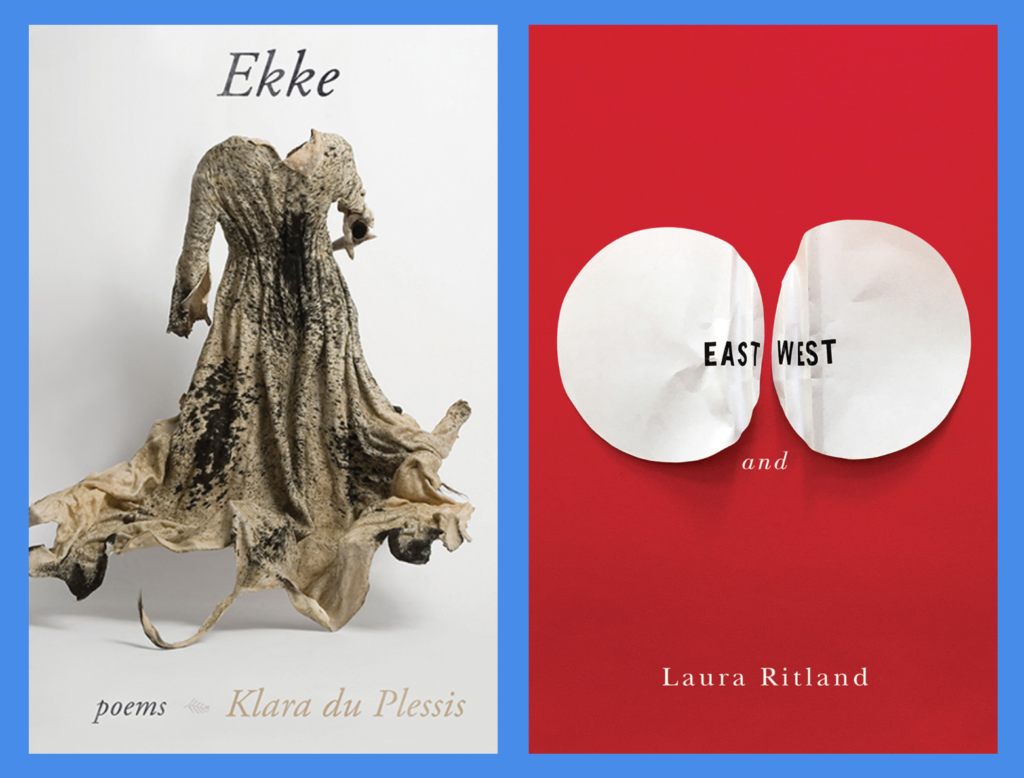 KdP: I’m tempted to answer this question in two, oppositional ways. On the one hand, I have massive respect for the autonomy of words, how self-contained they are, how beautiful they are. If you take a word and place it on a table like a vase or some kind of porcelain ornament, it holds its ground. Each word, while functioning as the raw material for poetry, is also, on some level, an independent artwork, a finely crafted aesthetic object. Words are also visual. On the other hand, though, I’m really interested in the potential slippage of language, its malleability and even arbitrariness. A standing joke for me is that my partner knows me so well, I can use any random words and he’ll know what I’m trying to communicate! In the example you provide, though, “Spieël” (mirror) melts into “Speel” (to play) contracts into “Spel” (game). And this movement or play or collaboration of language articulates sentiments which one single word might not have been able to do. The fracturing of language ends up being semantically cumulative. In terms of the mutation of one word into the next, I usually consider the process sonically more than visually, although now that I think of it, this play resembles moving image-style art. Poetic stop-frame animation. A word halts then shifts into the next and so doing mirrors the indeterminacy of meaning.

This plasticity of language seems aligned with how you described the tension between Cartesian and a more intuitive experience of space. You describe, for example, how “Another country crumbled / from my father’s mouth” and mention a sense of “geographic hunger.” I’m wondering whether you can talk a bit more about the relationship between language and landscape/geography/country in your work? How landscape gets inscribed through poetry?

LR: As a Canadian poet writing in English—a language which has violently renamed the land, forcibly co-opting it to fit a premeditated version of space—I can never write without a complicated relationship towards landscape. I’m fascinated and bemused by how historic acts of naming attempt to re-encode and recreate imperial space—for example, in how we have a “London” and “Thames” river in Canada, or that the beach nearest my parents’ house in Vancouver is named “Spanish Banks.” By naming land, the colonizing subject makes a “there” there—establishes a flimsy and, often, terribly violent fiction of place, familiarity, and belonging. So, on a basic level, I strive to be conscious that when I describe landscape, I may be potentially participating in this colonizing act. But I am also interested in how poetry can expose the fallacies and contradictions inherent in this naming. “Norway”—the poem you quote from about a country “crumbling” from the speaker’s father’s mouth—pokes fun at this nostalgic fictionalizing of place; it questions if there can ever be a stable site we can call home—whether that be a long-lost fatherland like Norway or a nation-state like Canada. I’d like to believe that in the kind of plasticity that poetic language affords, yes, poetry can make us conscious of, and even revise, the way colonizing subjects relate to land. The slippery play of language can, perhaps, destabilize dominant assumptions about how words relate to landscape.

The opening poem of Ekke (“First of all we no longer write in black”) also seems to grapple with questions of language and landscape: “Repurposed, repatriated, / stones estranged in new names.” Do you see your work as trying to unsettle or rethink the relationship between naming and land? What strategies do you employ to do so?

KdP: Yes absolutely. I think our concerns and interests are overlapping quite consciously here.

In South Africa there is this practice of writing place names in stones (painted white to pop from the landscape) on mountain-sides close to towns. If you’re driving on the highway and nearing a town, the name is thus immediately visible as a geographic marker. I’ve always been fascinated by this phenomenon. On one level, the process of writing on or in the landscape with the landscape itself as medium is quite potent, a kind of land art or land literature, if you will. On another level, this process also signals a heavy-handed inscription of colonial entitlement. The symbolism is so stark, especially with the projection of whiteness onto the stones. Stones also have a solemnity to them, they are monumental and they matter. So when I write, “First of all we no longer write in black / but in white / stones,” those stones are both gravestones and mystical awareness, and either way they invoke a gravitas which necessitates a moment of silence, of thought, and of responsibility in me as the poet and, hopefully, in the reader. Inscribing these stones simultaneously with generative possibility and the burden of South African history is a gesture towards presence, of acknowledging the past (and continuing present), without writing a political tract or feeling that it is my place to do so.

To conclude perhaps on a lighter note, I’m really taken by your poem sequence “Our Latter Day Pigeons.” The poem alludes to Picasso, which piqued my curiosity further since I just recently saw Picasso’s “Las Meninas” series of paintings in Barcelona, including nine large canvases of pigeons. Was this an influence for you or a coincidental reference? Tell me some more about the “beauty of the pigeon’s plumage,” “the delight of sequin and pomp”!

LR: The reference is coincidental, but no less wonderful for its coincidence! Thank you for directing me to it! And now that I think about it, “Our Latter Day Pigeons” is somewhat cubist in its approach, in the sense that it tries to take several looks at the same thing … Although, pigeons themselves are such amorphous creatures, uncannily variant in their flocks of seeming-sameness, that I suppose one can never look at them the same way twice anyway! The poem was intended as an ode to the wilderness one finds in the city. As a west coaster living in Toronto at the time, I was going through some angsty and fairly stereotypical yearnings for “Nature.” It’s deeply consoling to me that the natural world can permeate even the most concrete of cities: yes, pigeons are a little creepy in that one finds them, like Starbucks coffee shops, everywhere around the world. But that they continue to make nests in inconvenient places, poop on cafe tables, and make the streetlights into a forest canopy—that’s sign to me that nature is more resilient than human destruction can blot out (for now, at any rate).

Since we’re returning a little to the theme of visual art, I’m eager to ask you about your book’s cover! I was continually drawn to the image: a sculpture of a woman’s dress made in cowhide, by Nandipha Mntambo. It seems to be in perfect resonance with your collection’s questions about identity, negative and positive definitions of being, and various aesthetic and material figurations of women’s bodies. Did Mntambo’s work inspire this collection? Or was this sculpture’s connection to your work a lucky happenstance?

KdP: Oh I’m glad you like the cover art as much as I do! I’ve followed Mntambo’s work for years now and always come back to this series of reshaped cowhide sculptures. I wasn’t thinking directly about these sculptures while writing (and actually only saw them in-person once the Ekke manuscript already existed), but I knew of them, so I guess  in a way they might have been a latent reference. When my editor and I started thinking about the front cover, I first suggested one of Mntambo’s similar sculptures of a woman kneeling on all-fours. Despite it being perhaps a bit gentler, softer colours and so on, it also seemed less autonomous, an introverted, even subdued female figure. The figure on the cover has attitude. Her body seems to be thrusting forward and making a way for herself into the pages of the book. I like that. 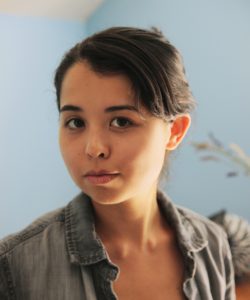 Laura Ritland’s poems have appeared in magazines across Canada, including The Walrus, CNQ, Maisonneuve, Arc Poetry Magazine, The Fiddlehead, and The Malahat Review. She is the author of the chapbook Marine Science (Anstruther 2016) and recipient of the 2014 Malahat Far Horizons Award for Poetry. Born in Toronto and raised in Vancouver, she currently divides her time along the west coast between Vancouver and the San Francisco Bay Area where she is a PhD candidate in English at the University of California, Berkeley. Her debut collection East and West was published with Véhicule Press in spring 2018.