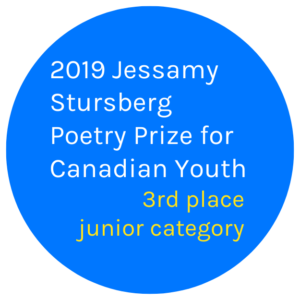 There were two roofs.
One was black, one was grey.
In between them was a sky.

Sometimes, the sky seemed so far away.
Sometimes it was near.

On hot summer days,
The clouds would drift aimlessly between the two roofs,
While a breeze swirled around white petals
that settled in the embrace of the shadowed path.

On cold winter nights,
The stars would speckle the space between the two roofs,
While snowflakes danced in the frozen air,
And fell onto the translucent ground.

On warm spring days,
The sky was like a brush of paint between the two roofs.
A dim lamp post would stretch upwards,
While the breeze tickled overhanging ferns.

On cool autumn evenings,
The sky would completely disappear.
There would be nothing between the two roofs,
Except for the chilly wind.

On those days spent in that little path,
When I looked up…
I always saw the sky between the two roofs.

From the jury: The atmosphere created by this poem evokes a sense of peacefulness laddered with the constraint of an urban or suburban view. The author’s use of repetition and choice of images engage the senses as a response to a sky that “was like a brush of paint between two roofs,” as well as a window into appreciating the natural world through the seasons.

Jamie Wang is currently a Gr. 8 student. Some of her hobbies include reading, playing piano, and drawing. One of her aspirations is to teach piano (She is doing her Lvl. 10 piano right now along with history and harmony & counterpoint). Her favourite subjects are Math and Humanities. Jamie has two younger siblings, three including her dog, and they all “constantly annoy her.” Her parents like taking her on a lot of trips and vacations over the summer, mostly camping. This is usually where she gets her inspiration to write poetry from.
LEAGUE OF CANADIAN POETS: What inspired you to write “The Sky Between Two Roofs“?
Jamie Wang: I usually walk/bike to my piano lessons, and I always take one specific shortcut. It’s this secluded, narrow path that has one house on the left and one on the right. Whenever I looked up, their was the sky between the two roofs and it seemed so different than the one you would gaze up at normally…because it felt like it was only my sky. Because I’ve taken piano for around 10 years now, I’ve been on that path countless times and it hasn’t changed one bit since ten years ago.
LCP: How long have you been writing poetry?
JW: Surprisingly, I don’t write poetry as a hobby or regularly. However, whenever I’m inspired, I will be really focused on writing poetry. I’ve had a few bursts of inspiration over the past year.
LCP: Who are some of your favourite writers? What are some of your favourite books?
JW: I really liked the Hobbit and The Lord of the Rings series by J. R. R. Tolkien. When I was in Gr. 5-6, I was obsessed with the Percy Jackson series by Rick Riordan. I also really liked The Little Prince by Antoine de Saint-Exupéry. I had read the book when I was younger, and we had to read it in Humanities recently and I really enjoyed it because it brought back so many memories.
LCP: How do you see writing and poetry being a part of your life over the next several years?
JW: I really want to improve on my poetry and writing skills. I would like to write poetry more often and pick it up as a hobby. During the next few summers, I will be travelling to a lot of places around the world which will hopefully give me more bursts of inspiration to focus my poetry on.

LCP: If you could give other students one piece of advice about writing, what would it be?

JW: My advice would be to write with your own unique style. Develop and revise it, and also write about the things you actually want to write about.

LCP: What is your favourite thing about poetry?

JW: My favourite thing about poetry is how you can express yourself in a different way. Additionally, you can capture the essence of things through words. Your poem could be abstract, elegant, or creative, and still depict your message.