water is the keeper

holding memory within its waves;

the washing of death.

the shore, liquids drying from

shapes your mind to die.

ocean asks to save this,

to solidify this transition

to the next world

the water crushes the building

of a life, making the cycle

true in the eyes

making the gates from one ancestor

an open sore on the ocean’s

by the crescent cove,

return to the sea.

we leave it to others

is the greatest disservice

to the dead, but what

is the thing that truly makes

bodies roll in their grave?

to fit a story to free those

dividing light with the space

that a dead (wo)man’s silence

was once a sacred place

a retreat from the

sludge of the Earth

from the misfortune of

not knowing we were

the wretched of the earth

that we naturally destroy

and drain the dignity

out of all we touch.

we held on tight to the

almost safe in its inevitability

almost scary in its ability

to make any asshole

a saint once (s)he’s

memory holds even the dead

caught up in its own

the dead may be the only way

we can reset humanity. 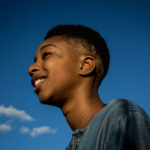 Whitney French is a storyteller and a multi-disciplinary artist. She is the editor of Black Writers Matter, a creative non-fiction anthology published through the University of Regina Press. Her writing has been published in Geist Magazine, Quill & Quire and anthologized in Black Notes: Young Black Voices and The Great Black North: Contemporary African Canadian Poetry. She lives in Toronto.

Canthius celebrates poetry and prose by women, trans, nonbinary, Two-Spirited, and genderqueer/gender non-conforming writers. The magazine is published bi-annually on the unceded territory of the Anishinaabeg and the traditional territory of the Ojibway and the Mississaugas of the New Credit. Recognizing the historical underrepresentation of certain groups in the Canadian literary arts, Canthius is committed to publishing diverse perspectives and promoting equity in the literary arts.