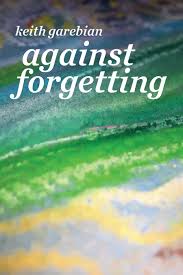 “A poem can hold more mysteries more easily than any factual timeline,” writes Naomi Shihab Nye — 2019-2020 Young People’s Poet Laureate of the Poetry Foundation of Chicago. Nye’s line aptly describes the holding-effect of Keith Garebian’s intricate documentary voice in Against Forgetting — a collection of twenty-eight poems comprising the fourth volume of what might be called a ‘Tetralogy of Witnessing and Becoming’. In these pieces Garebian revisits the ground of his combined histories — the barbarized Armenia of his father, the Anglo-Indian heritage of his mother, the multicultural Bombay society of his childhood, and his journey to maturity in Canada — “repeat[ing],” as he writes in the introductory Note, “a narrative that implies connections it does not explicitly state.”

Garebian’s earlier explorations into this fraught autobiographical territory are covered in Pain: Journey Around My Parents (Mosaic Press, 2000), a book of meditations, anecdotes, historical narrative, literary commentary and prose poems that represent his first coming to grips with the trauma of extremity; in Children of Ararat (Frontenac House Poetry, 2010), a personalized ‘witnessing’ and ‘re’/membering of the 1915 Armenian genocide; and in Poetry Is Blood (Guernica Editions, 2018), a tour-de-force passage into multivalent poetics demonstrative of deep generational upheaval. With Against Forgetting, Garebian rounds out, as it were, the ‘tetralogy’ in a sage and “unglazed” portrait —  from birth to present — of “soul trying to break through / words … peculiar slant of memory, / inclinations of surfaces, / enchantments of the self,” striving against forgetting, toward integration.

The opening poem, “Forgetting” — prefaced with an epigrammatic definition of ‘forget’ — verbalizes the deliberative thematic tone of the work. In the folio verso piece, “Ways of Forgetting,” readers are reminded, grammatically, that remembering and forgetting “have conditionals,” are “factual and contrafactual,” “real and unreal.” Which is to say that remembering can be hypothetical, “partial,” “wrong,” “mismanaged,” even creative. Things fade, details get lost, concealed, and “desires build new tissue.” “The curious past grows curiouser,” puns Garebian in closing the poem — quipping both memory and Anglo-enchanter Lewis Caroll together with his plucky heroine Alice who cried “Curiouser and curiouser,” so surprised by the transmutations of her travels she forgot (as if) “how to speak good English.”

Garebian’s palette is expansive. In “Fire,” the forces of the author’s birth are both geographical — “born near water”; and astrological — “Cancer, my first memory is fire.” The personal is plural too: “In Bombay, fire was common, communal: / Zoroastrians prayed facing the sun … / Hindus worshipped Agni.” And the elements are mutual, even as they’re individualized: “Fire a beast whose fierce breath / lived in me,” Garebian proclaims, “I could hear the portentous. / I did not know then what I would / be saying of it.” Water and fire serve destiny — as thematic through-lines and aspects of constellations of pain. In “Torment” — flash-forward to Canada — Garebian finds elemental mutuality in the company of other immigrants: “In the 60s, I taught boat people, / whose adolescent minds couldn’t shake off sea water … the acrid / memory of smoke and flame.” The experiences of water, smoke and flame differ for teacher and student, yet from the teacher’s perspective, they’re connective. Grief is expressed as deeply-embedded, empathically felt.

The fire theme is personalized further in “Reading Ashes,” with the opening line “My parents, chronic smokers / … He, the one cremated, / remains in a gleaming urn” — “urn” providing the ecumenical reminder that “you are dust, / and to dust shall you return.” Garebian’s strongest voice is declarative, commemorative, also rhetorically interrogative. In the poem “Autobiographical Whispers,” “Question of origins is smoke. / We can always be somebody else / behind a smokescreen.” Here he touches on a motif that’s given specifically artistic treatment in his collection, Frida: Paint Me as a Volcano (BuschekBooks, 2004); namely that of the mask as expression of authentic and plural identity. We are never one just one identity, and even our ‘smoke-screened’ personae can be real if we save the appearances. In “How I Was Made,” Garebian quotes Gertrude Stein in service of what is saved / remembered: “…you are never yourself to yourself except as you remember yourself.” What Garebian remembers is “spasmodic … slant, never fully of a single place.”

The poems in Against Forgetting are laid out like memory — in point / counterpoint, detail / association; chronologies compressed and intermixed. In the pivotal piece, “The Retreat,” an “Old Victorian house … / with a compound gate never / closed” evokes the formative impact of first residence. The poem rehearses the multiple influences of Garebian’s childhood socio-cultural matrix: “Pathan, Goan, Marwari, Anglo-Indian, / Hindu, Muslim, Irani, Parsi, / Catholic, Jew.” “Anglo-India” extends this thread: “Always part of someone else’s story … Anglo-India ached / for lost glory, choked in dervish / dust.” Garebian’s bequeathal is one of intermingling and toleration, also of colonial injustice, ethnic subordination, and the will to overcome. In one of the most poignantly personal pieces, tellingly titled “Pigment,” he closes with a candor that alludes to a layered, deeply-rooted father-son conflict as well: “My father worried my skin would darken / if I played too much cricket or soccer. / What whiteness could be added?”

In Water,” as “a diarist of water,” Garebian circles back to his boyhood Bombay: “Having been born near water, I have read / water … Water’s own bright grace, my element… Fishermen were here before the English.” The vital line is: “Where had the sea been before the land appeared?” Here he intones at his most expansive — the inference being that we are all from elsewhere before we are from here — wherever here is. Even the land is from elsewhere, even the water. In other words, otherness and displacement are as existential and universal as arrival and departure; as ubiquitous as becoming and unbecoming.

In “Second Country,” where “snow and ice replace heat and dust,” Garebian affirms that in Canada he “feels safer … there is no more Empire, just colonial residue…” Canada is a country where “poetry changes nothing,” he asserts. Except that poetry has, by his own admission, affected his own personal unfolding. In an interview, he once told me that he’s freer than his father was ever able to be, because he has given voice on the printed page to ‘witnessing’ his parents’ histories and his own — something they were never able to do.

The long and summative closing poem, “Self-Portrait in a New World,” celebrates a life’s g/leanings. Herein Garebian pays homage to peers, poetry mentors, and works that have touched, influenced, and indeed changed him. He names Olivier and Shakespeare, quotes Coriolanus and Othello, American poets Jorie Graham, John Ashbery and Ocean Vuong; cites Dante as more valuable than Derrida, and nods to Anne Michaels in the line “the weight of water, the cost of oranges.” “Literature kept me sane,” he maintains. “Though stories and poems ended, / their shadows never vanished, / my world changed with their changes.” In reaching the last line, one grasps the mysterious sense that “The past is here,” held in heart, memory and printed word.

Keith Garebian is the author of eight books of poetry and eighteen books of nonfiction, including the acclaimed biography William Hutt: Soldier Actor (Guernica Editions, 2017). Against Forgetting (Frontenac House Poetry, 2019) is his eighth poetry collection.

Elana Wolff is a writer of poetry and creative nonfiction, literary editor, and designer and instructor of social art courses. Her sixth collection of poems, Swoon, is forthcoming with Guernica Editions in spring.