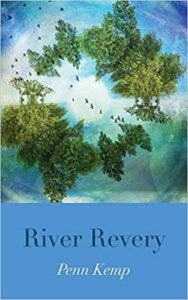 London Ontario’s my home. In part. Lived there two years. Important years. Growth years. It’s why I feel kinship, connection with the community and the meandering multi-named river that sews it together. I feel the same for the Laureate Emerita that truly calls this place her home, living in the house she grew up in, a songbird’s flight from the water, the faintest tidal tug hinting at Great Lakes and storm-capped Atlantic.

Penn Kemp’s River Revery came to me just before Christmas. It felt like a present; the cover – Mary McDonald photo, Mike O’Connor design – a copse of evergreens reaching, waving, to an avian line, all in reverential shades of aquamarine. Opening pages, I unwrap Penn’s poetic world, her gift, to us. From River Revery, the title poem:

“Water abounds here, with this river … My rant runs along the river in / long twilight along the shore, a / migratory route for warblers / alighting in cottonwood, a trill.”

Within this beauty, insights, each message clear. From True Cost: Walmart versus Woodland:

“How do you evaluate a loss of habitat / tamped down by asphalt, crushed by // power complexes where brand names / replace the reality of life that feeds us? … Ask what lasts. Glacial meltwater carved / a spillway through the Ingersoll moraine, / flood plain to terraced loam to upland clay, / Carolinian and northern Great Lake forest.”

Yet in pure Penn Kemp style, with poignancy comes playfulness. From All for Art:

“The photographer takes me down to the river, / my favourite spot. I dress up, thinking to just / stand by the bank and recite a poem while he // shoots. But no, he wants me by the water so / we scramble down the steep bank, brushing / back willow branches. He holds them back, // grinning: ‘I won’t let them snap till you’re / past.’ ‘Do you happen to have sisters?’ I / ask, recognizing the temptation he resists.”

Like Thames tributaries, this volume’s unexpected bends surface through mixed media – verse interspersed with photography and matrix barcodes leading us to live readings, music, song and film – Penn’s poetry spoken, sung and captured in video vignettes. A showcase of performances and collaboration unfold as we leap from the printed page to stage, YouTube and SoundCloud, Kemp continuing to push creative boundaries and blur artistic lines, her work a poetic map where latitude and longitude no longer apply.

Despite a nasty tumble and wrenched ankle during an accompanying photo shoot, our author perseveres. Again, from All for Art:

“For such an immersive experience, standing / on the edge won’t do. I offer to wade in, / rolling up my pants like Huckleberry Finn, / giving my all for Art as / always.”

Indeed. For such an immersive experience standing on the edge simply won’t do. Once more this poet gives her all. Few do it as well. No one does it better. While dedicating this book to her grandchildren, she could just as well dedicate River Revery to the planet, to which we owe our all. And need. Like Penn Kemp, as always. 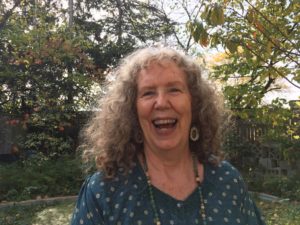 Poet, performer, and playwright Penn Kemp has been celebrated as a trailblazer since her first publication of poetry by Coach House (1972), a “poetic El Niño,” and a “one-woman literary industry.” She was London’s inaugural Piet Laureate (2010-2013) and has been granted numerous municipal, provincial, and national awards. Chosen as the League of Canadian Poets’ Spoken Word Artist (2015), Kemp has long been a keen participant/activist in Canada’s cultural life, with thirty books of poetry, prose, and drama, seven plays and ten CDs produced. 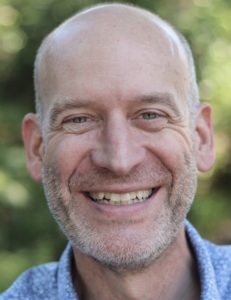 Author, poet, songwriter Bill Arnott is the bestselling author of Gone Viking: A Travel Saga and Dromomania. His poetry, articles and reviews are published in Canada, US, UK, Europe and Asia. Bill’s a national songwriting finalist, poetry award recipient and finalist for Whistler Independent Book Awards with Gone Viking: A Travel Saga. When not trekking the globe with a weatherproof journal and outdated camera phone, Bill can be found on Canada’s west coast, making friends and misbehaving. @billarnott_aps