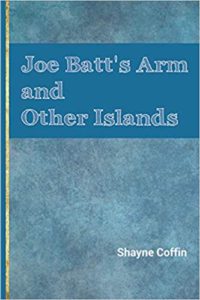 Location. Location. Location.
Joe Batt’s Arm and Other Islands follows the poet Shayne Coffin on a US-Canadian road trip where he uses destination as lyrical inspiration, be they as culturally significant as the house of Ralph Waldo Emerson in Massachusetts or as comically crass as a highway motel in Summerside, PEI. The collection is divided into three parts, the first travels New England to visit the haunts and homes of literary legends. The second is a tour of the scenic beauty of Canada’s eastern provinces. The last contains a buildup to the poet’s ultimate destination of Joe Batt’s Arm, where his family surname, Coffin first washed up on the shores of Newfoundland. The poems in all sections can be passionate as well as whimsical, at once polished and raw, and they often flow with a rich undercurrent of nostalgia for an older, simpler era. I loved the personification Coffin brought to much of his work, alternately he is “an iceberg” in New Brunswick, while “a fortress” in Quebec City, or “a kite” in Deep Bay. Ultimately, he is “an island” at the end of the book, reminiscent of the “others” that are included in its title.

There were so many poignant lines within this collection, I used up the last of my yellow highlighter pen before I finished reading it. Knowing these were penned while the poet rested against the tombstone of Emily Dickinson or while looking upon the coastal waters of his ancestors made the words ring with a truth and romance that superseded even their skillful construction. I found myself taking the book to read by the river or other meaningful spots so that I could honour the importance of locale in the creation of the verse. The “dirty rainbows by the gutter” in PEI or “the secret little cracks that reveal ashes in the waterfall” in Cape Breton, captivated me in my own special places. I suggest you grab a copy and savour its poetic pilgrimage while enjoying some of your own.