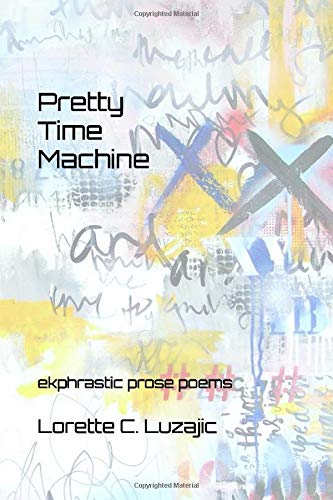 The whole ekphrastic thing’s morphed somewhat since Greeks coined the term, describing art based on other art – adding creative layers, facilitating praise to enrich the overall experience. Like bacon. The addition simply makes things better. This artistic endeavour, however, represents life. Everything has a facet of ekphrasis to it. Reading a book is more than a visual undertaking. Opening a print publication entails multi-sensory stimulation – the tactile feel and aroma, be it heady new ink or the scent of old paper and glue, a dusty hardback from a second-hand bin or well-thumbed paperback left on a train. Every book has a mixed-media personality, stories to share beyond the representation of words.

In Pretty Time Machine, Lorette Luzajic does what she does best, finding those veins in art’s ore, revelations resulting in complementary shared experience. Enlightening moments. The ekphrasis of life. From Luzajic’s introduction we know, unequivocally, we’re in for authenticity.

I’m afraid of this book. I was afraid to write it, but I didn’t have a say. It was writing itself. … For a moment I believed that I could just write poetry about dogs or lakes and not the things I tried to bury.

Here on Manitoulin, in the wild valley between cut quartz hills and blueberry moss, we are Canadian to our marrow. Our soundtrack, lonely loons.

With this we’re plunged into Canadiana, like those startling moments I catch myself at sporting events belting out the anthem as though it’s the most imperative thing imaginable, which it always is at that instant. Luzajic’s Play Doh – for Martin (after The Velveteen Rabbit, William Nicholson, 1922), strikes that chord, the same necessity to share. But I simply cannot pull a quote. The work is flawless, forcing me to reveal this Michelin-star course exactly as our chef intended it be served.

Coffee with Noah, the last day of fall. He’s learning to make kimchi, ever since he stopped making cider moonshine in his closet. We talk about microbiomes, about eating more liver. We talk about caroling for Halloween and not Christmas, amused by the idea of warbling “Don’t Fear the Reaper” at retirement centres instead of “Joy to the World.” Noah gives me a cell phone charm, a miniature Hello Kitty on a camel. It’s a trinket I’ve coveted for a long time. I wished I’d brought the little tub of plasticine that was at home on my desk. We could make spaghetti snakes, or small rabbits. We talk about how Cormac McCarthy should write short stories, even though he sees no point to them himself. The shorter the better, I think, argue for taking that lean language to its logical conclusion. Noah blinks both eyes behind his rimless glasses, considers Cormac flash fiction, worries at a cube of sugar on the saucer with one finger. He asks about Barcelona. I try to express a fraction of what it was like to see Gaudi’s spires and all those legs of ham. Well, Noah always wanted to hop a freight train and hobo his way across the prairies, and he tells me how he did it, in June, from here to Medicine Hat. I picture him with his diary and a thermos of fermented cabbage tied in the kerchief now on his head, soaring away in lonely locomotion. I imagine the slow stumbling stall as the train breaks in Alberta, spilling Noah and his notebook into the night, scattering a fluffle of hares.

Savour that. As I did for the better part of an afternoon. Before managing to portion off this sample to share from Motel California (after Mark Twain Hotel, William Wray, contemporary).

The stucco in your dim room was pink like puke, but a place like this had room for a bit of poetic license if it had room for you. There is a dusty machine in the hall flashing promises of cola, but when you get there, the coin slot is jammed. Instead, you drain three fingers of tap water and a splash of cheap gin into the mug by the TV. The packet of Nescafe inside it you toss, then retrieve from the trash, thinking better of it. Might come in handy, if morning ever comes.

Show me someone unable to relate and I’ll show you someone who doesn’t exist. If you’re unfamiliar with Wray, look him up. If you’re unfamiliar with Nescafe, I don’t know what to do with you. Except share another piece of Luzajic’s creative beauty to prove commonality. From Night Moves (after Northern Lights, Tom Thomson, 1917) – more Group of Seven, more national bedrock, shared place and time.

Robert, at the table. Among scraps of moose leather and round red apples. At cards, he is thin backed and straight as the arrowheads he collects. The wine tastes like cupcakes, a tumbler of smashed red velvet.

Without being there I know the taste of that red, that space of blurring lines, liquid definitions and sentiments – deep seeded feeling you wonder if you forgot, or never knew you knew – intangibles of taste and lineage and pride.

And from Pretty Time Machine, the title poem (after Gluing Collage, A.C., 2019) with the words of Muhammad Ali, “A man who views the world the same at fifty as he did at twenty has wasted thirty years of his life.” Resonant, to a fifty-year-old.

You do not have to look hard to find her: she is written on your face. Even so, you are your own, unowned, unknown, since you landed here small and perfect in the blue-brown bruise of early.

If I questioned the progress of my world view over the past three decades, reading Pretty Time Machine I no longer can. Lorette Luzajic has done what the Greeks tried to define with a term – blending voice, folding media, mixing art – the amalgam infinitely richer than components. Presented in eclectic and wondrous crosshatch, this is life. 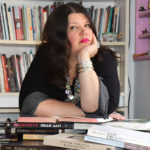 About the Author: Lorette C. Luzajic is an artist and writer from Toronto, Canada. She is the founding editor of The Ekphrastic Review, an online journal devoted entirely to writing inspired by visual art. Her writing has appeared in several hundred publications online and in print, including many anthologies. It has been nominated twice each for Best of the Net and the Pushcart Prize. Her award-winning mixed media collage paintings are collected and exhibited worldwide. www.mixedupmedia.ca 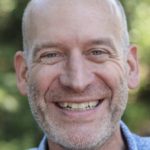 About the reviewer: Vancouver author, poet, songwriter Bill Arnott is the bestselling author of Gone Viking: A Travel Saga, Dromomania, and Allan’s Wishes. His Indie Folk CD is Studio 6. Bill’s work is published in Canada, the US, UK, Europe and Asia. Bill Arnott’s Beat appears in numerous magazines and literary journals. Bill’s received poetry prizes with honorable mention and is a Whistler Independent Book Awards 2019 finalist with Gone Viking: A Travel Saga. @billarnott_aps