Poetry is the voice of the human soul, speaking across time and distance 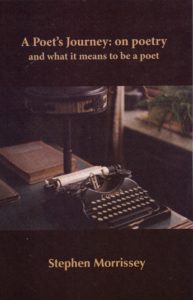 In A Poet’s Journey Montreal native Stephen Morrissey shares four decades of insight about what it means to be a poet and the process by which a poet can discover his “authentic voice”.  The book  includes astute impressions of other poets Morrissey has met along the way, among them George Johnston, Keitha Macintosh and Artie Gold who, like Morrissey, was one of “The Vehicle Poets” in Montreal, beginning in the mid-1970s.

What makes Morrissey’s book such a fascinating read is the thing which makes his poetry so indelible:  accessibility, and a hard won, pared-down wisdom.

Stephen Morrissey’s father died when he was six, his life abruptly and permanently reconfigured by fatherlessness.  Unable to verbally articulate his emotional devastation, at the age of 15 Morrissey began to express his feeling of being “damaged” and “different” from his peers (and from people in general), in poems.  The inexpressible had become expressible.  Profoundly “dispirited and disempowered”, he had found a way to connect / re-connect with his “spirit”, and to empower himself, by himself – through poetry.  He instinctively knew that this was his only way forward.

A section from Morrissey’s poem The River:

Because I did not grieve

when I was a child,

I have spent a lifetime

grieving, always on the edge

and from My Shadow:

of Father who died-

of death – my burden

I carried even as a child,

Morrissey analyzed his life, in his diaries and poetry, during the years in which his stepfather was dying (when Morrissey was in high school), and following the dissolution of his first, early marriage.  During these years he came to the realization that “real art lies in the insecurity of life” – in the ability of art to capture life’s fragility and evanescence.

Early on, Morrissey made the decision not to self-censor.  This was due to his belief that, as he writes In A Poet’s Journey, “A poem that has been censored, that does not hold within it emotional, psychological or spiritual insight, has lost its poetic truth.”

As expressed in these lines from Divisions (1983):

all along I have worked at

cutting through to the truth

this for me was always

the point   the single point

Uncovering his “authentic voice” has lead Morrissey to a meticulous, lifelong examination of his Shadow.  The pursuit of that Shadow, together with his decision against censoring what he writes, has taken him to places in his life that other poets might just as soon forget.  Forgetting is not an option for Morrissey, however.  He believes that “to forget is to lose part of our inner being, part of our lives, part of our soul.”

That includes not forgetting “the ancestors” who have come before.  Some of Morrissey’s most evocative poems feature vignettes of who his family members were as individuals. Not having had the opportunity of getting to know his father, Morrissey was determined “to remember as much as possible” about his ancestors, in order to “keep an accurate record against time”.  During the process of which he became, in his words, “an archivist of memory.”  These poems are an exploration of human nature and of the interconnectedness of family over generations – in Morrissey’s case, as set against the backdrop of 20th century Montreal.   He calls them “poems of witness”.

“The ancestors visit us if we listen to them,” he writes, “whether it is in our dreams or by their actual presence”.

As exemplified in these lines from The Dead of My Life:

how often I return to them

the dead in my life

my son to sleep or a

dream that my Uncle Alex

was alive although we

thought (in the dream)

that he had been dead

As an undergraduate in college (Louis Dudek would later become a mentor at McGill), Morrissey intuited that the “central myth” of his life, and the central theme of his poetry was the Garden Myth – the “fall from innocence to experience”.  As he has said, “My nine published books follow the progression of my life as it fits the template of the Garden Myth.”   The Garden Myth is inherently fascinating and may be one reason why Morrissey’s poetry is so compelling.

Although a life-long observer “of the architecture of darkness” as he puts it (in his poem Waking at 4 a.m.) in another important sense Stephen Morrissey’s poetry is, as he writes, “an affirmation of the life force , the triumph of the spirit, and the survival of the individual despite what has been experienced.  This is the foundation on which my poems are written.”

The following extract from Reincarnation is reflective of this:

and memory. Events of old lives,

clothes divested as I divested

the past in meeting you,

in meeting you again

and again and again

Forty years of waiting for you,

a dark delirium of the soul;

we met apparently for the first time

but home is where we are together

in this room, this house,

the two square feet we occupy

in a single embrace

The “mapping of the soul” is Stephen Morrissey’s signature – and his genius.  His ability to transform the “the personal” into the “the universal” in his poetry is also what makes A Poet’s Journey an invaluable resource for anyone who aspires to become a poet.

About the reviewer:  A native of Montreal, Cynthia Coristine currently lives in Ottawa.  She is co-author of From Griffintown to the Square Mile: The Life James Coristine