Over ten years ago, I wrote this prose poem reflecting on driving in Ghana and about how incredible it is that a person wakes up in the morning, goes out in the world and returns in one piece in this country. The amount of traffic and the way people drive, makes me truly grateful to make it from point A to point B.

It is eight in the morning and a relative- one from your mother’s side- is driving you to town. Here, eight am feels more like midday. Radios are blasting, business is well underway and traffic is bumper to car door. A car squeezes in to the right of yours making a third lane; a trotro follows. Minutes later, the trotro driver starts cursing the driver of the car who has made a sudden stop, realizing that his makeshift third lane will lead him straight into a tree. Now, he has to get back onto the actual road but no one will let him in.  The trotro slices itself in front of your car forcing your cousin to jam his foot down on the brakes. You lurch forward, torso then head, like an alarmed pigeon. You are not wearing a seatbelt because no one wears seatbelts here.  Even if you wanted to wear it, the seatbelt is covered in red dust and partway stuck because it has not been worn in years.  Besides, the top you are wearing is light pink and the dust will show. This happened to you a few months ago when a fellow student offered you a ride to class. The diagonal seatbelt stain marked you as another new kid. Fresh off the plane. Still, a seatbelt would have been useful in this moment.

The trotro doesn’t hit your car, or yours doesn’t hit the trotro. You’re not sure who is in control here. But you’ve not been hurled through the windshield, you are fully alive, and there is not even a scratch on the car. Miracles.

It’s March 25th 2020 and once again, I’m in Ghana attempting to write poems. A few weeks ago, almost to this day, I experienced one of my worst fears about being in Ghana which I’d referenced in my poem- a car accident. There were four of us in the car. I was sitting in the passenger seat.  The semi-truck in front of us stopped suddenly but had no brake lights. Thankfully, we were not driving at top speed.  Had our car gone forward a few inches more, the glass would have shattered. Had the truck not continued moving…well, who knows. The front of our car was crushed with the hood pushed up to make a tent shape. The engine was pushed out of place and other mechanical innards sagged.  Our next task was to try to get out of the car without being hit by oncoming traffic.  Thankfully, driver from another truck, those big tankers that say “highly explosive” on the back, pulled over, got out and began flagging oncoming traffic to go around us.  He helped us out of the vehicle to the side of the road. Interestingly enough, this man’s name was Savior.

And so here we are, alive and present to witness what appears to be the end of the world as we have come to know it.  I’ve lost count of how many days it’s been since national governments first called for their citizens to return home from wherever they were and to self-quarantine. So instead of being out with friends, networking, going to cafes and co-working spaces, arts centers and beaches as I had planned to during this visit,  I am home self-isolating as, day by day, we watch what happens next with this global pandemic called COVID-19 or more commonly, Corona Virus.

Around the world public spaces are being closed. The numbers of confirmed cases worldwide are in the tens of thousands and are leaping daily. Friends are sick and we are nervous for them. Is it a cold or is it corona? Family members of people we know have died. They are already underground. Celebrities too. Just yesterday I learned that music legend Manu Dibango passed away from the virus. Sophie Grégoire Trudeau, the wife of Canadian Prime Minister, Justin Trudeau has tested positive and both she and the PM are quarantining at home. American actor Idris Elba has allegedly tested positive too. Corona virus is no respecter of persons. I’ve been sucking Cepacol lozenges, chewing chopped ginger, drinking water, washing my hands and sanitizing in hopes it will be enough. People have been stocking up on provisions- food, toilet paper (for some reason), disinfectant…anything we think can keep our worlds sterile. For the first time since I can remember, I am finally experiencing what it is to take life day by day.

If there is anything the corona virus is saying to us right now it’s “Borders? What borders?”. The spread has been so swift and wide, healthcare workers are being called out of retirement. It feels like we are living a movie we’ve all seen before. Yet, there is another entity that’s saying “Borders? What borders?” and that is poetry. Poetry, on its own or accompanied by music, also crosses borders to reach us.   Poetry came to me from the United States through Sunni Patterson who said “We pour cayenne pepper around the perimeter of a building to keep the police dogs at bay”; and Talaam Acey who said of the impact of the art form “Maybe this is God’s work…” Poetry has come to me through French-Cuban writer Anais Nin who told us that one day the risk of staying “tight in a bud [would become] more painful than the risk it took to blossom.”  Poetry has carried to me intimate an intricate scenes from – Sudan, India, Syria, through poets like Safia Elhillo, Nisha Patel, and Bashar Jabbour.

Within Turtle Island (Canada) and in different countries I’ve had the honor of visiting, poetry has been my passport into curated spaces. In these spaces, I have been invited to witness and record what was spoken. I have been able to speak my own truths wholly, humbly, and boldly.  Through poetry I experienced organic collaboration with Addis Acoustic Project in Addis Ababa, Ethiopia; I had the chance to honor Nina Simone at a Women’s Day Event at the Alliance Française in Ghana.  And through poetry, I found camaraderie in living room poetry sessions and at the Goethe Institute in Rwanda; Some poems even found themselves being recited from a canoe in the middle of a lake in Jouvence, Quebec.

Poetry was the magnet that pulled many of us together at the University of Ghana all those years ago when I was a student.  We were from Boston, Toronto, Winston-Salem, Chicago, Los Angeles, New York, Antigonish, and various locales in Ghana. We were Haitian, Ghanaian, Canadian, Puerto-Rican, and mainland American, generations deep. In the open-air corridors of the International Students’ Hostel we became acquainted by choice or by collision. One of these new friends named DK started a weekly poetry night called ULR as in “You All Are Invited” and each week, our stories, accents, and flavors, mingled in this one space. We recited Maya Angelou’s “Phenomenal Woman”.  We argued that America was not the utopia it appeared to be. The Diasporans talked about being called “Obroni” (meaning foreigner or white person) and whether they felt at home on the continent. We made poems about discovery and about being lonely and about ambition.

Today, around the world we are united again in uncertainty. Some say it’s biological warfare.  Some say it’s the prophesied end of days. Maybe it is both. Maybe this is how it ends. But for some reason I don’t believe it is. I don’t believe we will be wiped out but certainly, we are being forced to change. And so people are repenting. Others are solidifying their faith. We are being humbled. Doing fitness challenges, spending time with family and studying herbs. Borders are closing but people are reaching out to each other. They are singing to each other from their balconies and offering to shop for neighbors and the elderly. We are being forced to change our lives the way a January 1st never could.

And people are making and sharing art. People are reading each other poetry online. A fellow poet named Anjalica Solomon has made a YouTube playlist called Poetry for the Apocalypse and thanks to the internet, friends from across the globe can take in this curated collection.

Watch the first video in Ajalica Solomon’s “Poetry for the Apocalypse” video playlist:

I don’t know how this will end. I can’t sit here and say poetry will save us.  But as poets we can remind ourselves and others that art too spreads beyond borders and that ,while it provokes, it also soothes and heals. That may be the best we can do as we wait. 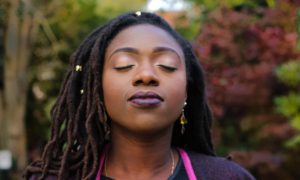 Abena is the third place finalist in the 2017 Canadian Individual Poetry Slam (Verses Festival of Words) and the 2016 poetry prize winner of the Writer’s Federation of Nova Scotia’s Nova Writes competition (formerly, Atlantic Writing Competition).  She competed in the Canadian Festival of Spoken Word in 2011 and 2016 as part of the Halifax Slam Team.  In February 2014, Abena appeared as a guest on Ghana’s highly acclaimed entertainment program The KSM Show. Her poem “Ice Cream” was published in the Global Fund for Women’s Imagining Equality project that same year. As a recipient of Ontario Arts Council’s Word of Mouth grant she produced her debut spoken album “Beloved” which she launched in July 2014. Her first book of poetry, The Way We Hold On (Pottersfield Press, 2018) was released in March 2018.

Abena is a creative spirit able to tell stories through different writing styles and yet maintains a distinct and authentic voice.  In addition to her love for writing and performing, Abena seeks to equip others to write and share their own poetry as a means towards personal fulfillment and empowerment.