The Voice of the Other

Growing up, I was always fascinated by history and geography, and as far as I can remember was perpetually in search of the other. The more ancient the civilization, the more exotic the hero(ine) or artist, the more distant the place, the greater my interest. Though I was raised in suburban Chicago, my mother had lived in France and stayed close to the language and culture, and my father enjoyed literature. When I began to take languages, I loved the sounds of French and the structure of Latin — wasn’t it great for the poet to be able to put the nouns and verbs anywhere in the poem? In my late teens, when I began writing poetry, my best friend was Mexican-American, and he opened another world, as did a year living in Europe, followed by university and comparative literature, in which the same movements, from the Baroque through Romanticism and Dada, manifested themselves in multiple countries, via translation.

When I arrived in Montreal, I found it a wondrous Tower of Babel, not only in French and English, but also with languages from every country in Europe and, as the years passed, from the Americas, Asia and Africa as well. Later I travelled for two years in Latin America, immersing myself in the cultures and varieties of Spanish in each country and region, discovering the English-speaking writers such as W.H. Hudson and Malcolm Lowry who had also left their mark, and working on my Portuguese as I went through Brazil.

When I returned to Montreal, I brought out two books of poetry, one of which, Crossing the Chaco, was a journal of my travels in Central and South America. I also became active in the Latin American community there, and began translating its writers’ work and my own, sometimes writing in Spanish or French as well as English for the multilingual poetry readings that sprang up. After travelling another two years in Asia and Africa, I settled down with my wife Ginette and daughter Edith, and took a doctorate in Comparative Canadian Literature at the Université de Sherbrooke, where D.G. Jones and others were bringing out ellipse, which specialized in poetry and was the only journal of literary translation in Canada, and for which I’ve continued to translate.

My thesis on Latin American writers of Canada eventually became a book, Latinocanadá, as did Compañeros: An Anthology of Writings About Latin America, which I co-edited with Gary Geddes, and which contained work by 87 English-Canadian, Québécois, Haitian- and Hispanic-Canadian writers. Since then I’ve continued to write poetry and to translate both Quebec poets and Latin American writers of Canada and from abroad. I also taught Spanish translation at Concordia University and was co-director of the Banff International Literary Translation Centre. Currently I’m translating the complete works (Volume One of two is out) of the Argentine avant-garde poet Oliverio Girondo, one of the three major experimental poets of Latin America in the twentieth century.

We live in a world that is now vastly more cosmopolitan than in the past. Languages and poetic traditions and innovations bump into each other, bounce off, meld with, and influence one another. With migration and immigration across the planet, multilingualism is everywhere. For much of the world, this has always been the case: Indians are accustomed to speaking their state or native languages, Hindi, and English; sub-Saharan Africans speak their ethnic tongue, one or more regional languages, and the colonial language used by the country; indigenous peoples of the Americas and Australia reawaken their ancestral languages and speak the tongue of their conquerors as well; Europeans are often trilingual, quadrilingual and more.

Literary trends and experiments jump from Latin America to Asia, from Canada to Mexico, Japan to the Netherlands through translation. Many people speak in a mix of different languages in their daily life, often fusing them into new dialects, such as Portuñol in northern Uruguay and Créole in Haiti. Authors may choose the language in which to write: Tahar Ben Jelloun of Morocco and Sergio Kokis, a Brazilian immigrant to Quebec, in French; the Franco-Ontarian poet Patrice Desbiens in English and French; Miguel Piñero and many other poets in Nuyorican. Most Hispano- and Luso-Canadian writers and poets have continued to write in Spanish or Portuguese, while others prefer one of the two official languages. Some, including the Bolivian-Canadian poet Alejandro Saravia, have brought out works such as his L’homme polyphonique, which includes poems in three different languages, without translation. Is a self-translation actually a translation, or is it a new work of its own, written in the other language? It’s invariably published without reference to translation.

When I translated my own book of poetry, Antimatter, into Spanish, I gave myself more latitude than if I’d been translating someone else. Authors often translate works of writers who inspire them, bringing innovations and new literary currents to their own work and spheres, as Baudelaire did with Poe in his Histoires extraordinaires, and Octavio Paz with his translations of the English metaphysicals. Poets writing in another language often enrich it by using unusual styles, such as the Baroque quality of the Salvadoran-Canadian poet Salvador Torres in French (as if Quevedo had arrived in Quebec), the lack of frills and unique way of expression of Conrad’s work in English, the staccato Dominican rhythms of Junot Diaz’s The Brief Wondrous Life of Oscar Wao, or the Chicana phrasing of Gloria Anzaldúa’s The Border/La Frontera. Multilingual mixing is more common in Spoken Word poetry, which itself reflects the influence of oral traditions, and is also found in the fusion of musical traditions, such as in Reggaeton, which combines hip hop with reggae and is sung in Spanish throughout the Caribbean.

Farther Out, Beyond the Reef

One of the odd things about living in other languages or cultures for long periods of time is how idiosyncratic one becomes. No longer do the confines of one national literary or even linguistic continuum hold sway. The frame of reverence includes eclectic sources; favourite writers and whole literatures may be unknown to others. This is also true, of course, of readers in one language who explore other cultures through translation. But the cultural migrant often actually takes on characteristics, outlooks, and thought patterns of the language of the other culture.

In a few cases, when a culture has been imposed upon the other, this can go too far: the Kenyan novelist Ngugi wa Thiong’o rejected English and began writing in his native Gikuyu and Swahili in order to reconnect with his linguistic self, and Indian writers in English have been criticized for deserting their own great linguistic traditions. However, when the migrant or traveller begins to think in various languages every day, and even to dream in them, why not use them all in his or her poetry, or even fiction?

The Chilean-Canadian poet and playwright Alberto Kurapel wrote six plays with alternate passages in Spanish and French while living in Montreal. Over the past twelve years, Flavia García, an Argentine poet and tango singer, and I have hosted Lapalabrava, a series of trilingual poetry readings with writers in French, Spanish and English, followed by a multilingual open mic. The events are popular, and although not everyone understands all three languages, they can feel the emotion behind them and appreciate the rhythm of the words.

The leading Canadian literary magazine in Spanish, with the odd name of The Apostles Review (it was founded in Buenos Aires under the military regime and didn’t want to attract attention), also includes work in the three languages, and in Portuguese as well (apostlesreview.com), from all over the Americas. Anglophone writers read in French at the series Les poètes de l’Amérique française in Quebec City and Montreal, where poetry is interspersed with classical music, and immigrant poets appear at events in French and English. Les Écrits des Forges, in Trois-Rivières (home of the annual Festival international de la poésie), has published over 120 bilingual editions of poets from Quebec, Latin America and Europe, and Mémoire d’encrier, founded by the Haitian-Canadian poet Rodney St-Éloy, specializes in immigrant writers and bilingual editions of First Nations poets who write in their mother tongue.

Whether spoken or read on the page, poetry always has a connection to chant, as Amiri Baraka and The Last Poets in New York and other groups have reminded us. When Maghrebian poets read in French, they often have the rhythm of Arabic declamation. Many poets, including Blake and Picabia, were also painters, and vice versa, at times using their artwork to bring out different aspects of their poems. Concrete poetry, with its combination of visual and literary art, has a long tradition in Latin America, and often doubles as sound poetry, thus including a third art. The great Quebec poet Claude Gauvreau ventured into language that he invented himself, as did Girondo in his last work, In the Uttermostmarrow. Linguistic fusion and creation are new fields for poetry, as The Four Horsemen presaged. The Brazilian poet and bossa nova composer Vinicius de Moraes wrote a poem in English and Portuguese, with some invented words as well, when he was in London in 1939. Inspired by him, I’ve recently written a poem titled “Lagos,” a celebration of the lakes of the world, in particular the Great Lakes of North America and Africa, alternating between the four (European) languages of the Americas and using cognates as often as possible. One has only to relax and open up to the sound and the mixture of words.

As the Chilean-Canadian poet Jorge Etcheverry said about one of his poems, “It’s meant to be understood through osmosis rather than in a linear, Kantian sense.” The world of poetry is now more filled with linguistic possibilities than ever before, and an eager audience of peoples from all parts of the planet awaits it. Below is the poem “Lagos”:

for Vinicius de Moraes, who wrote his poem “A Última Elegia” in both Portuguese and English, inspiring me to write this one in the four (European) languages of Africa and the Americas 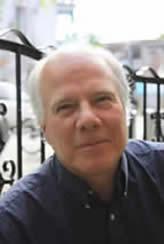 Hugh Hazelton is a Montreal writer and translator who specializes in the comparison of Canadian and Quebec literatures with those of Latin America. He has written four books of poetry, including Antimatter (Broken Jaw Press, 2nd edition, with CD, 2010) and translates from Spanish, French and Portuguese into English. His translation of Vétiver, a book of poems by Joël Des Rosiers, won the Governor General’s award for French-English translation in 2006. He is a professor emeritus of Spanish at Concordia University in Montreal and former co-director of the Banff International Literary Translation Centre. In 2016 he received the Linda Garboriau Award for his work on behalf of literary translation in Canada.