Anyone who has travelled to Portugal or spent time with Portugese people has heard fado – the guitar, the long melodic lines, the half sob of songs full of saudade. Fado is defined by saudade, a nostalgia that goes beyond a sense of loss to celebrate how irrevocably short and broken our lives are.

Zeca Afonso is recognized as one of the country’s great fado artists, but his most famous song has escaped the form and become a national anthem.

On April 25, 1974, Afonso’s song Grandola vila Morena played on the radio in Lisbon.  With another song (And After the Farewell) this signalled the beginning of a military coup against the authoritarian government which had ruled Portugal since the 1930s.

The people of Lisbon listening to their radios recognized the call to insurgency. Thousands poured into the streets, carrying banners calling for Libertidad and Fraternidad.  The YouTube video of Afonso singing Grandola vila Morena shows bell-bottomed young men with ferocious sideburns embracing sailors, and young women with short skirts and long hair giving them flowers.

Crowds sang Grandola vila Morena as the military pushed the fascist government out and started Portugal on the long road to democratic government, in what became known as the Carnation Revolution.

Both its content and its form lend themselves to popular uprising. Grandola vila Morena tells of fraternity among the people of the town of Grandola in the Alentejo region. Its vocabulary, intelligible even to an anglophone non-speaker of Portugese, includes friends, oaths and equality. The song is also easy to sing: each quatrain is followed by one that repeats the same lines in reverse order, and the second verse repeats two lines of the first. The line “terra da fraternidade” ends up repeated four times, each time to a different tune.  (The form is almost certainly why modern demonstrators get the lyrics muddled when they link arms and try to sing it.)

I first heard Grandola vila Morena when my son lived in Portugal for two years. I loved it, and wondered why Canada had nothing like it. Our closest is possibly Un canadien errant, but regardless of its lovely melody that song doesn’t quite cut it.  For one thing, it’s about an exile sending his dying breath and mon regard languisant toward his native Canada. No oaths, equality or fraternity here.

So, I wrote my tribute to Portugal, the poem Wishful:

This poem wants to be played on the radio

to announce the start of the uprising.

It wants people to link arms in the street

and sing it, teary-eyed.

This poem wants to believe in

fraternity and equality but

knows it can hardly say the words

Because it doesn’t admire skeptics,

this poem tries not to smirk

when it says the words

It wants to believe, but knows

eyes will not tear up

as people link arms to sing it

It will not announce the start of the uprising

when it is played on the radio. 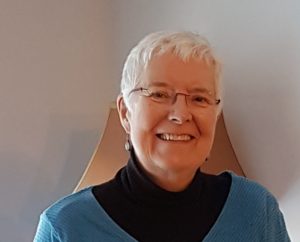 Mary Lee Bragg spent her childhood in rural southern Alberta and was educated in Calgary. She now lives in Ottawa, where she had a career in the public service focussing on official languages. Her award-winning poetry and short fiction have appeared in literary magazines and ezines in Canada, the United States and Cuba. She has published the novel Shooting Angels (2004) and two poetry chapbooks, How Women Work (2010) and Winter Music (2013).