Since the early twentieth century, by a process Ezra Pound called “fructification,” the poetries of East Asia  have nourished poetry in English. Pound used the term writing a preface in 1918 for Ernest Fenollosa’s essay, “The Chinese Written Character as Medium for Poetry.” That essay was published by City Lights Books in 1936 and came into my hands as a secondhand bookstore treasure in 1962.  I was inspired by it to study Chinese characters and so took Japanese in my last year of university. The choice of Japanese was related to the global political situation. The Cultural Revolution was raging in China. Not only was the movement attacking everything I found fascinating about classical Chinese culture, but it also made travel to China impossible.  I preferred to  study the language of a country I might one day visit, and, such was my monumental ignorance, I thought,  “Chinese, Japanese, same thing.” That misapprehension, however, harboured a truth I quickly discovered that literary Chinese had been an integral component of Japanese literacy for more than a thousand years. As a Japanese textbook for literary Chinese puts it so aptly, “classical Chinese is the old hometown of our hearts.” Having embarked on studying Japanese, I spent the next twenty years studying and translating the Chinese poems of a Japanese Zen monk, Ikkyū (1394-1481.)

Fenollosa’s thesis, in a nutshell, is that the pictorial quality of Chinese characters makes the language concrete and more closely linked to nature.  He presents a simple sentence, “man sees horse” 人 見 馬. “First stands the man on his two legs. Second his eye moves through space; a bold figure represented by running legs under an eye…Third stands the horse on his four legs.” Since a Chinese character was not designated  a part of speech but could be noun, verb, adjective or adverb depending on its context, Fenollosa regarded characters as ideally suited to representing the world and experience as processes rather than concepts fixed in the logic of grammar. He was particularly interested in metaphor as a process, “the use of material images to suggest immaterial relations.” Here again, he found Chinese characters advantageous because their metaphors are close to the surface. He cites the character ming 明 meaning everything from “shine,” “bright,” “clear,” to “intellectual acuity” but composed of two simple characters, sun日 and moon 月.  To be bright is to “sun and moon.”

Certainly, Fenollosa over-exaggerates the importance of the pictorial element in Chinese.  His presentation ignores elements in Chinese poetry that are much more important to Chinese readers: the music of tonal pattern and the ubiquity of historical allusion. Nonetheless, Fenollosa’s “misunderstanding” sparked a creative reaction  in Pound and the Imagist poets that firmly installed the short lyric grounded in concrete, sensual experience as a mainstay of modern English poetry.

Of course, the shortest form of lyric poetry is haiku. Again, Pound was in the avant garde, writing perhaps the first “haiku” in English:

Faces in the Metro

petals on a wet, black bough

Haiku is now embedded in English poetry even as part of the elementary school curriculum. There is nothing like haiku for compression of language, poetic openings that do not close.

Haiku also presents a paradox by being a “formless form.” Syllable count has been abandoned in most modern English haiku and although the three-line form is standard, one line can be enough.

Another traditional form of Japanese poetry, tanka, has gained ground in English. A Canadian journal dedicated to tanka, Gusts, began in 2005. The form (five lines divided into syllable lengths of 5, 7, 5, 7, 7), under its old name waka, goes back more than 1400 years in Japan. Waka composition extended into a social linking game (haikai) actually gave birth to haiku in the seventeenth century. Tanka are often written as a conversation. Here is an illustration from Reflections (2011), a book of response tanka by me and Naomi Beth Wakan. This example is from the honkadori “allusive variation” section where we pay homage to the practice of writing one’s own tanka incorporating a line from a poet of the past. Here we took a poem by Reizei Tamehide (1302?-1372) from Waiting for the Wind: Thirty-six Poets from Japan’s Late Medieval Age, trans.  Steven Carter, 1989)

I may well once more

travel on that self-same path

it is the real world now past

that is so fleeting and vain.

as to what is left to do

that is so bitter and sweet

that is so fleeting and vain

away for a month

the weeds have taken possession

of this garden again

that is so fleeting and vain

After years of translating kanshi (Chinese poems written by Japanese authors) and the poetic diaries written around tanka by Japanese women of the tenth and 11th centuries, I started writing tanka in English and long poems in free verse. Writing poetry helps me weave the world together, thread in forms, tenors, modes, and insights from other traditions, and, conjoin the past to now. I have been drawn to the glosa, a medieval form of Spanish verse, which has been so inspiringly reinvented by P.K. Page in  Hologram. A major form in Chinese poetry is the rhymed quatrain, which lends itself well to the glosa.  I have been experimenting with translating Chinese quatrains with rhyme (they are usually translated in free verse) and then writing a glosa upon them. I close this essay with one example which emulates Fenollosa’s ideal,  “to sympathize with the humanity and the generous aspirations” of Chinese poets of old. I should add by way of preface, that since poetry writing was a necessary skill for civil service in China, many of the great poets found themselves in civil service and often also found themselves being sent into exile for speaking the truth.

I scroll through your poetry by lamplight

poems all read, lamp guttering, sky not yet dawning

my eyes hurt, I douse the lamp, sit still in the dark

voices of the waves, headwind driven, against the bow breaking

I roll down the centuries to find

an old friend of another place and tongue,

I long to sing with you, harmonize

in rhyme, to breath you alive,

weave you into the geist of our zeit.

I’ve been scolded by a would-be lover

for preferring the dead to the living

yet cannot give up this kind of flight,

I scroll through your poetry by lamplight

seven to a line, four lines,

so dense in meaning spilling

higgledy piggledy into my English,

some lines short, some long,

not a poem at all to your kenning,

yet will rhyme unite our tongues,

poems all read, lamp guttering, sky not yet dawning

you had your troubles, your friend

Yuan Zhen had even more,

why must rulers always seek

sycophants rather than honest

as now, thrown to the sharks,

as your own, as he did yours

you both strove hard to make your mark,

my eyes hurt, I douse the lamp, sit still in the dark

in and out of office and exile

once your two boats met on a river,

you going upstream, he down,

you stole three days together to visit

a cave numinous with strange limestone,

down to us, reminding us to treasure

moments shared and words for their power

to resist all things threatening

voices of the waves, headwind driven, against the bow breaking 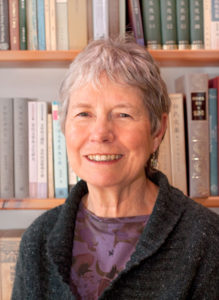 Sonja Arntzen taught classical Japanese poetry and literature for twenty-five years. Currently Professor Emerita of the University of Toronto, but living on Gabriola Island in B.C, she continues to research and translate works of classical literature, particularly women’s poetic diaries of the 10th to 11th Century. Her most recent translation is The Sarashina Diary (Columbia University Press, 2014 Since 2005, she has been publishing her own English tanka and haiku in journals such as Gusts, Eucalypt, Kokako and Red Lights. With Naomi Beth Wakan, she also produced two books of “response tanka,” Double Talk (2010) and Reflections (2011). In 2017, her “Glossa on Leonard Cohen’s Anthem” made the long list of the CBC Literary Awards Contest.