Recently I said to a Greek composer, “I’ve spent my life stranded between languages.” He said, “You have to learn more languages so that you can be stranded in more places.” I’ve started memorizing the Greek alphabet and a few words. Διάλογος is dialogue and ποίημα is poem. It’s a new beginning.

Communicating without a shared language is a skill I learned as a child in my northern settlement where the majority of the people spoke English as a second or third language.  I was surrounded by Ojibway and Cree along with languages from refugees and migrants.

As the Canadian born daughter of migrant parents, I entered school and was placed in row C with other children who also spoke no English. Our teacher labeled us dumb for life except we didn’t know what the word dumb meant. My father wrote to his sister, “A Beethoven would get lost in this system.”

When I was seven, a young teacher working a summer job in the gold mine, lent me a copy of Harriet the Spy. How could I visualise a dumb waiter or understand how Harriet managed to ride up and down in one? She inhabited a distant universe but she was a writer and this inspired me to begin my own notebook.  The teacher who handed me Harriet was fairy godmother number one. At age ten I started delivering the daily newspaper door to door; this was my version of Harriet’s spy route: I knew the lives of people.

In my high school graduating year my English literature teacher encouraged me to rewrite each essay as often as I wished, and he taught me grammar after school. I wrote in my journal, “I want to write poetry.” In Change Your World Michael Ungar writes, “The difference between Cinderella-the-princess and Cinderella-the-prostitute is the fairy godmother.” Paul Hamann was fairy godmother number two. He opened universes in my head, and in my future life I would learn to move with ease in new environments.

Traveling between countries and languages, I’ve had small embarrassing moments. When my Dutch friend asked how I was doing I said, “Ik ben mooi” and knew immediately I’d made a mistake when the cookie she was chewing flew out of her mouth; she was laughing. I wanted to say, “Ik ben moe.” There’s a big difference between “I am beautiful” and “I am tired.”

Stumbling over unfamiliar words while traveling is mostly an enjoyable learning experience. When faced with the culture of class differences, conversational heartache occurs more frequently. Didier Eribon in Returning to Reims writes, “When you spend time…with…middle class people, it is often simply assumed that you come from the same background.” A friend recently asked me if people in the north wear fur coats.  I said, “Fur is a luxury product. Many people in the north are severely impoverished. ” She said, “Don’t they have family living elsewhere to send them care packages?”

During my childhood our immediate neighbours had an official red sign stapled to their entrance door: Condemned Unfit for Human Habitation. Can we even begin to imagine what this feels like? In school I read that the difference between the working class and the middle class is visible in people’s collars.  I looked around and saw neither blue nor white collars. We were the working class: some with jobs and some with no jobs at all, often the result of severe racism.

Working for Statistics Canada during my last month of high school, I walked door to door with a long-form questionnaire. Wolfgang Lehmann says, “This idea that we’re kind of a post-class or a no-class society is maybe more dangerous than having some awareness of class…In the same way that it is dangerous to make the argument that we’re completely multicultural and there’s no racism in Canada.” For the Census I interviewed people who had no date of birth, no permanent residence, no income and the question about the number of rooms or washrooms was an absurdity for people living in a tiny room with no water.

Harriet the Spy is written from the point of view of the upper class who have servants and dumb waiters; imagining this world as a child was a lot like imagining a trip to Mars. Shannon Proudfoot writes, “Moving from one social class to another is like what I imagine it feels to move to a different country and learn a new language as a teenager: years later, your vocabulary may be flawless, you might have no trace of an accent, but a small part of your brain is always working very hard to translate and wondering if you got it right.” What truths should I tell about life in the north and are they the right ones for this context?

Knowledge of language from multiple cultural and class contexts is an asset rather than a hindrance, but it has taken years to understand and voice this thought. Eribon writes, “There is, in short, a moment when shame turns into pride.” Yet I continue to experience “the discomfort that results from belonging to two different worlds, worlds so far separated from each other that they seem irreconcilable, and yet which coexist in everything that you are.” Eribon is not talking about the differences between northern Canada and southern Canada, or Canada and Europe.  He’s talking about the difference between the night cleaner who is told not to touch the science lab petri dishes and Caravaggio’s painting The Beheading of Saint John the Baptist that the affluent are admiring.

My Greek friend said, “It’s easier now to socialize between the classes.  We all wear the same kind of clothes.”  When I lived for the first time in a middle class home in my mid-forties, I threw a party. You could overhear various languages being spoken as people from multiple cultural and class backgrounds celebrated together in my living room.

My partner also comes from a working class family, and is the only member of his family to hold a university degree. When I left the north, I attended university and started out by studying science. The meaning of the word culture depends entirely on the context. Culture was the green growth at the bottom of my petri dish, and not the paintings hanging in the galleries (not yet).

When I signed up for my first writing class the evening course was over enrolled and I had no writing samples.  The professor, Kathleen Tudor, asked what I had written and I said, “Journals and letters.”  She said, “Come to class with your armour on.” The daughter of a Nova Scotian fisherman, she was fairy godmother number three.

In times of prosperity and times of crisis let us be fairy godmothers for the vulnerable and strangers. Let us be our best selves for each other. The word culture originates directly from the Latin cultura meaning “growing, cultivation” and as a society may we continue to grow together.  The night cleaner washing the floors in the science lab may also wish to view Caravaggio and later write poetry. Let us provide others with the chance to find their voices. Let us write new poems and create new dialogues. 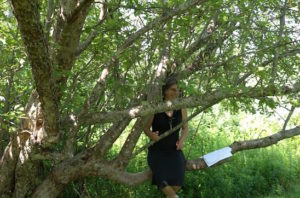 Eleonore Schönmaier’s collection Wavelengths of Your Song (McGill-Queen’s University Press) will be published in German translation in September 2020. Canadian, Dutch, Scottish, American and Greek composers have set her poems to music including Emily Doolittle and Michalis Paraskakis. She has won the Alfred G. Bailey Prize, the Earle Birney Prize, and the 2019 National Broadsheet contest, among others. Her poetry has been included in the League of Canadian Poets and the Academy of American Poets Poem in Your Pocket Day Brochure, and has been widely anthologized including in Best Canadian Poetry. eleonoreschonmaier.com