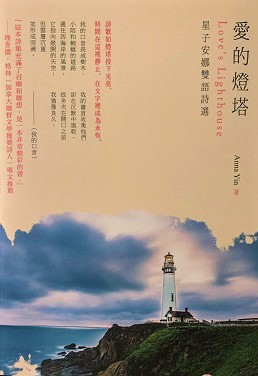 Anna Yin’s new book of poetry has exactly five English words on the cover – her name, the title, Love’s Lighthouse, and the ISBN if you count that as a word. It is, however, covered in Chinese characters in red and black placed in both vertical and horizontal columns, to lovely effect. This element is repeated throughout the book, 60 poems presented first in Mandarin and then in English. Nicely produced, Love’s Lighthouse is a pleasing book to look through and handle.

There’s a welcoming sense of being ‘let in’ in Love’s Lighthouse. This warm collection of Anna Yin’s Chinese poetry, paired with her English versions, is rich with visual, cultural and personal intimations. All the poems were written and translated by her, some in English first, others in Chinese. Thus we have an engaging introduction to two ways of thinking about language and poetry, through the perceptions and memories of one person who has been immersed in both.

There is a clear narrative here: memories of Hunan China, which she left twenty years ago to come to Canada; the slow death of a beloved sister, which drew her back to China; the passing of the seasons and the beauties of nature; and of course, the courses and many forms of love. But the story element is not overworked. There is a lightness of touch throughout, gaps between moments, facts, and words left unexplained – but not frustratingly so. And a dreaming intimacy yet distance that draws the reader immediately into the core and voice of the poem, but with a considering mind. For English Canadian readers like me, we become the person treading these faraway paths, speaking these words, and referring to these myths and histories in a language much more ancient than that spoken by us. In what may be a suspension of Canlit values for a different cultural stance (I stand ready to be corrected), many poems reference such well known figures as Van Gogh, Leonard Cohen, Octavio Paz, Ted Hughes, Gwendolyn McEwen, Marty Gervais, Iris Chang, Margaret Atwood, and Yeats in a quiet, direct voice that brings them right into the conversation. The book is clearly meant more for Chinese readers than English ones, but I am glad of the generosity that has prompted this poetic meeting.

I’ve known Anna Yin for some time, and watched with pleasure her work develop as she’s explored the techniques, limits and strengths of Canadian poetry. Her early poems, in my memory, spoke lyrically of a strong and empathetic heart and a wide viewpoint, but sometimes stumbled on matters of syntax, reference and style. That was a decade ago. In this large and confident volume, 220 bilingual pages, the overweening impression is of an intense, thoughtful, perceptive and lyrical mind and heart fully engaged in the world and all its elements. There are still occasional missteps to a pedant’s ear, such as “not for increasing its value” instead of the lighter “not to increase its value.” At times her imagery and word choices verge on the expected and my editor’s mind wants to get out the red pencil and strike out awkward or lax phrases so that the stronger ones like, “I catch my own shadow / too heavy to lift.” can sing. I don’t know if these mild missteps are caused by the problems of rendition in two languages and different poetic traditions. Evocative contradictions like the above, and surprising but gentle turns like moves in a dance are, however, a mark of the collection. Often placed as finishing lines, they leave the reader with a sense of expansion, beauty, and worth.

And the above minor problems are about the worst thing I can find to comment on! Reviewers are meant to cast a critical and judgmental eye on their subjects, but I’ve been charmed by the music and understated implications of Anna Yin’s words, by the intricate trellises of Chinese graphics that adorn the pages, and above all, by the warm, open, celebratory heart of the writer. I like this book. I bet you will too.

About the reviewer: Susan McMaster’s publications include books, anthologies, and scripts, recordings, and collaborations with artists, dancers, dramatists, and composers. Recent collections are Haunt and Lizard Love: Artists Scan Poems. She is the founding editor of Canada’s first feminist magazine, Branching Out, and of Vernissage, the magazine of the National Gallery of Canada.  She is a past president of the League of Canadian Poets. Visit Susan’s website