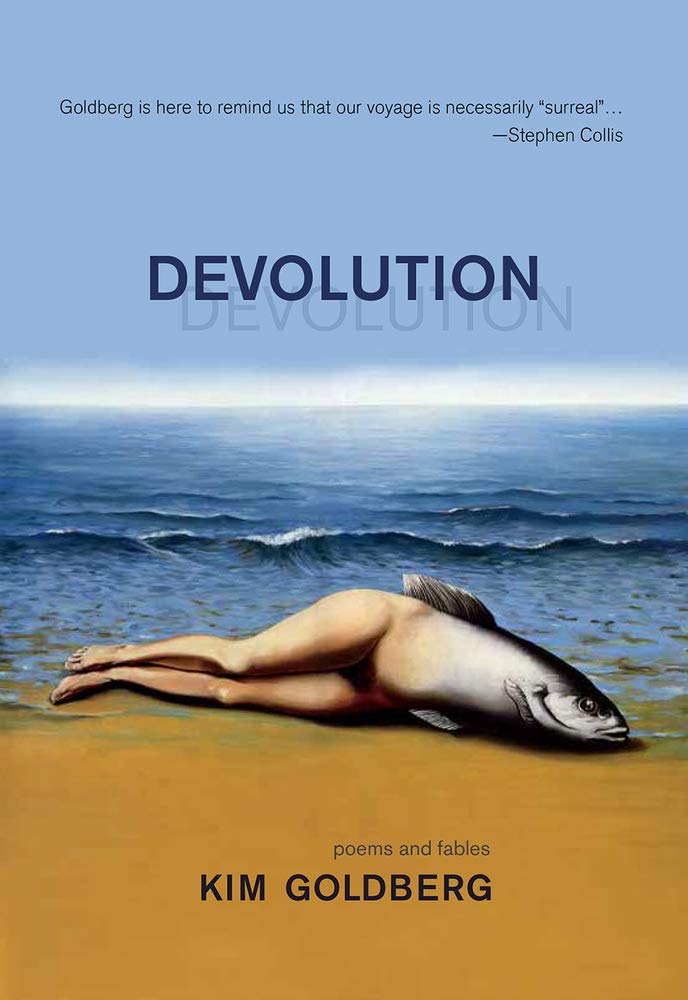 Kim Goldberg writes surrealistic poetry that sometimes incorporates formal poetic forms. Many of the 60 poems in this collection use animals or anthropomorphic beings to convey their frequently apocalyptic messages. Shifts from the concrete to the abstract often startle the reader. You will not find cliches in this collection, and should one occur, it is put to good linguistic use. The author conveys her particular concerns for the environment in many of the poems, many rendered in sarcastic tones that also convey her political slant.

I doubt there are two ways to read her poem “35 Years.” This is Goldberg’s tribute to Chelsea Manning, in which she nearly, but not quite, expresses appreciation of “the truth” leaking out. She shows how Manning, as former U.S. Army soldier and intelligence analyst in the Iraq war, offered his “vision,” from the cockpit of an Apache helicopter, of what American troops did to Baghdad civilians.

Whatever one’s political viewpoint, the reader must acknowledge Goldberg’s syntactical skills. In her imaginative poems, the landscape often shifts under our feet as the poet presents her themes.

Many, such as “Escape from Cyberia,” are entertaining in their irony. In this prose poem she writes, “The [Syrian] families were tossed out onto the desert.. became wild horses stampeding down the beach to escape the long-tail keywords pursuing them. (Everyone knows horses are afraid of long-tail keywords.) The sharp report of their hooves sounded like machine gun fire…” (p.41)

In her clever “Constant Comment,” Goldberg pictures a hobo’s appearance in her cup of tea, the teabag his life raft, as he “blathers” (her word) about things like climate change. “My therapist says these are projections of my Inner Dialogue with my Angry Fractal Self,” she writes.

“When spiders dream,” a skillful villanelle, makes us uncomfortable with its biting lines. Stanza 2 reads:

stump remains when tree is gone

Again, in “Twilight on Esplanade Street,” Goldberg mixes creatures with her salty linguistic sarcasm to deliver her ecological message, the abstract and concrete again blended in to her unrhymed tercets:

whispers of vanished bivalves, a recollection

of sea gooseberries before they fell from their constellations,

of migratory geese ripping at the seams,

wildness of languages left behind

As I read through this volume, my appreciation for Goldberg’s concern for the environment and her skillful ways of portraying the issues grew. “False Economy” presents her theme as a fable. (Pp.70-72) In this story, the persona takes on the spots of a deer beside which she lies in the night. Soon all of the deer disappear and tarpans enter the story. But the tide rolls in “lofting their coarse bodies skyward, each attached to its muck-sunk rock by a stalk of thick neck.” The narrator asks, “Was I responsible for all this? The loss of the last known tarpans and trees and ex-pat fallow deer?” Then answers, “I had only wanted to stay warm. Time to boot up the laptop and compose another poem.” Her use of the German phrase “it is darkening” throughout the story, gives eloquent expression to the loss of species the poet is describing. The great exchange in this story comes in the eighth paragraph:

enough spots to purchase all the garments and coordinating accessories and

Cuisinart appliances I needed (plus some I didn’t.)

That final phrase “plus some I didn’t” again buffets the irony with which Goldberg so adeptly strikes. This volume teaches new ecological awareness. Its lively surrealistic language keeps us alert as we ponder her important message.

Goldberg is the recipient of a British Columbia Arts Council grant. She is the author of eight books of poetry and nonfiction and resides in Nanaimo, British Columbia. She holds a degree in biology. Formerly she covered environmental issues as a freelance journalist.

Carole Mertz, poet and essayist, reviews regularly for Mom Egg Review, South 85 Journal, Dreamers Creative Writing, and Eclectica. Her reviews have also appeared in Arc, The Compulsive Reader, The Bangalore Review, and World Literature Today. Mertz is the author of the Poetry chapbook Toward a Peeping Sunrise (Prolific Press) and the 2020 collection Color and Line (forthcoming from Kelsay Books.) Carole resides with her husband in Parma, Ohio.