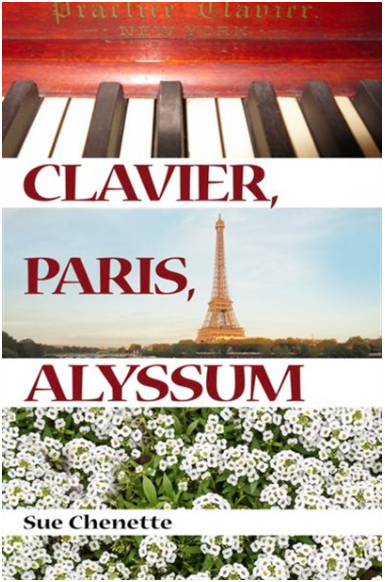 I must have been feeling a bit rebellious the morning I picked up Sue Chenette’s recent collection Clavier, Paris, Alyssum, and, reading out of order (shocking!), began with the central section: Paris. Mainly because I saw it was the shortest of the book’s three sections, a mere thirteen pages. Good, I thought, I’ll be able to check this out before the dog gets antsy for her walk.

I was wrong. Whether the dog got antsy sooner because we’d slept in after staying up late to see the answer to the question: how long does it take conservatives to extract leadership ballots from torn envelopes? (A sentence I suppose I shouldn’t be surprised to write considering how fraught even the simplest tasks have become in these times of Trump, crises of COVID.) Or was it because I got sucked in and slowed down by Chenette’s seductive poetry and spent more time reading each work. We’ll never know.

The epigraph which fronts the Paris section should have warned me – the one about Paris being “loath to surrender itself to people who are in a hurry.” Tell it to my dog.

Anyway, I read the first poem, ‘Charles-Louis Clérisseau Defends His Architectural Fantasy; and I Respond’ and thought ‘Oh, goody! History as well as geography’, with the poet’s brief gentle ending softening those two dryer subjects.

With her, we get to witness great works of art. In ‘Lalique’s Poppies’ Chenette traces the construction of a brooch from the artist lying in a field of poppies to the final “Burnishing / is not quite yet / relinquishing”. At the beginning of ‘Modigliani’s The Servant Girl, we aren’t quite sure whether it’s the poet viewing the painting, noting the floor’s “red clay tiles I could drag a mop over.” who’s speaking. Halfway through we understand it’s the servant girl herself, and so the poem becomes humble, not so much about great artistry but “about my hands, so large / and red against my black dress – / rough indeed from work.”

‘In the Métro’ is different. Broken phrases mimic the energy of a subway performer, his barking dog and an enthusiastic listener who dances along. “spate of throated bark and ache / stipple the strings flung / fingers shock a rhythm”. This poem begs to be spoken aloud. So I did.

I liked the next poem ‘For John Kliphan’ very much, but at this point the sun came out and the patient dog lifted her head from the couch and gave me a look. So off we went. On our return, as I read the poem, the last lines resonated with me. (I love a good elegy and this one was clear and direct, could have been read as a eulogy.) “If there is / an afterworld, may the dark / you enter there be only // that which turns around / to light, as your words turn me, / here, this morning.”

‘The Terrace at Café Rouge’ returns to the choppy rhythms of ‘In the Métro’ with the addition of assonance in the use of the vowel ‘o.’ As the poet or someone orders a drink on the terrace –  “a laughing order” – we are brought to the line “the float of vocables” and (shaped like a pot-bellied bottle) the words “round as orangina”. Then Chenette emphasizes her o-centred word play in the last line. “O & O & O”. Fun!

Though short, this section of the book was deep and gave me a lot of pleasure. I’ll content myself with discussing two more of its poems. ‘at night’, two blocks of text sideways on the page, is well-constructed to be read in either of the two possible ways. The block on the left is an exterior scene; the one on the right interior. But the outside verse narrows to one person’s moment while eventually, the inside person looks out at the sky. Brilliant!

In the same form is ‘In my suitcase, carried home from Paris’, but in this case (sorry!) I’m pretty sure we’re meant to read down the left hand column which lists all the mundane physical objects we would expect, and finish with the right, where the poet remembers “untaken photos”, sounds and feelings.

Reading Chenette’s biography, I knew she was a musician. So when in the first section of her book, Clavier, poems discussing things musical appeared, I was unsurprised. Here are images of the poet playing the practice keyboard, the clavier, evenings at her campsite, to the bemusement of passing fellow-campers; of listening to a clarinetist practicing (“Sound silky as / a cool ripe pear”; an elegy for a deceased music teacher; a ballad of love lost (“Chose / three sharp stones for remembrance.”); and others. I particularly enjoyed ‘The Music Books at the Back of the Cabinet’ for the musician’s heart breaking as she lifts old mouldering books “into a sturdy carton marked Goodwill / their voices just / barely audible / beneath the gently-fitted lid.” Yes: why am I still holding on to my original John Thompson piano method books from the 1960s? And I laughed at ‘Especially in Winter’, as the piano teacher, weary of “one child following another, the weight / of their progress or lack of progress carried / from half hour to half hour …coaxing …cajoling” – you get the idea – thankfully enters her cold car and departs on the drive home, presumably, radio not playing, in restful silence. Been there, done that.

Many of the poems in Clavier are not related to music directly, but that doesn’t mean they aren’t musical. Take ‘The Train on All Saints Day’. It’s as if the poet is listing all the things seen along the way, and asks the reader, if the real can be measured, “could you tell me / just where I am / along this mortal track / beneath a sweep of sky?”

Perhaps on a similar voyage in ‘Ship Rex’, she reflects on how foolish we are in the face of disaster. How “all our shipwrecks, maybe each / a teacher king, Ship Rex, we’re meant / to bow and learn.” And perhaps Chenette is learning a lesson of letting go in ‘The Lifted Ship’ in which a beloved model ship, emblematic of a marriage, proves fragile and must be mended and re-glued over the years, before finally falling apart and going into the garbage. (Sigh.)

So, because I could, when I got to the third and longest section of the book – Alyssum – I headed straight to its title poem, wondering: if Clavier had been about music and Paris about, well, Paris, was Alyssum going to be about plants? And found in ‘Alyssum’ a discussion held by a brain with itself about the body it rides around in. Line one: “What if the body is a mute creature?” The alyssum comes in at the end of the poem and I inferred that the body, like alyssum, an annual flower, offers itself for as long as it can. What a nice way to look at mortality! Then my brain, asserted its liking for order and returned me to the beginning of this last part of the book.

Flowers certainly make an appearance in some of the subsequent poems, mainly as consolers. The planting of daffodil bulbs (‘Needed To Plant Daffodils. Weather Channel Predicting Frost.’), long postponed, offers the solace of kneeling in the garden when the task is finally addressed. In ‘Morning’, waking fearful, she notices: “Chocolate is useful. Also crimson zinnias.” Amen. In ‘Weeding, Late Summer’ when she is trying to repair relations with her mother by gardening together, it can’t be done without destroying what they have now. “Nothing for it // but to leave old stubble / and roots.” And then she brings in “late summer asters, purple fringe”, purple the colour of mourning.

She shifts emphasis slightly by taking up the subject of sewing. But the plants are still there. Fabric, after all, is or was, mostly made from their fibres. ‘Holes’ presents the poet looking for darning wool in a craft shop and feeling “the weight of all that won’t be mended.” ‘Stitched into Muslin’ is about the company of women, reading together in winter, probably, as “the dormant huddled buds, stitched / into grey muslin” “define the sky”. There is rich imagery as she describes three voices. (It helps to know that Dufy refers to a painter. I had to look him up.) “one / a Dufy, opened, light / between the pines; one voice / slate-streaked, / one orange – from Creamsicle / to lanterns in a dried bouquet.” And in ‘Requital’ the questions about mending clothing could be about the process of creating a new relationship – “Who will darn my torn cotton” – or new writing – “Will I bleach my stained muslin / in bitter herbs” – until, in the last verse, we find that the answer is no one and nothing is coming. “You will neither be requited / nor acquitted / only quieted / by the murmur of rain / falling to green lawn / its nap of weeds, bald shade.” I loved this poem. I loved this book.

Sue Chenette, a classical pianist as well as a poet, grew up in northern Wisconsin and has made her home in Toronto, Canada, since 1972. She is an editor for Brick Books, and the author of Slender Human Weight (Guernica Editions, 2009) and The Bones of His Being (Guernica Editions, 2012).