Review of The Way History Dries by Keith Inman

Reviewed by John B. Lee

“Than longen folk to goon on pilgrimages,

Lines from ‘The General Prologue” to Canterbury Tales  Geoffrey Chaucer 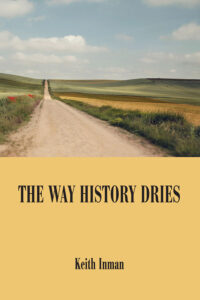 I first met poet Keith Inman in Cuba.  My impression of him was that of a soft-spoken man of high intelligence.  By that time he was a retired factory worker dedicating himself to the craft of poetry.  In his biography he speaks of a mentor encouraging him to “get that flowery shit” out of his writing and to dedicate himself to writing in a “blue-collar style.”  And he has had some considerable success since the occasion of that meeting, The Way History Dries being his sixth book of poems.  And he has become one of the premier practitioners of what Canadian literary circles call Peoples’ Poetry.

In this book of poems he tells the story of several Canadians walking the famous trail Camino-Frances, from their setting out to their arrival at their intended destination.  In his epigram he unveils his commitment to the role of the poet as that of dispassionate observer.  He quotes Andrew McMillan “The poet’s job is to ‘observe, to contemplate, to bear witness.’”  And most interestingly he is absent from the story.  He chooses four characters through whose eyes he relates the experiences of walking the Camino.  They are Father Fred, a priest whose express purpose is to find a place to spread his daughter’s ashes, and for travelling companions, self-confessed atheist Harv, Harv’s wife Anne and their friend Barb.  It is through the eyes of these pilgrims that we experience everything along the way.

In considering such a journey in the reading of this literary tour de force, I ask myself  how much of where you are, where you’re going, and where you’re about to be depends upon the ‘you’ in the doing and the being, and how much of your experience depends upon your whereabouts and your whenabouts.  And how much of who you are depends upon who you are with.  The journey of the body on a spiritual quest involves the self, the soul, questions of the nature of faith, and the sensibility presented in studied attentiveness going for a walk, a trek, a hike, a pilgrimage, companionable and solitary.  The journey along the Camino made into a previously unfamiliar landscape that promises inner transformation along with the consequence of accidental encounters.

Where Keith Inman’s filter comes into play involves the presence of irony giving the reader a reliable glimpse into the truth of disappointed expectations that in his case avoid the honey trap of cynicism.  These relatively well-healed travelers set out in hiker’s gear.  They enter a landscape in search of a bed to sleep on to soothe their fatigue and a restaurant meal to satisfy their hunger at the end of every day.  There is beer and wine and good food, and the good cheer of meeting up with Ausies, Brits, Americans, and mendicants and merchants.  One typical observation occurs in a poem close to the middle of the book, “They found the restaurant/ behind a laurel hedge.” (from “the Book of Nature Mentions Humans Twice).  In “Laundry” one trekker opines “What I really need is an American bank.”  After all, this pilgrimage of necessity is something of a credit-card journey, and these pilgrims are sometimes ‘spiritual tourists.’   But to Inman’s credit, although he acknowledges this irony of the ‘forced enlightenment’, he never judges his characters.  At one point, and this is not an expression of disappointment but rather a celebration of the beauty of small truths, he writes “The coffee was good and morning/ bright/ with a cool breeze of birds/ talking/ about the day.”  In heartbreaking simplicity Inman writes of these pilgrims “their pilgrimage carrying them/ inside the mountain/ of their hearts/ a journey among saints/ looking for a place/ of craftsmen.

In the end, Inman’s genius involves putting irony to a deeper purpose.  So often irony loops back on the subject of cosmic ridicule and thereby puts us all in our place.  We are ridiculous as Lear who sees us “as flies to wanton boys are we to the gods.”  No.  To Inman we may fall short, but in the end this is a book of affirmation.  “… sure his people once danced/ before fire, threw spirits in the air,/ drew water, chopped wood, ate, drank,/ slept, wore animal skins, made hours for work,’ tools for gardens, instructed, constructed,/ made music, rainbows and children/ like anyone full of rain.”  (Tending the Flowers of Tyrants).    Pilgrim Anne raises a glass in celebration “We did it. We/ did it!”  And the exclamation mark is not ironic.  The ‘it’ of the doing is genuine and deeply felt.  And the last act of the final poem involves a pseudo-sacramental gesture “slicing a tender medallion of braised/ boar with apricot jus de jour.”  In the closing lines of another book telling the story of pilgrims, Chaucer concludes “And as we diden, lat us laughe and pleye/ Anon they kiste and ryden forth hir weye.”

Poet Laureate of the city of Brantford in perpetuity