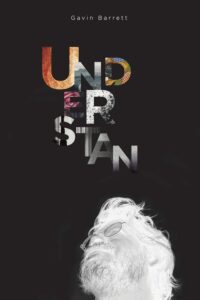 Gavin Barrett lives a life with many layers of creativity. Much of his service to poetry is organizational, such as in curating the Tartan Turban Secret Readings, a series which prides itself on diversity and providing opportunity to visible minorities. However, his writing has also garnered suitable attention, and Mawenzi House released his first full collection, Understan, in June of 2020.

His poem “Flare, corona” is not about the virus, despite the book’s release in the middle of the pandemic. The poem, instead, refers to the origin of the word corona, and its relationship to the sun: “Close out/the light in a squint/and shards of colour/kaleidoscope through eyes./Imprism me.” A few lines later, Barrett echoes this unique turn of phrase with the more expected, “…imprison me.” Along with depictions of the tides and how they are affected by the sun, these contrasted words bring a sort of coherence to the piece through a filtered lens.

“The kiss” is a more traditional form with several stanza breaks, each ending in a full stop. From the first line, “My father kissed my mother’s face where we stood inside her tomb,” the reader feels the still solidarity of a funeral party. “The walls of the grave were thick stone six feet deep./We four were sick, the stone rang with grief./Nothing was the same.” Even in death, the female is the protagonist of the poem. This is a common theme in Barrett’s work.

One of the shortest pieces in the book is “Two buses”. “One: eight Nigerian women, high-headed taffeta,/white teeth going to a revival. Singing.//Two: twelve minstrel Sikhs. Beards twined to sidelocks./A boy hating his reflection in the window.” On first glance, it seems to be a very simple, vivid piece, unburdened by moral dilemna. But it actually depicts a commonality, a unity, between two groups of people moving in seemingly disparate worlds aside from being on different buses.

“Pickering” tells of a father taking his daughters on a day trip to Petticoat Creek Conservation Area, located on the outskirts of the growing titled city, set on the fringe of the Toronto megacity. It is unspoilt land, an oasis away from the condominiums and shopping malls of suburbia, yet only a few miles from the infamous nuclear power plant for which Pickering is best known.

Barrett alludes to the power plant when he mentions the “seventeen giant cooling towers”, but most of the poem depicts the unique vegeration, the paths and bluffs and creeks and the lake, which demarcate the wonderful, peaceful beauty of this spot. Such is the irony of Ajax, Pickering, and my beloved Scarborough, on which Pickering borders.

“Handy woman” is a brilliant poem with the female as protagonist: “She was a carpenter/I helped”. The reader is shown in detail how these two “sweated/zipper-sawed/tumbled up” through their labours, yet we want to be with them, part of this journey. Barrett clearly views women as heroic, multi-faceted, admirable for much more than their beauty. “She lay down and measured bed lengths with her body”. Here the poet helps the reader to see a situation in a way they hadn’t considered before. With this greater appreciation of reality, we have a greater appreciation of ourselves. We are transformed, liberated, by this fresh perspective. Such is what excellent poetry does.

“Ten thousand thoughts on love” was undoubetdly inspired by Barrett’s wife Leah, to whom he dedicated this book. “When we lie in bed, the flowers on the window sill/hold their breath and shake with desire.” But, we are told of a fuller, more well-rounded celebration of love: “In the nights when the lightning strikes/they hold each other, not from fear but hope.” We also see the less sublime but just as essential: “They sat at the table to eat with their children/but became bitter as they drank with their parents.” And then, humour: “He lay in the sand with her, passionate and then indolent./Years later, they still found grit in their salad.”

I don’t usually enjoy long poems, but I found myself wishing there had been space for 10,000 of Barrett’s marvelous thoughts.

“Dream in a train, of a library” reminded me of the classic post-modern poem “Evening Train”, probably because I have been studying Levertov of late. Of course, it also ties into Barrett’s poem “Two Buses”, mentioned previously. Public transit, or passenger travel of any sort, allows unique opportunities to observe whatever is around you, as well as internal images which are not immediate, or even apparently transferable to this experience.

The poem ends with a stanza evocative of “Flare, corona”:

what once were visions are now flashes

of an evening’s soft-lit sky–

as dreams begin, they die.”

The final poem of this book is the poignant “My father the sailor, in his 80s”. It begins with the line, “I see you as you are now,” a phrase which is repeated near the end. It is a remarkable experience to see one’s aged father, not as the hero-antagonist of one’s youth, but as a human being who has apparently grown and changed. Despite a lifetime’s worth of differences, the son gives his father a medicinal injection. Their relationship has grown and changed.

There are many startling and unique turns of phrase in this piece. My favourite is at the end:

“You want to go home,

and you are home

and you have left home

and you are going home.”

Gavin Barrett is a quintessential Canadian story. Born in India, eventually settled here. Excels in everything with which he is involved. Co-founder of an award winning ad agency. Provider of creative outlets for others before himself. Although this book was several decades in the making, I believe his poetic dream is just beginning.

Gavin Barrett was born in Bombay and lived in Hong Kong for several years before immigrating to Canada with his wife and daughters. His poetry has been published in India and Canada. He lives in Toronto.

Pat Connors first chapbook of poetry, Scarborough Songs, was released by Lyricalmyrical Press in 2013, and charted on the Toronto Poetry Map.
His poetry reviews have been published as far away as Belgium, as well as in Canada. His first full manuscript, The Other Life, is about to be published by Mosaic Press.