Review of Forty-One Pages: On Poetry, Language and Wilderness by John Steffler 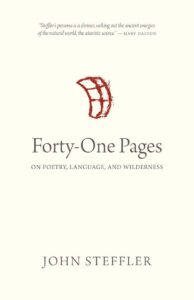 In his latest book, Forty-One Pages: On Poetry, Language and Wilderness, a collection of forty-one anecdotal essays and a handful of poems, John Steffler defies you to draw a dividing line between poetry and prose, language and wilderness, mind and the page. And he invites you to dwell in that space where they blur. “This is a page,” he says, and I imagine him touching his head or his heart, be it blank, the wall of a cave, or a clearing in the woods, “this inside place stands for all that’s outside.” Therein lies the overarching premise of this compelling little book that reads like a manual for being human, a guidebook for navigating the back of our heads, for filling in the gaps between words.

“Poetry is driven by honesty,” writes Steffler, and in the next sentence, “… words can become tame, attenuated and anaemic, poetry wants to restore their animal energy.” That’s on the page he calls “Entrance” where you’ll also find this beautifully worded tautology: “Language is always the expression of living creatures.” By that he means language comes to life when it echoes on, when it lingers even after those who spoke or wrote the words have died and how it now resonates with “the past in the minds of the living.” Poets tap into this power of language to be always present, always connected, always communing.

Mystery. What Steffler says about mystery is worth the price of admission. A key feature of our “personhood,” as he puts it, “is the right to autonomy, privacy, and mystery.” In other words, the right to keep to ourselves what we choose to keep to ourselves. Poetry, he argues, is a revelation of that mystery: what ends up as a poem on the page is what was once within. However, he wonders, of what significance is that mystery, the one preserved in the self, if the “general mystery of how a culture can claim to revere human life” is disregarded and its responsibility to the nonhuman universe minimized? Does the poet have a role to play in redressing this imbalance? Of facing that mystery? Irony has a way of detaching the poet from commitment; cynicism of turning one’s back on action. Sentimentality too often weakens the power of narrative or of the lyric, and the broken line can emerge out of conflict as much as from harmony. But the point Steffler makes is that it is “the idea of respect for the life, the inner being, of a creature or thing, the idea of its inherent right to its undisturbed mystery that is significant.” Then read his poem “Since Life Values Nothing Higher Than Life” for the muscle of language and image it flexes.

Wilderness and language. He writes from within on the woodland page outside his screenhouse. Just like an animal is integral to nature and nature integral to that animal, Steffler is joined to language. It’s a body he lives in. He is most alive, he tells us, in the act of writing. “Wilderness,” he writes, “is what I want to leave alone and what I want to explore.”

Nature is a “wordless experience.” Being a poet involves living in two worlds as a kind of messenger or translator, at home in the language of nature, an ear to the ground and one on the page. I’d climb a mountain with John Steffler, if only to hear him talk like that all the way to the summit. I spent this past summer praising, observing, writing about the magnificent daylily for its profusion and as a wonder of nature. I suppose I’m a nature poet at heart. So is Steffler, a nature poet who gets political. Who wrestles with the cultural and socio-political implications of the English language and its colonial past. Who is fundamentally Canadian, boreal and non-Indigenous. Who wants to do right by the Akwesasne people on whose page he writes. Who embraces wilderness and its non-verbal language.

This is a book about waiting for the right words to come. And about waiting for something to break. Such as silence, because silence is needed for the birth of a song or a poem. This is something Steffler learns from Knud Rasmussen, the Danish explorer and anthropologist, who learned it from the Inuit of Alaska. This is a book about language in the language of a poet. And in that of an explorer.

Did I mention it is also a book about wilderness? And about the back of our heads which is “like the back of the moon, … wide open, a missing wall.” The world outside our heads, he claims, is the greater part of our minds and “most of [our] best ideas come from there like deer – or wolves – emerging from the forest’s edge.” I live by the forest’s edge. I know what he means. I’ve seen the deer saunter across the page. I live by the poetry and language of the forest. By the shadows it keeps to itself. Steffler puts into words a passion for thinking, for feeling, for getting lost in the woods. A passion for going in and out of the shadows.

Steffler is a deep dweller. He plumbs the depths of emotions, tells us the self is no more and no less than an organism recoiling in fear of the unknown or leaping with irresistible attraction towards the familiar. And that it’s corollary is also true. He says, “perhaps emotion is the oldest knowledge.” Instinctive knowledge, he calls it. And instinctively I know what makes a poem a poem and how the exuberance of language ends up on the page. Forty-one pages, in Steffler’s case. Forty-one “colour-thoughts.” Wild, emotional knowledge. Therein lies “our deepest registry,” he says. Poets go there, into the wilderness, and come back restored. Rejuvenated. In his own words, “emotions are the whole body working as mind.” I can live with that.

Poets are mad. They have to be to put emotional knowledge and language to use on the very same page. The results can be surprisingly unpredictable and terribly surprising. But poets are freed by the page since “the page can offer a taste of wilderness, a semblance of what it is, without going outside.”

Ultimately, this is a book about the raw experience of writing and of one writer’s experience with writing. It is about language and wilderness and how they merge on the page. It is also about being human, in a mindful way. As I burrowed deeper and deeper into this book, these meditations became my meditations and, thanks to Steffler, I recognized in a very fundamental way that what makes me a poet is what makes me human.

John Steffler is the author of six books of poetry, including The Grey Islands, That Night We Were Ravenous, and Lookout, which was shorlisted for the Griffin Prize. His novel The Afterlife of George Cartwright won the Smithbooks/Books in Canada First Novel Award and the Thomas Raddall Atlantic Fiction Award. From 2006 to 2009 he was Parliamentary Poet Laureate of Canada. John lives in Winnipeg, MB.

Antony Di Nardo is the author of five books of poetry, most recently, GONE MISSNG (Hidden Brook Press), which was released in 2020. His long poem “May June July” was winner of the Gwendolyn MacEwen Poetry Prize for 2017 and was nominated for a National Magazine Award. His other books are SKYLIGHT (Ronsdale Press), Roaming Charges (Brick Books), Alien, Correspondent (Brick Books) and Soul on Standby (Exile Editions). His work appears in various anthologies, has been translated into several languages, and can be found in journals across Canada and internationally. Born in Montreal, he divides his time between Cobourg, Ontario and Sutton, Quebec.