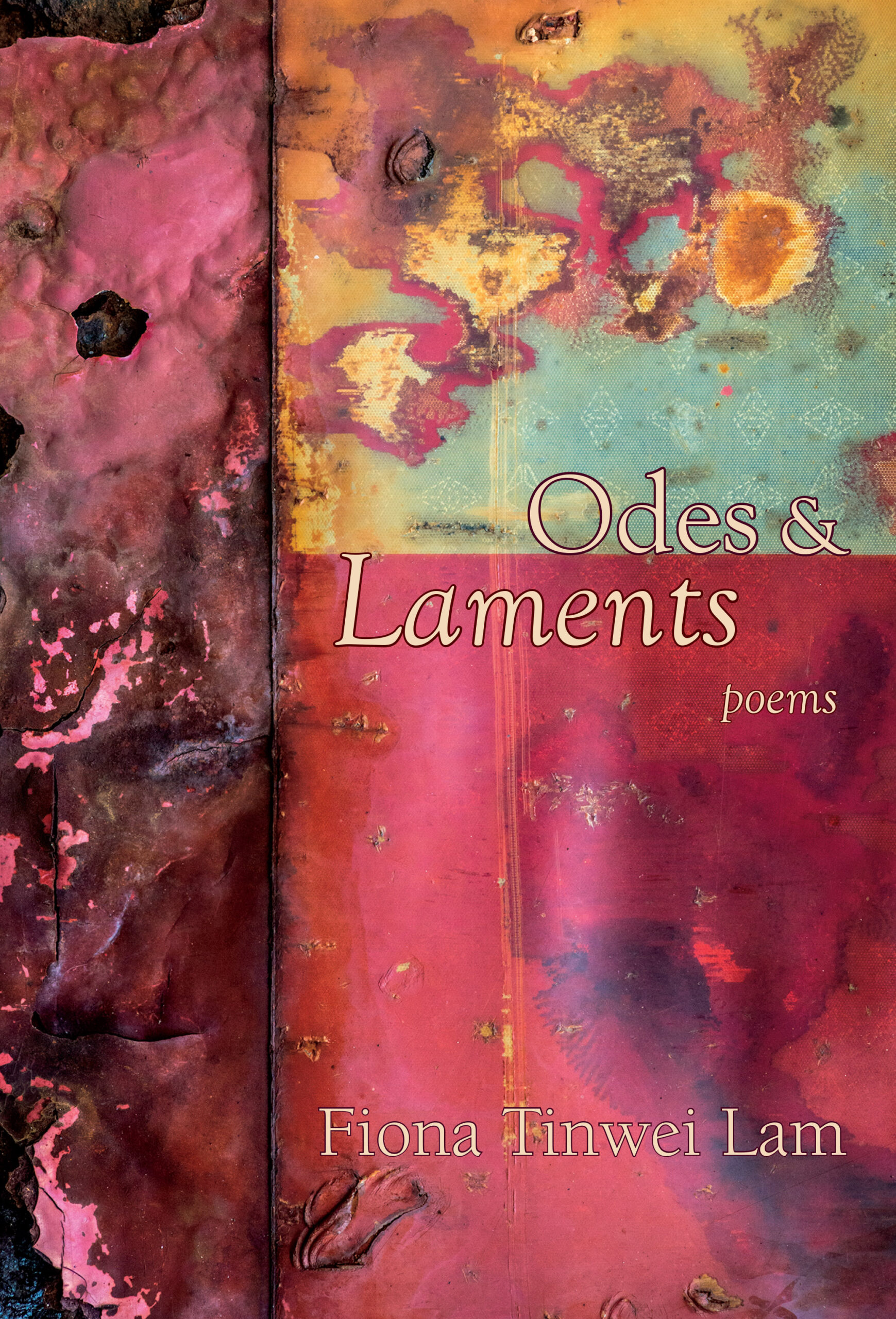 Lam’s third poetry collection, Odes and Laments, surprisingly sweet, offers an equal measure of elegies and odes, sometimes in the same poem.  The opener, “Libation,” concludes, “What’s held within/this cup, this poem, this juice/I offer you.”  The poem could be container or contents, and what does it matter?  Everything IS all apples and oranges, literally, with much about food, and figuratively, but part and parcel of the world, natural and not.  The reader is invited to par/take.

Family is viewed on a continuum of loving loss.  Affecting is “Pool,” with the disintegration of the childhood home, “overgrown shrubs shroud[ing] the house/as each of us left,” the cycle soon to repeat with the narrator herself now mother of a pulling-away “Sixteen”-year-old, who not long ago, with her brother, “rooting limbs,” sought physical comfort in her, the trio “one body in the forest” (“Shelter”).  Dramatic irony, subtlety in the verb tenses, and biophilia add to the heartbreak.

A series of fun but disquieting concrete poems about plastics (one, “Plasticnic” oddly in an earlier section, misplaced or foreshadowing?) are, according to the notes,  part of an animated video poem, but are pleasing on the page.  The second of “Mountains,” especially intriguing, builds from a long list of names, “polypropylene,” yet another type of horrid plastic, as is “polytetrafluoroethylene.”  One must laugh and/or cry (apples and oranges).  The technically ambitious and thought-provoking “Dark Mirror” (palindrome poem series), which deconstructs computer screens, is vivid in these times of life on-line, and no escape.

Direct address to much, plates, starfish, a sparrow that crashed into glass, feet (very cunning), and streams, draw the reader in, as do poems about wolves, salmon, Canuck the crow (Vancouverites will be charmed). Food and drink are sprinkled throughout—apple and cider, orange and OJ, peach, rice, lemon, raspberry, milk, hospital food, cakes (such euphonious names). People are often evoked through close observation of daily items (soap, stop signs) attached to their users, “Chopsticks,” a loving portrait of her grandfather.

“Prescription” cleverly ties specific drugs— “Amoxicillin, cephalexin, ciprofloxacin–” to the particular animal or landscape lost when each is flushed down the drain: “sorrow’s past its due date. Unkilled, / pain.” “Utility pole” unmasks the species each had been when alive: “Only woodpeckers/ remember, drill you/ back into tree,” again combining love of language with reverence for nature. The exact verb choice (“trill, pecks, caws, thrums, hoots”) and unusual phraseology (“biophonic chorales”) of “Forest” induce writing to have the power for change: “let each poem be/ a fallen tree’s tongue.”

“Spectrum” is an outstanding sequence, often surprisingly funny (avoiding green smoothies after observing others’ bile production) and striking (meanings of “gutted”) about a one-month hospital stay.  Part vi, “yellow,” conjures the colour of sunlight after escape, about to be “home/free,” the last words so carefully placed (excellent line breaks and spacing).  The yellow, which given the subject, could have been sickly and jaundiced, has the glint of valuable gold.  There is hope.

Lam is clearly part of a community, the world at large. Her response to a poem “How to Praise the Mutilated World,” by Zagajewski, is a beautiful “Anti-Litany,” an attempt to find joy in an increasingly polluted, desecrated planet. She responds to visual art.  In “The Concert” about a Vermeer painting of the same name, she narrows in with probing attention on one musician (“you’d almost miss the lute player”):  “Absorbed, he blends into the music, his back to, audience irrelevant.” Her own attention to detail is so strong, she could be he, but she, enraged, engaged, never retreats from audience.

Near the book’s end, “Ghazal for Gestating Poems” outlines poetry as harsh, demanding work but ingeniously compulsive, and laments, “No one cares or buys.” The last poem, “Lost Stream,” concludes, “Deep underground/ you gurgle, chortle, ready to rise,” and this directly-addressed stream could as well be the formerly gestating Lam poem (or even poetry itself).

Let’s ensure the world remains praiseworthy.  Yes, suck back that offered libation, but not in a plastic cup, be kind to and connect with Nature, and most importantly, not only Lam but poets everywhere, heed her advice: “Stay bent over your poems.”

Recovering instructor Crystal Hurdle, after teaching English and Creative Writing at Capilano University (North Vancouver) for 35 years, is reinventing herself in retirement by practicing yoga (wimpily), cycling, jogging (badly—cyclists can pass her), weaving, and quilting. After decades of attending beginners dance classes, she’d like to move up to intermediate but doubts such will happen in this lifetime. A self-confessed Plath and Hughes addict, she developed and taught two courses (creative writing and literature) in which their work figured prominently. Sick Witch (2020) and After Ted & Sylvia (2003) were published by Ronsdale Press. Teacher’s Pets, a teen novel in verse, was published by Tightrope Books in 2014, and is part of the 2020 North Shore Authors’ Collection in the public library system. Her work, poetry and prose, has been published nationally and internationally. crystalhurdle.ca