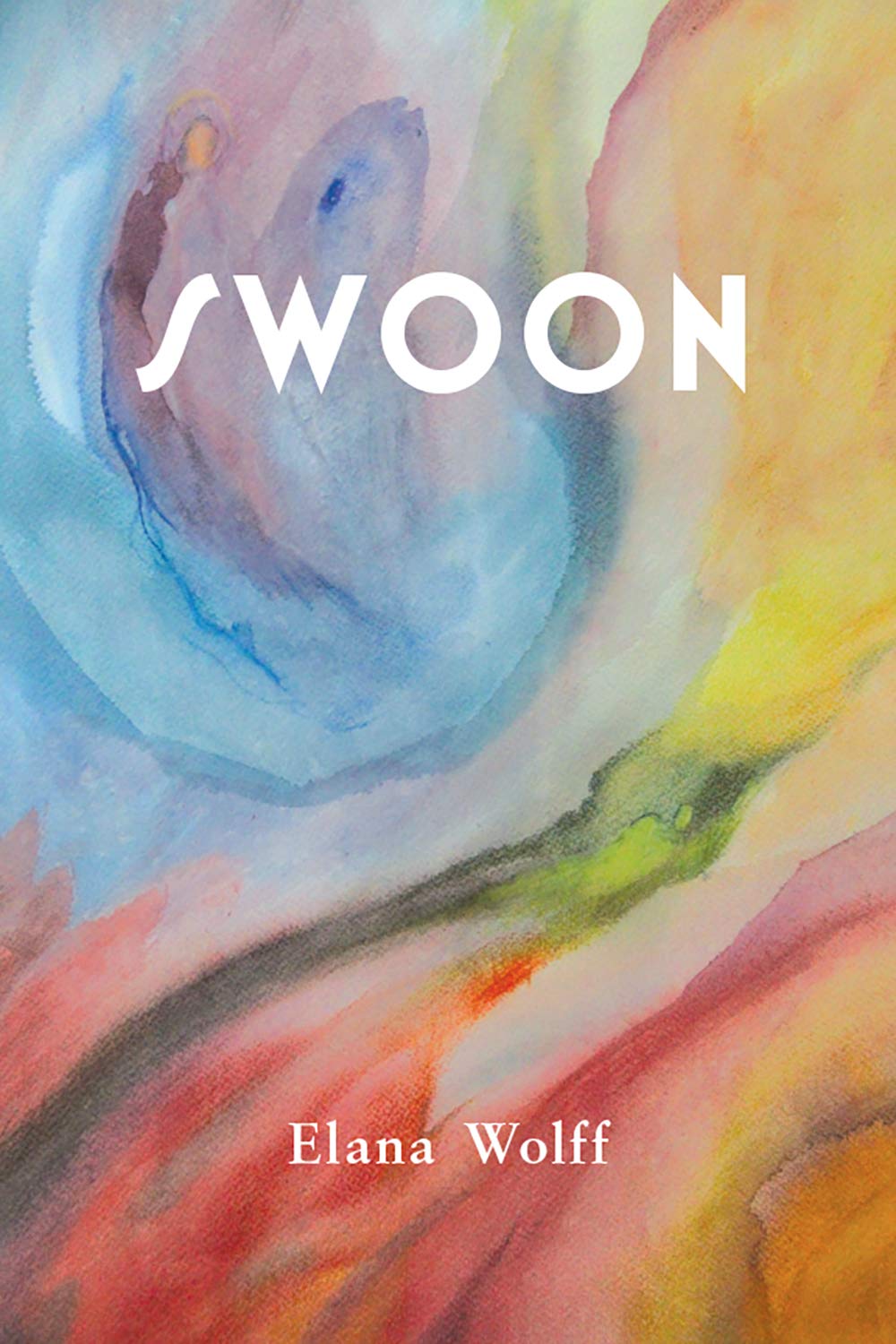 Elana Wolff explores the many layers of ecstasy and everyday-ness in her powerful collection of poems, Swoon. In her epigraphs, Wolff depicts swooning as the physical manifestation of an emotional moment in time, as in falling, fainting, “awakening,” a brief instant of “transformation”— as something spiritual — “swooning counts as believing.” Swooning allows for the swoon-er to make space, awaken, as witness to the immediacy of an instant. Her title poem gives an overall idea of some of the magic and themes in this moving collection; sun/rain, light/dark, birdcalls/human language, spiritual/earthly, the “Remarkable yet ordinary.”

There are no sections in this evocative book; it is a seamless and multi-layered poetic journey through art, travel, great writers’ words, bird sightings, strange images, memories, found meaning—often the infusing of the sacred with the mundane—where poet/narrator emerges as witness in wonder, present in each moment. The speaker reflects on silence and solitude, yet often yearns for union, understanding, even transcendence. Poet ponders the “Idea of isolation in support // of solidarity,” the “impulse … to save.”

Explorations include Bible allusions: the Flood, the Binding of Isaac, the silent name for God, as well as contemporary references—to the Golden Mile, a VIA Rail train car, a backyard or road beneath sneakers on a wire. There is paradoxical magic and tension in the natural world and the modern tech age, where speaker sees the marvels of modern travel, as well as the loss of innocence of the ancients, notes the fascinating variations in language and word meaning, as well as the frustration of communication barriers, and breakdowns: “still there’s grief,” … “at the crux of wonderment // & tech sophistication.”

This is beautifully apparent in “Messenger Suite” with its juxtaposition of poets’ ponderings in written words with the songs and sounds of birdcalls—the rook, with its “other tongue;” the goldfinch, “making space for quiet;” the sparrow, like the poet, uses its “other voice;” the loon, solitary, with its human-like “memory of dejection.”

Poet sees birds as mirroring humans in so many ways, as with the heron, whose authority has “none of the force that so often comes with power.” Poet / witness states simply to the gull, “I’m listening.”

The hyoid bone becomes a central image for the poet’s investigation of language and the meaning of sounds and lexemes. The hyoid bone, at the base of the tongue, is crucial for uttering of language, and so reminds us of the delicate and essential wishbone of a bird. “It’s the story of the hyoid to enable complex / human speech, its deft manipulations.”

These poems contain so much word play, even the sounds of “kerfuffle,” silken,” the “smack of bitter wind and rage;” even titles “Tumbrel,” Lunula;” and places— “Cairo,” Váňovský Pond,” “Mamilla Pool”—make reading these poems aloud a delight. Try these lines aloud: “Call it sense for survival, if you like, // I call it cunning: I like the femininity of that word, / its verbal noun-ness.” Delicious.

Wolff takes risks that soar, like “blessing the light // that blinds.” In her final poem there is salvation, epiphany, returning: “—I’m suggesting / Icarus wasn’t falling as he fell, / but splashing back to birth through earth and ocean.”

Elana Wolff has published six solo collections of poetry with Guernica Editions, including You Speak to Me in Trees, awarded the F.G. Bressani Prize for Poetry, and, most recently, Swoon, winner of the 2020 Canadian Jewish Literary Award for Poetry. She is also the author of Implicate Me, a collection of essays on contemporary poems; co-author with the late Malca Litovitz of Slow Dancing: Creativity and Illness (Duologue and Rengas); co-editor with Julie Roorda of Poet to Poet: Poems written to poets and the stories that inspired them; and co-translator with Menachem Wolff of Poems and Songs of Love by Georg by Mordechai Langer (from Hebrew), half of the joint volume, A Hunger Artist and Other Stories, by Franz Kafka, translated by Thor Polson (from German). A bilingual edition of Elana’s selected poems, Helleborus & Alchémille (Éditions du Noroît) was awarded the 2014 John Glassco Prize for Translation (translator: Stéphanie Roesler). Elana has taught English for Academic Purposes at York University in Toronto and at The Hebrew University in Jerusalem. She currently divides her professional time between writing poetry and creative nonfiction, literary editing, and designing and facilitating social art courses.

Kate Marshall Flaherty lives in Toronto with her husband and three children. She leads poetry sweatshops and writing-as-a-spiritual-practice workshops, leads meditation and mindfulness retreats, teaches yoga and is a founding member of the Children’s Peace Theatre Toronto. She celebrated the launch of her first book, entitled Tilted Equilibrium, May 2006, and launched her first CD, Deepening Stillness, in June 2006. She has read at Toronto’s Art Bar, Toronto WordStage, Hot Sauced Words and The Renaissance Conspiracy reading series and TOPS events. She has won several awards for her poetry, is published in a number of magazines and anthologies, and made the shortlist for both the Descant Winston Collins Best Canadian Poem 2006, and the Pablo Neruda Prize for Poetry 2006, and others. Kate won the Toronto Art Bar’s Poetry Slam 2005, and the Toronto Art Bar’s Poetry Sweatshop Contest in 2004. She has been filmed and interviewed for Bravo’s Heart of the Poet series twice in 2005 and 2006, and was interviewed by CBC’s Rosie Fernandez for “Words at large” as a new Random Acts of Poetry Poet. She has participated in The Banff Centre’s Writing With Style Program twice, and leads a Poetry Writing Workshop at University of Toronto’s Continuing Ed. SMC Campus. Poetry is her first love, and continues to be her life-line.