The Words Festival has been one of London ON’s liveliest cultural events, presented annually since 2014. But this year, “WordsFest.ca 2020 was presented online in the belief communities need the transformative power of the literary and creative arts now more than ever.”

Through Zoom, the event reached an online audience with an active chat section, so attendees could be involved in the moment. The conversation itself between Jane Munro in her Vancouver home, myself in my London home, and our host, Philip Glennie, felt more intimately engaged and less of a performance than when a large audience was present as in earlier years. Phil was at Museum London, with Word’s Artistic Director Joshua Lambier behind the scenes, managing the chat column. The recording of our conversation is now available for you to view. I am pleased to reminisce about the Zoom here in the Sage-ing Journal. 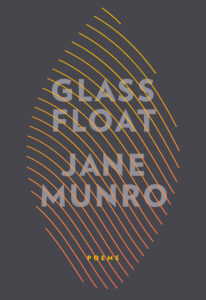 “Griffin Poetry Prize-winner Jane Munro returns with new poems that are spacious with interiority, alive with a hard-earned lightness. Waves carried a Glass Float—designed to hold up a fishing net—across the Pacific. Beached it safely. Someone’s breath is inside it. In Glass Float, Munro’s seventh collection, this award-winning poet considers the widening of horizons that border and shape our lives, the familiarity and mystery of conscious experience, and the deepening awareness that comes with a dedicated practice such as yoga. Glass Float is about connections: mind and body; self and others; physical and metaphysical; art and nature; west and east, north and south. In “Convexities,” the book’s opening poem, Munro quotes the grandfather who taught her to paint: “art is suggestion; art is not representation.” No concavities, he said. Only the “little hummocks” that her pencil outlined as she did contour drawings. Munro’s deft suggestion, her tracing of convexities, conveys underlying complexities, not by explication but by looking with eyes and heart open to where mysteries almost surface.”

I’ve met Jane several times and enjoyed her poetry for years. However, until reading her new book, Glass Float (Brick Books), I didn’t realize how our poetic and spiritual concerns mesh in the way we two approach the creative process of writing. It was fun to find so many parallels with another woman of the same era. She and I are both 76, born within a few months of one another. Jane and I are each poets, editors and educators; mothers (single mothers for a decade), and grandmothers.

Jane and I are of an age that in grade school we were presented with a glorious pink spread of Empire on the world map. As a child, I was proud to identify with that pink (read ‘white’ and imperial) identity. I didn’t recognize the colonial mentality that was drilled into us till much later. Jane has a poem in Glass Float that describes the same experience. Poems about shifting perceptions and letting go outdated concepts run through Jane’s GLASS FLOAT and my own RIVER REVERY. 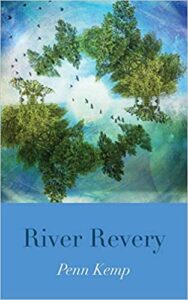 I found it intriguing to explore ideas with Jane and to discuss my own new book of poems, which is centred around London, Ontario’s Thames River. Rivers are often used in mythology to represent boundaries; to cross the river is to transform. The poems in River Revery reflect the river as it winds through the city. Because the Thames forks into two streams at the city’s core, it was called Askunessippi, “the antlered river,” by the area’s original Algonquin inhabitants. For Indigenous communities, it is Deshkan Ziibiing. In re-naming the river the Thames, English settlers colonized forbidding new territory as an imitation of ‘home,’ rather than embracing the vibrancy of the river as it is. A distillation of ecological concern is a current necessity in River Revery. Such inspiration in poetry is one source for right action since the Thames waters our gardens, real and imaginary.

Jane’s and my engagement with the natural world began as children. Growing up in the Fifties suburbs of BC and Ontario, we could wander freely in fields and woods without supervision: “Just be home for supper.” Another parallel in our backgrounds is that Jane’s grandfather and my father were both painters. That inherited visual sense informs our poems and our poetics. Both of us often start with imagery from dreams that we tracked for decades. Our writing allows for dreams to be recognized as parts of body/mind: dreams. But how to make dreams interesting to readers? How to translate the process, articulating a more conscious layer into a poem? These questions concern us both.

Such interests reflect the times we grew up in. Jane, for example, links my herbal poems to the Ayurvedic tradition in her own work. Spiritual searches have taken us to India: Jane, on intensive yoga retreats described in Glass Float, and myself on a Buddhist pilgrimage and as writer-in-residence. My adventures are written up in Sarasvati Scapes and Time Less Time, both published by Pendas Productions. Further explorations led Jane to Italy (Glass Float) and me to Egypt (Suite Ancient Egypt and Helwa!).

In the Zoom, Phil asked how our experiences in India shaped our writing and our lives. The trick in writing about travel is to avoid exoticizing what we see as difference. Both of us tried in the time abroad to be true to our own experience in meeting the “Other” and in realizing we are the “Other”. Jane’s poems describe assimilating separate selves, the forgotten or neglected parts which one can bring to a new wholeness. Travel allows us to do that as we meet the mirror of the “Other”. In India and Egypt, we met ancient cultures as well as contemporaneous chaos: we faced the discrepancy between modern noisy complexities and the huge breadth of 5,000 years of culture. I was struck by such vast spaciousness, stretching back aeons.

“Talking of spaciousness,” Phil asked. “Both of your poetry has been described as open-hearted. Do you see your poetry in this way?”

I noted that we both, by coincidence, were wearing red-ribbed sweaters, ventricles of the heart. “It’s essential to my practice as a person,” Jane said, “to connect head and heart.” I too believe that the heart connects all the realms: in writing from the space of complete and utter vulnerability. Jane continued with the observation that poetry is the architecture of the imagination that will enrich lives, that gives one a place to call home.

As I listened to Jane, I reflected about body/soul interplay, the intelligence of the heart and of the body. Courage, mes braves!

Phil asks about the importance of ceremony in how I create a space for the muse to enter. Paying close attention to the moment is ceremony enough: presence is the ground of poetry for me. During the Pandemic, it is so interesting how we negotiate these new realities of listening, reading, being with one another virtually, deepening in the moment, even when we cannot meet physically, even though we would rather be sharing a real cup of tea together! What a pleasure to participate in this conversation at Wordsfest. Check out the conversation.

Penn Kemp has been lauded as a trailblazer since her first Coach House publication (1972), and a “one-woman literary industry”. Her latest collection is River Revery, Insomniac Press, with video poems on www.riverrevery.ca. Forthcoming is P.S., with Sharon Thesen, Kalamalka Press. See www.pennkemp.weebly.com and www.pennkemp.wordpress.com.

Philip Glennie is a graduate of the Ph.D. English program at Western University, and currently works as a freelance editor and teacher. He has completed five novels and over forty short stories. He has been a recipient of four Ontario Graduate Scholarships, as well as a Social Sciences and Humanities Research Council doctoral fellowship.