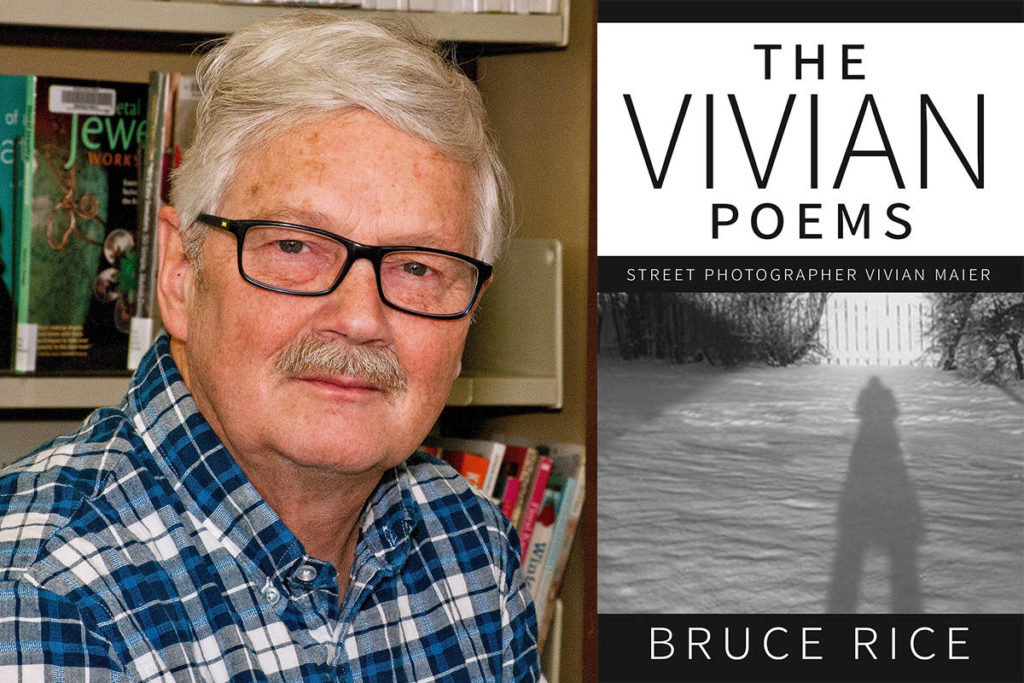 I’d seen a documentary about this woman, a Chicago nanny, born 1926, died 2009, who never seemed to want to display her work, but who saved much of it. It was found after her death. But I’d forgotten about her until reading the preface to Bruce Rice’s latest poetry collection. Oh, that street photographer, I thought, and began to get interested.

I’ve long been an admirer of Bruce Rice’s writing. To me, he is one of the best least known Canadian poets working today. In his books he sometimes writes from a theme or narrative as in his Life In The Canopy, an homage to the city of Regina, or the multi-themed The Illustrated Statue of Liberty, which focuses on madness and immigration among other things, and The Vivian Poems is one of these. According to Rice in the preface “More than anything else, these poems are a translation of what she left us.” He’s looked at the photographs and given his interpretation of Vivian’s life through the poems.

But the first section, Vivian Writes Her Own Prologue, which contains one long poem ‘Making a Spy’ makes it clear that Rice tries to get out of the photographer’s way as much as possible, helping us find her voice. Reading this first poem I was intrigued. A few hints, a few facts – what was coming? Well, it’s all about knowing the right questions to ask, right? So in the next section, aptly titled Necessary Questions, I went to the poem ‘A Necessary Question’ to find out more. “My Rollei shoots from the waist / through it I see / like a child who’s not very tall / and from whom much can be learned:”. She shoots mothers, children, bums, and concludes “there is too much to fix in ten thousand lives / all we can do is put up with it / it’s why I never ask people to smile   myself / I don’t ask for anything”.

Back one poem – ‘a slip of paper in a stack of self-portraits’ – we see that the photographer wishes to be invisible. Rice has her say explicitly “don’t look at my legs / don’t look at my body”. Familial and childhood trauma are hinted at.

In ‘Human River: Vivian Maier’s New York Proof Sheets’, a collection of nine vignettes, Rice links one of them – ‘the man in Bryant Park’ – with ‘A Necessary Question’, the previous poem. The point of view is the man, how he may be a derelict or maybe just disappointed, and it’s winter and he’s cold; the river is frozen. In the previous poem “water is a mirror / if in spring God / were to walk by a puddle in Battery Park / even he would pause to look at his reflection”. Between the two poems we think about spring, winter, God, the man in Bryant Park; God or man’s inability to care for everyone. And the man in Bryant Park/Rice/Vivian speaks: “I must look confused / as if I’ve arrived in someone else’s future // its insouciant hour / and the remains // of a daydream no longer in love / with what lies ahead”.

The other poems in ‘Human River’ often take the POV of the subject of the photo; in one instance the subject turns his gaze on Vivian, saying, “put down that camera // smile lady V” and we hear Rice’s compassionate voice coming through. And a page later in ‘a domestic’ we have a lovely mingling of our own imaginings of the life of a domestic servant with the photo’s mute witness and Rice’s statement: “but humble or great   who’s to judge / what poets know / of the light in the heart of a panther / or the contents of any life but their own”, pulling back as the photographer does, just taking the picture.

Rice really gets into full lyric and rhythmic swing in ‘how Vivian sees it’. This is the last third or so of the poem.

the art she looks at looks back

this is her light which digs its own grave

each dried ring of milk on the boarding house table

there are her Things with a capital T

this is her face refracted

these are the children of the grace she’s abandoned

elegiac in their innocence

everything ends yet her task is endless

and just to conclude my dear iron

I’m not your Sancho   I creak

By now (page 25), I remember what it is to read a Bruce Rice poetry collection and make a note to purchase the two of his six books that I don’t already own.

I could go on throughout the book, but will content myself with talking about three poems which appear at the end of the volume.

‘Proofs of Winter’ has lines like “the colors we invent / are still true colors / known all along to the first light that hits them”; “and so it seems to me my pictures of things / are true things / real as ice / on a clump of hawthorn berries / the same ruby flesh / the same burden”; and “Things I know / I know by walking through them /…and if this wind with its reasons takes me / then we are even”.

‘To the 12,000 Unmarked Graves Under Lincoln Park’ gives us “hallowed the bones / beneath my feet   these catholic dead / a footing for the Archbishop’s house // hallowed the dog that walks here and the roots   grave-fed / of the grass it walks upon”; “some day I’ll lie down like this / grass will grow / Lincoln Park will go on / and her lovely saints too”; and “a lake / a thought or kind of seeing / that has no shore except the last one   and that / well-known to sleeping men”.

And in the book’s final poem, ‘Epilogue: Intestate’, “It comes down to ashes. / If it’s ashes // it’s only the heart’s grey inflections / quite grainy   with ten thousand faces looking this way. // I leave you the audacity / what I saw every day”; “I was almost gone anyway / and I was never that heavy // none of us are / so we may be lifted”; “our common selves worn like a coat”.

See what I mean?

Bruce Rice is a writer and editor living in Regina. He writes about community, reclaiming the voices of those who live on the margins, and how we are transformed by landscape even as we leave our footprints on it.  He has five award-winning books of poetry. He received his second Saskatchewan Book Award for his most recent collection, The Trouble With Beauty (Coteau). In 2019 he was appointed to a two-year term as the Saskatchewan Poet Laureate.