In firmly holding onto the desire to love

and cherish one another we keep faith

with many who have gone before us,

by honouring those we have lost. 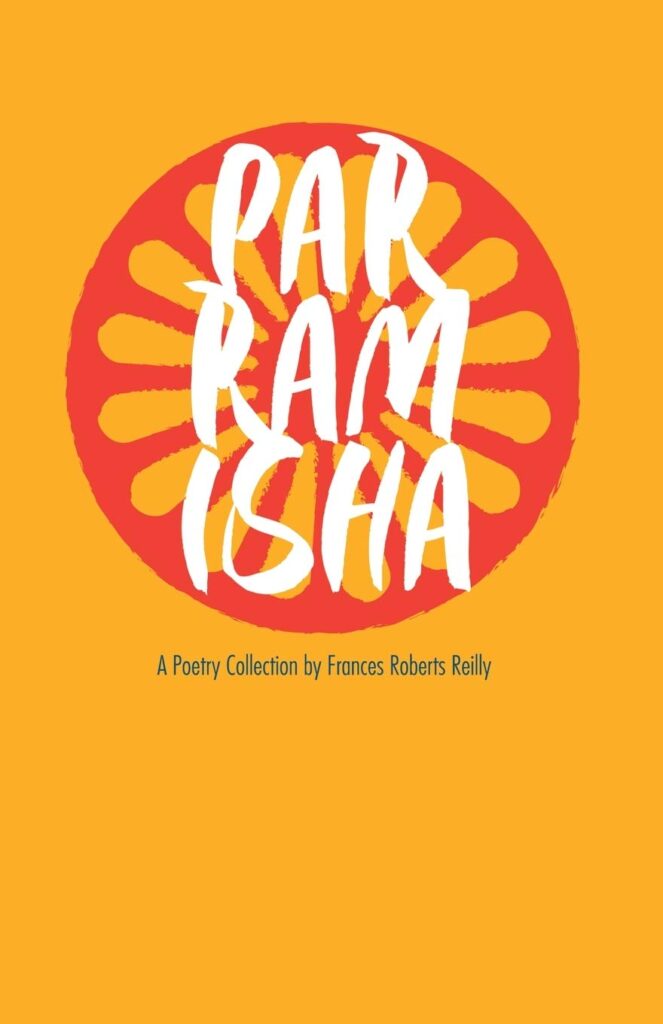 Many poems are written to be engraved into the texture of paper, inked black shadows of what the poet means to say. Others are written to be read out loud, performed before an audience. While the voice of Frances Roberts Reilly can be heard in either of these ways, the poems in this book ask mostly to be read by the heart. These are poems to be read again and again, each time revealing deeper meaning.

The reader’s journey begins, though, with the body that contains these poems. From beginning to end, this beautiful book invites the reader to enter and follow. The cover is striking in its simplicity and, scattered among the pages, Ildiko Nova’s illustrations add their own shamanic beauty to enhance the poet’s word.

The misty lace moon lifts her veil / whispers parramisha – our stories/ Above, the night echoes with poetry rising.. “Patrins”

Opening Parramisha (our stories), “Shukar Romani chi lil/Letter to our Lovely Girl” is an epistolary poem to a Roma girl who lived long ago and died in the Roma Holocaust in Auschwitz. It sets the background for all that follows. Parramisha records the genetic memory of a people whose culture, recorded only in oral histories, had been largely erased yet survives to this day. So, begins Frances Roberts Reilly’s exploration of her Welsh Romany heritage.

“I am a small tributary of these greater beings./Their Gypsy harps play the melody of the mountains./I’ve been circling these peaks for years, practicing/an oration of scale and breadth.”

Later in the same poem, she adds,

”Language must be quarried from our depths./Rappelling into the pit heats up jargon./Mining the depths, water cries over rocks./These are not shamanic stones./They are powerful protectors.”

Here lie the guiding principles of this poet’s exploration of her Gypsy and Romany roots. The 45 poems in this volume rest upon this solid foundation as they tell the stories of one family and, through them, of the Romany diaspora.

Although time is interwoven through these poems to reflect both the past and in some ways the future, the five sections move from a family history perhaps veiled in mists to the present day. This transition is subtle and, if the poems are read in order from first to last, may not dawn on a reader until near the end, or not at all. In this sense of change and growth always rooted in family tradition, there’s an underlying strength.

To discuss the strengths and successes of each of these poems and their rare failings would take a great deal of space. It’s as a body of work that they are best viewed, each poem simply a part of the whole. As a whole, Parramisha is a powerful melding of research and love.

Built upon Reilly’s dedication and craft and the desire to recover her family’s Romany culture, these poems all stand up well. Taken as a whole, the poems weave a wonderful tapestry of an oral culture forced underground for generations. Reilly writes, “I can lock into place this story/and secure all against loss of memory.” The stories told in this book are a solid beginning toward that goal.

You may purchase a copy from: Amazon.ca or from Wordsworth Books, Waterloo.

or you can make payment via Paypal Email: franceswrites@me.com

Frances Roberts-Reilly was born on the Welsh border and grew up in England. She’s of mixed-heritage Welsh Gypsy-English, a direct descendant of Abram Wood and the notable family of Welsh triple harpists, fiddlers and storytellers. She has learned to play three musical instruments – piano, flute and harp. It is the harp that is a direct connection to her four times great grandfather, John Roberts, Telynor Cymru who played harp for royalty, including Queen Victoria. Her great, great grandmother was Mary Ann Wood, a gifted singer and harpist, her great grandmother Winnie Wood sang at venues throughout Wales and her father was Welsh tenor on the London stage. Frances began writing seriously whilst working at BBC television in London, England. After making award-winning documentaries, she earned an Honours degree in English Literature at the University of Toronto. Frances has published numerous short stories, articles and poems. She has an international profile as a Romani writer. True to the spirit of the Romani diaspora most of these poems have already been published internationally in well regarded anthologies in Canada, U.S., U.K., Wales and Europe. Having recently been invited to contribute to the Central European University in Budapest’s Romani Journal she submitted an excerpt from her memoir, Underground Histories. Her play Mad Gwen was produced at She Speaks: Women’s work – Women’s words, A Celebration of International Women’s Day, in Waterloo, Ontario. Her first poetry book is Green Man published in the Stanza Series by The Ontario Poetry Society. The League of Canadian Poets featured her poems for National Poetry Month and Fresh Voices online. Frances has made media appearances as a guest author on CBC Radio and WSRQ Radio, Sarasota. She is a co-host and Feature Producer on CKWR FM 98.5 Community Radio’s show Promenade. Frances lives in Kitchener, Ontario, Canada. She is married with two granddaughters, Luna and Isobel. She loves to travel and often visits Wales and England.

Bob MacKenzie was born in New Westminster B.C. Much of his childhood and youth were spent walking in the woods and along the shores of Alberta and B.C. from our southern border as far north as the Cariboo. He now lives and writes in Kingston, where he enjoys daily walks along wooded paths and on the shores of Lake Ontario and the St. Lawrence River. Bob MacKenzie’s poetry has appeared in almost 400 journals across North America and as far away as Australia, India, Italy, and Greece. He has published 16 volumes of poetry and prose fiction, including somewhere still in wind the tree is bending (Silver Bow Publishing, 2018), On Edge (Dark Matter Press, 2012), and The Little Song (Brandstead Press, 1975). His poems have appeared in numerous anthologies and have been translated into Arabic, into Greek for an anthology widely distributed in Greece, and into Farsi for two Persian language anthologies published in the United States. Bob’s received numerous local and international awards for his writing as well as an Ontario Arts Council grant for literature, a Canada Council Grant for performance, and a Fellowship to participate in the Summer Literary Seminars in Tbilisi, Georgia.
With the ensemble Poem de Terre, for eighteen years Bob’s poetry has been spoken and sung live with original music and the group has released six albums.