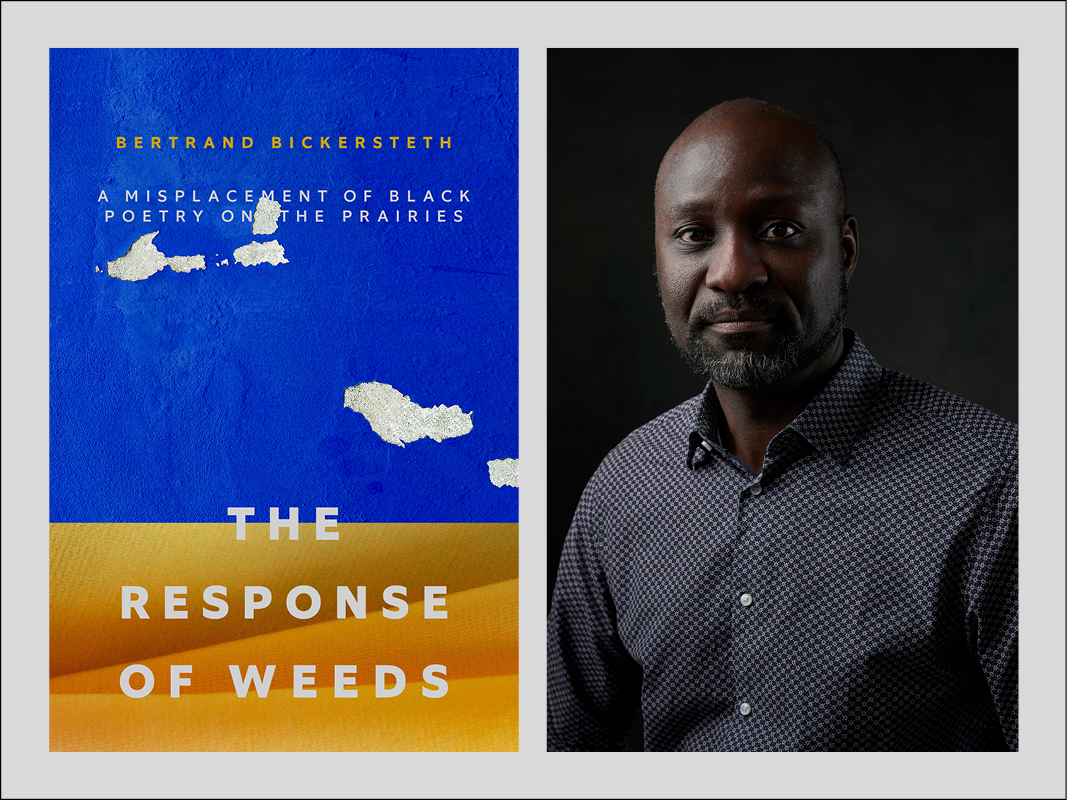 Congratulations to the Winner of the 2021 Gerald Lampert Memorial Award: Bertrand Bickersteth – The Response of Weeds (NeWest Press)!

Thank you to the jurors for the 2021 Gerald Lampert Memorial Award: DA Lockhart, Nisha Patel and Phoebe Wang.

About The Response of Weeds

Bertrand Bickersteth’s debut poetry collection explores what it means to be Black and Albertan through a variety of prisms: historical, biographical, and essentially, geographical. The Response of Weeds offers a much-needed window on often overlooked contributions to the province’s character and provides personal perspectives on the question of Black identity on the prairies. Through these rousing and evocative poems, Bickersteth uses language to call up the contours of the land itself, land that is at once mesmerizing as it is dismissively effacing. Such is Black identity here on this paradoxical land, too.

Born in Sierra Leone, raised in Alberta, and formerly resided in the U.K. and the U.S., Bertrand Bickersteth is an educator who also writes plays and poems. In 2018, he was longlisted for the CBC Poetry Prize. His debut collection of poetry, The Response of Weeds, was published in 2020 and was named one of CBC’s best books of poetry for the year. He was also named one of CBC’s six Black writers to watch for in 2021. His poetry has appeared in several publications, including The Antigonish Review, Cosmonauts Avenue, and his nonfiction is forthcoming in Prairie Fire (2021). He lives in Calgary, teaches at Olds College, and often (always, actually) writes about Black identity on the Prairies.

Bickersteth’s vision powerfully highlights the erasure of Black communities in the Prairies and claims those histories and presences in the movements of land. The Response of Weeds is a work of research of a stunning range, occupying a powerful space in Canadian poetry. It reveals through its polyvocality and song-like lyricism the stories that no one else can tell but that generously involve and include the reader. Bickersteth’s work re-inserts the presence of Black subjectivity into “an easing confluence/ that confuses complaint in this country” that makes us realize what we lose by not attending to these dramatis personae of invisible men and women, made visible by his vivid figuration.

We asked Bertrand a few questions about writing, inspiration and -of course – poetry. Learn more about how The Response of Weeds came to be and more about Bertrand Bickersteth below!

I have two audiences. First, I write to work out ideas, feelings, experiences for myself. Poetry allows me to rearticulate them in a way that solves a problem for me or reveals a new approach. In this sense, it is a form of therapy for me (but also a kind of philosophical puzzle).

My other audience includes Black youth (and young people of colour more generally) who, like me when I was young, need a model, something to show them that writing and literature is not just the purview of white people, but belongs to them too. When I was young, I occasionally glimpsed the path on the other side of the river but I had no one to show me the way. I like to think of my poems as the bridge to the other side of the river for them.

Gwendolyn Brooks, from Maud Martha: “But he keeps looking at my color, which is like a wall.”

I love this sentence for the clear-eyed awareness it demonstrates. And, actually, it is a sentence that I do live in.

I write first drafts by hand. I then transfer them to the computer when I feel they’ve reached the “first draft” stage. I like the organic connection of pencil (I often write with a pencil) to page. I also like seeing the poem develop palimpsestically (is that a word?) from the crossed-out words, revisions and rewritings that are equally present on the page. I also really, really love to discover an old notebook showing the process I went through with a now “finished” poem. To be honest, I don’t think there’s anything special to my habits here. I think it mainly comes down to being old.

All of these poets showed me how to draw out history and show it’s direct presence in our daily lives. They also, obviously, validated my voice as a Black poet who can legitimately belong to the arena of literature.

At first, I was going to say that it would be in an unusual room like a vestibule or a library or secret room behind a clever wall, but actually those are rooms in wealthy houses. My poetry is in a poor house. It is a house with no interiour walls at all, except, ocassionally, a makeshift curtain contrived for certain privacies. Otherwise, we are all exposed to everything. Sometimes we find the human proximity stifling for its inescapable human odours, its intolerable closeness. Other times we find it comforting for its familiarity and deep sense of belonging. It is both a jumble of rooms and a single room that collapses all into one. Others might struggle to identify it as a “real” room, but we who live in it know better. That is my poetry.

I think poetry encourages people to rethink their relationship to language and in so doing to see new possibilities in the world. I think poetry teaches us to read humanity, and specifically to apprehend humanity (empathy, imagination, love) in the most unlikely, inhuman spaces.

Nasra Adem (aka NASRA), a queer, Black, Muslim, Oromo/Somali woman whose poetry is doing all of those things I mentioned above. They are an all-round creative, too, and has helped to promote Black arts in Edmonton through the Black Arts Matter festival, which they founded. But don’t just take my word for it, listen to this:

A little Black girl practices choreography on a Brooklyn street corner
full the fuck out because (i know she knows)
Missy Elliott is making music videos again
i watch her turn her body into an impossible octave [love that!!!]
shake high, drop low, roll everything in between
in a tight 8
suddenly i’m 10 and desperate to stunt
“chicken noodle soup” it
“shaa boo ya sha sha sha boo ya roll call” it
Beyonce circa Dangerously in Love (“oh oh ohh”) it

That was taken from the poem “Birthright” in their chapbook, A God Dancing in Human Cloth (Glass Buffalo Publishing, 2019). Isn’t it stunning? (Yes.) Watch. This. Space.

What is the backstory and inspiration behind your award-winning collection?

As I said above, I needed to work out some ideas for myself, namely the question of Black identity on the Prairies because blackness is not considered a legitimate part of the Prairies. I am from Alberta but I have never been allowed to feel like I am from Alberta. (I want to point out that when I was very young, 9 or 10, I had a fervent love for this province, but I regularly met with a rejection of those feelings and eventually I became bitter and discarded them altogether.) There is, however, a rich Black history that belongs to the Prairies. I wanted to highlight the legitimacy of Black belonging by revealing the richness of this history and also connect this Prairie space to the wider North American Black Diasporic experience.

There was a moment in which I was inspired to write these poems. I had been living out of the country but on visits back I would wonder at the expansive sky and the pervading presence of agriculture. On one of these visits, we were driving through a rural area and I noticed a type of wheat that I had never seen before. I was struck by the fact that I had a “familiar” wheat in my consciousness, but also by the fact that this strain of wheat had unusual colours and very fuzzy-looking tops. I thought to myself: “this is wheat has colour and Afros!” That thought stayed with me and began a process in which I could start to see elements of myself within the landscape itself.