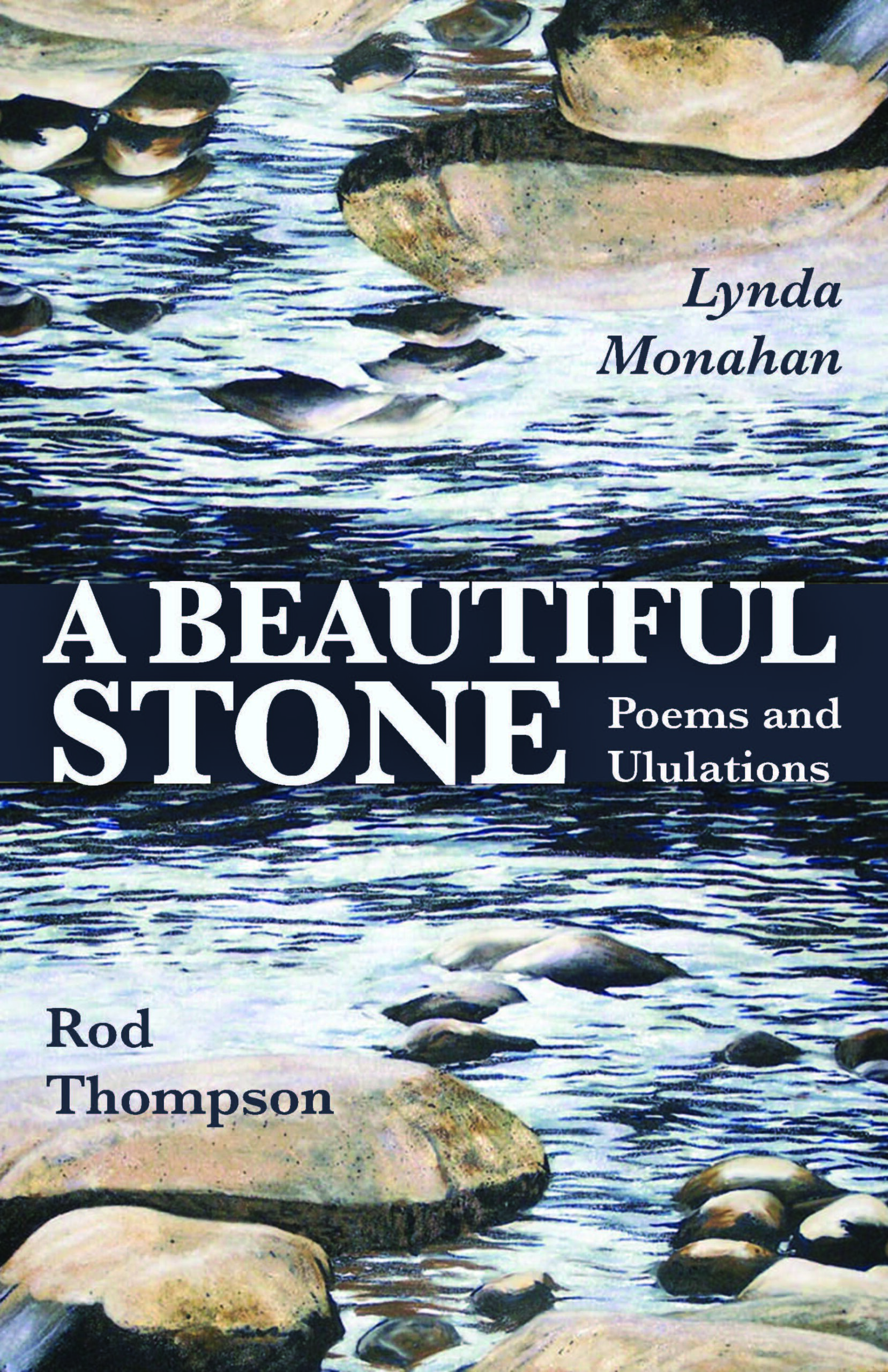 After reading A Beautiful Stone, and then the poem on the back cover – ‘Following the Way’ – four stanzas, eight lines – it occurred to me that I could have just read that one poem then written this review. I’m not being cruel or facetious. Let’s unpack the poem together.

What do we do along the trail? “We” are “talking family, stopping to touch / the bark of balsam, taste low bush cranberries.” So we have family in the first line. How universal is the experience of family? Even those bereft of one (and the poets get to that in many of the linked verses in Ululations, the final section of the book) create families of friends, of community. And then the senses: touching a tree, tasting fruit.

In two lines we have a particular and/or universal we; a reminder of our closest relationships; the physical world. And the next stanza opens up the conversation. “What is it about love, we wonder, why does it hold / such hurt?” The answer is because love holds, implicit in its blessing, eventual loss. (More on loss later.)

Not that the poets make such a bald statement. No, they immediately switch back to the sensual world. “We are like the geese, always on our way // to breeding grounds or a safe wintering place, always / following the way, bound together, mindful of deadfall.”

Love, food, companionship – all difficult to attain and all to be carefully protected. That ominous word three quarters of the way through the poem – deadfall. I extrapolate two meanings in the context of the poem. One, and this is a rural experience, occurring every fall above the fields of the villages near where I live, the geese, shot by farmers, falling out of the sky. And two, the pedestrian we on a wooded path, tripping over dead stuff on the ground. (And we all trip. And fall.)

But of course I also resort to the dictionary where I find neither of my interpretations, but rather, this: deadfall: a trap so constructed that a weight (as a heavy log) falls on an animal and kills or disables it.

So, the world is a place where one must be constantly aware in order not to be crushed. There is an idyll to be had but it is hard won. It is left to the poem’s last two lines to give us some comfort. They begin “We gather moss for stone egg nests,”. Curious activity. Not the moss gathering per se, but its purpose. Why build nests for stone eggs? I mean, the book’s title is A Beautiful Stone…oh. And I remember one verse from one poem – ‘Hiking’. (Okay, I’m cheating here, referencing another poem, but I did say I’d already read the book.)

From ‘Hiking’: “a beautiful stone / is more so / when touched”. And this poem, I recall, was about writing. So the moss is to cushion the stones which are the poems, perhaps? And where do the moss and stones wind up? (Apart from in a book, of course.)

“We gather moss for stone egg nests, carry them home, / our journeys end – foul weather or fair, always home.” Home, in the physical sense, where we are safe. And home in our poets’ heads and hearts, where the precious stuff lives.

Now we’ve read the back cover together, let me talk a bit about the rest of the book.

How do I write about the poems in A Beautiful Stone? The book is by two poets, but whether each had a hand in each poem, or whether one is by one and another by the other, they’re not telling. The mingled ‘I’ of a couple.

The back cover poem discussed above – ‘Following the Way’ – appears in the first section of the book – Choice of Light. These are lyric/elegiac poems about people in forests and by rivers. From ‘Stories for His Funeral’:

the record trout and the song

of the river that day

he saw a skim of crimson fox

in the soft mouth of the wind.

“a skim of crimson fox” – lovely, no? From ‘His Last Eden’ about a great grandfather:

In his last Eden, exhausted and alone,

with a pistol to his head,

the reason he opened the door

was because it was just a door,

and he wanted whatever was behind it –

the first place with no promises.

And in ‘Inheritance’ the poet wishes they had “a grandmother’s hug kind of heart”. But they have an “old aching kind of heart / that runs from others / to a shack trapping sage brush.” Self-knowledge.

The rest of the book (two more sections) is made up of linked verses using what look to me to be Japanese forms. Section two – Loon And I – is alternating five line verses, every other verse set in italic to differentiate the voices. Section three – Ululations – contains verses of four lines followed by a haiku. Then another two verses follow in italics, indicating the other poet. And so on. I’ll leave it to others who know about such things to decide whether these are traditional forms or modern variants, and stick to the useful catch-all of linked verses when discussing these cinquains, quatrains and tercets.

Section two – Loon And I – is less than twenty pages of call and response – cinquain to cinquain – and I re-read it with pleasure.

‘Glances’ contains the back and forth between lovers. ‘Loon and I’ describes the alternate pleasures of aloneness and togetherness. ‘On This Road’ speaks of the struggle against depression, as one voice observes, the second suffers.

‘One More Winter’ describes the last part of a father’s life with the beautiful ending:

did I treat your mother well?

Beautiful because, as the adult child being asked, what else are you going to say but the yes the poet leaves unspoken?

From ‘Run of Sun and Shadow’ the lovely verse four:

of sun and shadow

my boat learning to fly

And the delicate ‘Sanctuary’, in which the couple describe their morning ablutions on the day of a funeral.

Ululation is the third part of the book and here are the linked verses with the tercet (or haiku) repeated after each quatrain. (Rarely are there different tercets throughout a sequence. And even more rare is to find the tercet pared down to a couplet or even a single repeated line.)

Here are some samples I particularly enjoyed. From ‘Aftershock’:

it was a secret

she promised not to tell –

their forty-year friendship over

the way an earthquake

From ‘The Asbestos Forest’:

against the first question –

From ‘The Delicate Balance of Two’:

the delicate balance of two

Halfway through Ululations, the poems begin to sound notes of loss and regret. In ‘Holding On’ the loss of friends, community and health is poignantly told. In ‘Ululation’ are these beautiful two verses:

on this brittle winter day

on the distant highway

to the rise and fall

And from ‘We Cannot Know’ comes this refrain: “all the what if’s / throwing fuel / on the fire of my worry”.

The poets throw us a line (or two) of hopefulness in the last couple of poem sequences in the book. ‘Gifts’ is a sensual list poem of what they have to be thankful for. And we are back to seeing, touching, tasting, hearing and smelling as well as dreaming about the world. “small pleasures / in the palm of my hand”.

And the last verses of the last poem – ‘Understory’ – are these:

run in the pines

just run in the pines

trade their breath for yours

this path winds through these hills for us

Lynda Monahan Author of three collections of poetry, A Slow Dance in the Flames, What My Body Knows, (Coteau Books) and Verge (Guernica Editions). She facilitates creative writing workshops and has been writer-in-residence at St. Peter’s College facilitated retreat and the Victoria Hospital in Prince Albert, Saskatchewan. She is editor of Second Chances: stories of brain injury survivors, Skating in the Exit Light, a poetry anthology, and With Just One Reach of Hands, an anthology of the writing of the Canadian Mental Health Association’s Writing For Your Life group, which she also facilitates. She recently finished a term as writer in residence at the JM Culenaere Library in Prince Albert, Saskatchewan.

Rod Thompson lives in the forest west of the city of Prince Albert, Saskatchewan. He has had his poetry published in a number of literary magazines including Grain, Transition, Blue Jay and The Prairie Journal. He has long enjoyed writing tanka and haiku and his tanka have been published in American Tanka, Lynx, Tangled Hair, and most recently in Atlas Poetica, an American tanka.